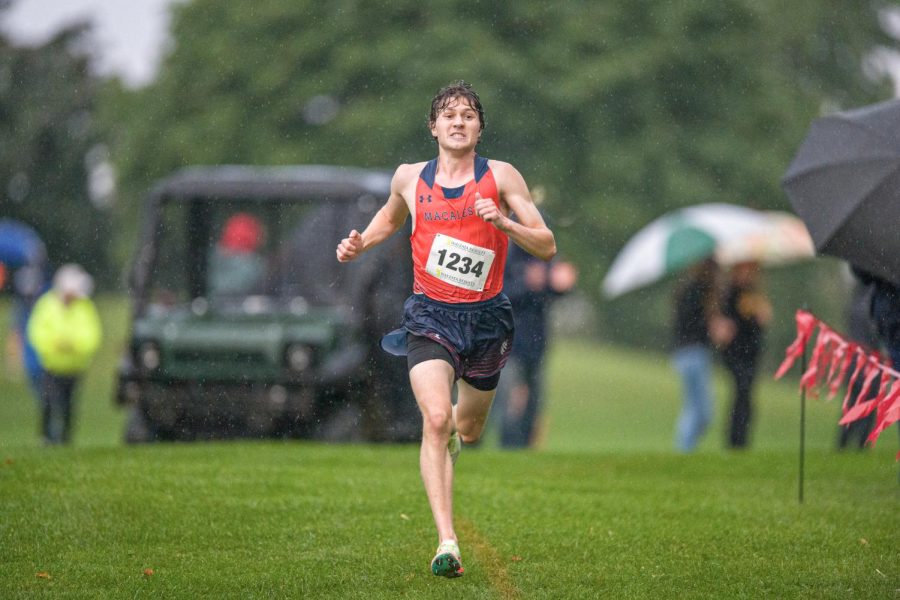 On Sept. 9, Macalester men’s and women’s cross country teams held their own against the best of the conference at the MIAC Preview Meet. A string of personal best times led the Scots to impressive finishes. Both the women’s and men’s teams placed solidly in the top half of the teams at the meet, and several individual runners were among the top finishers.

The cross country season is not structured like most other sports. Until the MIAC championships on Oct. 29, success cannot be neatly measured with a win-loss record. Success is found in the tweaks and improvements the runners make week after week. The four meets on the Scots’ regular season schedule are separated by long stretches reserved for training, so the early meets are often seen as useful benchmarks for a team’s performance. Competitions like the MIAC Preview Meet give athletes a chance to see where their training has brought them as they continue to prepare for the crucial end-of-season championship meets.

“We want to be at our best at the very end … the regular season has value but it’s really about being at your best at conference and at regionals, and ultimately hopefully nationals,” Head Coach Daniel Schofer told The Mac Weekly.

The team is preparing diligently for the MIAC Conference Championships. Sept. 9’s MIAC Preview Meet was held at the Highland National Golf Course, the same site as the conference meet. This presented the Scots with a unique opportunity to put their months of training to the test on the very course where, on Oct. 29, it will matter the most.

The men’s and women’s cross country teams passed their test with flying colors. The men’s team finished 2nd out of six teams, falling short only to Carleton, who has won four consecutive MIAC cross country titles. Nick Ihrke ’25 was the first Scot through the line, finishing fourth with an 8km personal record time of 25:31.1. Next was Reece McKee ’25, finishing the race in 25:48.6 for ninth place.

The women’s team took fourth overall out of 10 teams, and finished just two points short of the top three. Maria Blaesing ’24 was the Scots’ top finisher, placing 12th overall and completing the 5.9km course in 23:10.42. Other impressive performances included Sky Thedosopolous ’26, whose 23:16.63 earned her 15th place. The women’s cross country team’s stellar performance earned them a spot in the USTFCCA North Region rankings for the first time since 2018.

Schofer, now in his fourth season at Macalester, sees the team’s recent successes as part of a larger training plan.

“We’re training pretty hard in preseason, but I’d say it’s pretty general, and then the training progresses to become more race specific as time goes on so that we are gradually approaching our peak fitness,” Schofer said.

Schofer’s athletes have found success because of his ability to adapt the training plan to the needs of individual athletes.

“I’m always trying to find what works with each individual,” Schofer said. “There’s some overarching things that I try to hold to, but everyone’s unique – not just in terms of their physiology, but their psychology and their mental approach, and also their backgrounds. Two runners may be the same on paper, with the same best times, but they come from different places.”

The team’s goals for the season do not end at the conference meet; Macalester’s top runners have their eyes set on reaching the highest levels of collegiate competition. Two weeks after the MIAC conference championship is the NCAA North Regional on Nov. 12. The top two teams at the regional meet are rewarded with an automatic bid to NCAA nationals in Lansing, Mich.

In the meantime, the team will continue their gradual training process here in St. Paul.

“We’re fortunate, we have great places to train here,” Schofer said. “I do think that factors in, even in cross country where we’re not using on-campus facilities much. Just running in a scenic place, along the Mississippi River or just a beautiful park, does enhance the experience.”

After two weeks away from competition, Macalester’s mens and women’s cross country teams will head to University of Wisconsin-Eau Claire for the BluGold Invitational on Sept. 30.