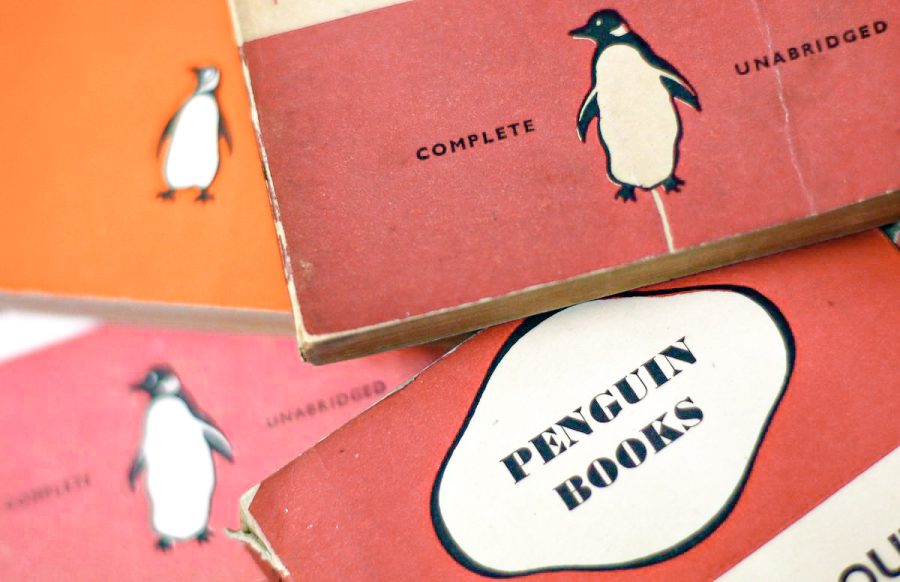 Penguin Books in a used bookstore in London October 29, 2012. Photo taken by Stefan Wermuth and courtesy of Reuters.

In Nov. 2020, Penguin Random House (PRH) announced that it planned to buy Simon & Schuster (S&S) for almost $2.2 billion. This was big news for the publishing industry: PRH and S&S are already the two biggest publishers in the United States.

Despite there being books in what seems to be nearly every corner of the world, this industry — the modern method through which books come into being — remains rather unclear to readers and authors alike. People know that someone writes a book and then suddenly it sits with its glossy new cover on the shelves of their favorite local bookstore. However, this process is more nuanced than first meets the eye.

The industry is dominated by five large publishing houses — Macmillan, Hachette Book Group, HarperCollins, PRH and S&S. These publishing houses, otherwise known as the Big Five, take up 90% of the market for bestselling titles. Each of the five companies are split into many smaller publishing houses that specialize in certain genres and niches, called imprints. PRH is owned by the German company Bertelsmann and is the largest publisher by a significant margin: they publish over 2,000 books a year and have more than 90 imprints. One of PRH’s most notable imprints is Crown Publishing, which has worked with authors like Gillian Flynn, Andy Weir, and Ernest Cline.

There are also many independent publishers and smaller presses that vary widely and operate differently from the Big Five — CoffeeHouse Press and Graywolf Press are two that can be found in the Twin Cities. Small presses look for talented and original writers of all kinds, whereas the Big Five focus mainly on what has proven to sell the most.

This merger by PRH is not the first time the publishing industry has seen companies merge. Penguin has combined with Random House, News Corp has acquired romance book publisher Harlequin and Hachette Book Group has purchased Perseus Books.

When PRH announced their plan two years ago, however, they experienced a lot of pushback. The Department of Justice (DOJ) filed suit in Nov. 2021 in an attempt to block the deal from going through. This was made as part of the Biden Administration’s antitrust policy, and along with PRH, this effort also addressed Meta and UnitedHealth Group.

The main concerns of the DOJ had to do with further consolidation in an industry that has been already shrinking in the past decade. PRH and S&S just finished a three-week high-profile trial in mid August, and Judge Florence Y. Pan will decide this fall if PRH can go through with the deal.

Steve Woodward, a visiting instructor of English at Macalester, worked at Graywolf Press for 12 years; he started as an intern and eventually became a senior editor. He doesn’t think the DOJ will let the merger go through and suspects that, even if this is the case, HarperCollins will end up buying S&S instead. Basically, a merger of some kind will likely happen no matter what.

The merger trial focused primarily on anticipated top-selling books: books with advances of at least $250,000.

“So the argument effectively left out the typical low to mid-five book deals that happen in the industry every day,” Woodward wrote in an email to The Mac Weekly. “Also you can never really know if a book is going to sell, so focusing exclusively on advances leaves out everything that goes into publishing a book.”

The DOJ also worries that the PRH and S&S merger could reduce competition in the publishing market. Bidding wars would become less frequent, authors would be less likely to get large advances for their work and there would be an overall downtick in creativity and diversity among books. The DOJ writes that it could  “put Penguin Random House in control of close to half the market for acquiring publishing rights to anticipated top-selling books, leaving hundreds of individual authors with fewer options and less leverage.”

“I do think [the merger] would mean layoffs,” Woodward wrote. “There will be fewer people to sell books to after the merger and the inevitable realignment happens … This means, in the end, less choices for the author-reader.”

PRH, however, disagrees, claiming that the publishers will still act as separate entities: their various imprints will continue to bid against each other, and PRH and S&S claim they will combine their resources to create even better deals for authors.

In an interview with the New York Times, literary agent David Kuhn explained how this deal could have a domino-like effect throughout the publishing and book world, one major implication being that publishing will get even more competitive for debut authors.

Woodward believes this merger — when considered with the many other mergers that have occurred over the past decade — says something about the market of today’s publishing industry.

“[E]ven a company as big as PRH feels threatened in today’s competitive marketplace,” Woodward wrote. “They’re attempting to create a company big enough to be able to dictate terms, as Amazon has done.”

Paramount Global (previously ViacomCBS) is the owner of S&S, and their sale to PRH would help with the $21 billion the company has in debt. Paramount Global already owns Paramount Studios and Nickelodeon and likely is moving more toward streaming services and away from books. Jonathan Karp, the chief operating officer at S&S, would remain in his current position, and the company would preserve its editorial autonomy and practices after its purchase.

When it comes to small presses, Woodward doesn’t think the merger will affect them much at all.

“Small presses exist to offer an alternative to corporate publishing, so while they may not be able to alter the shape of the publishing landscape as dramatically as a giant merger might, they can and do hold sway in other areas that even those conglomerates have a hard time matching,” Woodward wrote.

The merger trial, however, didn’t omit discussion of small presses altogether. PRH referred to them as “farm teams,” which Woodward finds telling of their overall position in the industry.

“​​Not only does this term display the superior attitude big publishers have, it shows that they view small presses as places that they can extract value from,” Woodward wrote. “This overlooks the mission-driven nature of small press publishing, as they have values that often don’t align with those of the Big Five.”

Judge Pan will make the decision in the coming months. To follow along with what happens next, go to https://www.publishersweekly.com/