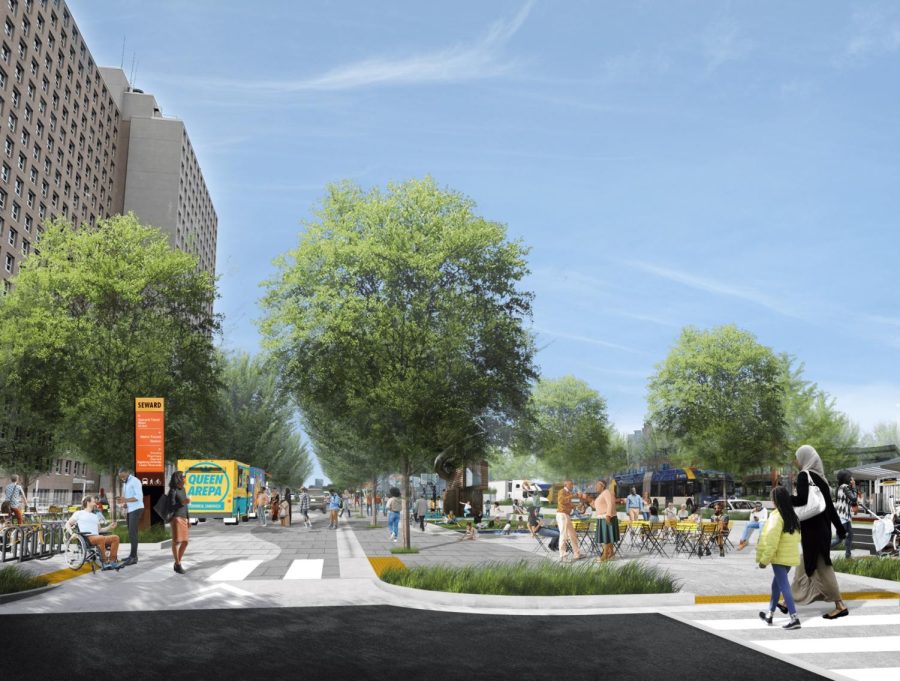 A design envisioning the boulevard that could replace the I-94 freeway. Photo courtesy of Our Streets Minneapolis.

As Twin Cities residents, we are currently in the midst of a unique opportunity. The I-94 freeway, initially built in the 1960s, is so old that small repairs can no longer maintain the freeway — 7.5 miles of the freeway going through the Twin Cities are going to be completely rebuilt. Because they are going to rebuild the freeway from the ground up, the Minnesota Department of Transportation (MNDOT) is currently “Rethinking I-94.”

As they consider options for this construction project, MNDOT may choose to rebuild the existing freeway and accept the same conditions and infrastructure as we’ve had for the past half-century. They could also, however, choose a better future.

Over 50 years ago, the construction of the freeway bulldozed many miles of land, devastating neighborhoods such as St. Paul’s primarily Black Rondo neighborhood and Minneapolis’ immigrant-heavy Cedar-Riverside neighborhood, and helping to enshrine car dependency in our urban ecosystem. For decades, there has been little recourse, as land taken for the freeway has never been returned to its previous residential and commercial uses and the freeway has drawn thousands of daily car trips, with their corresponding carbon emissions and particle pollution. The residents of areas along I-94 are disproportionately likely to be people of color, below the poverty line, have asthma and have no car in their household.

Some advocates in the Twin Cities are taking advantage of I-94’s first complete reconstruction, pushing for a vision called the “Twin Cities Boulevard.” With this proposal, MNDOT would fill in the freeway and create an urban boulevard. Instead of the wide freeway, we might see just a couple of lanes for cars, and this newly-freed space would offer room for a new public transit line, thousands of units of housing, local businesses and community spaces. It would be a transformative change.

Our Streets Minneapolis, the primary organization behind the Twin Cities Boulevard, is currently advocating for Minneapolis and Saint Paul to apply to the Reconnecting Communities Pilot Program. This recently-created federal program offers funding for localities to study the impacts of projects that ameliorate historial freeway damages, and the Rethinking I-94 project — including the Twin Cities Boulevard  — would be eligible for this funding.

Resources to evaluate a freeway-to-boulevard conversion, which could come from this grant, are essential. This would allow us to thoroughly examine how different plans might meet goals such as reducing air pollution, restoring neighborhood walkability, putting freeway land back into communities’ hands — and doing it all while preventing displacement in the surrounding neighborhoods. It would help us work to understand how other cities have enacted freeway removal programs, and learn from those examples.

Alex Burns, the Transportation Policy Coordinator at Our Streets Minneapolis, told me that he commonly encounters people who are hesitant about removing the freeway; perhaps they fear that freeway removal might worsen traffic across the city; perhaps they rely on I-94 as part of their commute and wonder how they’d traverse the Twin Cities without the freeway. These are reasonable questions that we should seek to investigate — and another reason why getting the cities to apply for this study is so important. Answering complex questions about transportation behaviors and traffic equilibria will require substantial resources. This grant is one of the best opportunities to do so.

Disappointingly, policymakers have been hesitant to consider a freeway-to-boulevard conversion. When an entity applies to the Reconnecting Communities grant, they choose the scope of their proposal — they may or may not consider freeway removal.

“The city [of St. Paul] is likely going to be applying for a grant. The thing that still hangs in the balance is determining what the scope of that application is going to be,” Burns said. Meanwhile, Minneapolis appears entirely uninterested in alternative proposals, and doesn’t plan on applying for a grant at all.

The hesitancy of politicians in both Minneapolis and Saint Paul to apply for this grant appears to be an act of status quo bias. That’s unfortunate, because while applying for this grant could help fund informative research, it doesn’t bind anyone to particular plans. If further investigation revealed that a highway-to-boulevard conversion would have large downsides, then policymakers could change course and support a more modest change. But either way, we need to take actual steps to examine such a change before we reject it out of hand.

“We’re at a really good point where all the options conceivably are on the table. So now is the time to start bringing in that expertise to explore options like a highway-to-boulevard conversion that aren’t traditionally on the table,” Burns said.

If the cities don’t apply for the Reconnecting Communities Grant, MNDOT will continue moving through the Rethinking I-94 process, and they are likely to be drafting designs by the time that applications for this grant reopen next year. In other words, if nobody applies to get these study funds now, there will be little benefit to applying later, and we will lose our opportunity to pay freeway removal the attention it deserves.

Some might remark that freeway removal is a radical choice. But as Burns pointed out in a presentation at Macalester last spring, plowing a freeway through the Twin Cities and destroying neighborhoods was quite a radical decision, too. For the past half-century, the consequences have been immutable. We could choose to double the lifespan of I-94, or we could finally take meaningful steps to address the freeway’s many damages. The consequences will play out for generations.