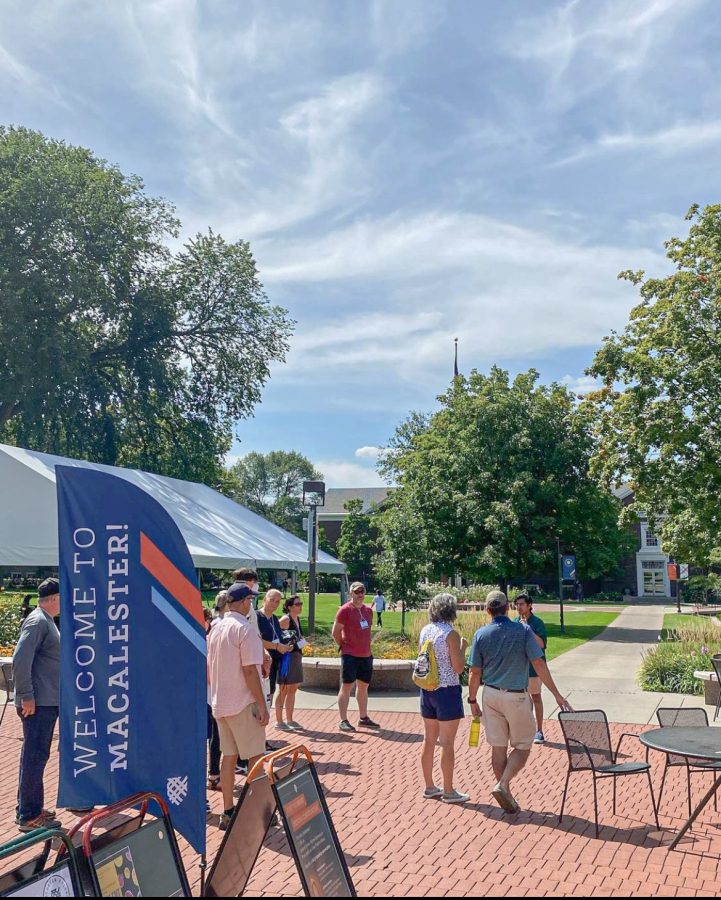 On Friday Aug. 25, Macalester’s newest class arrived on campus. While some students moved in earlier for various activities, all 556 members of the Class of 2026 united on campus for the first time ever that afternoon. Members of the class came together from 44 states around the US, including Washington, D.C. and Puerto Rico, and from 48 other countries around the world.

The reasons the Class of 2026 chose Macalester ranged from the fact that Mac is a smaller, liberal school located near major cities, to the student body’s history of political engagement, to Macalester’s beautiful campus.

Violet McCann ’26 chose Macalester for the progressive tendencies of the school. She was concerned about people on campus only engaging with issues to give themselves a pat on the back, and didn’t see a lot of that at Mac when she made her decision.

“I wanted to go to a school that was progressive and went along with my values,” McCann said.

An international student with dual Norwegian-American citizenship, Xander Hall ’26, came from a United World College (UWC) high school and looked for schools that would continue to keep him immersed in a multicultural environment.

“Essentially I wanted something a bit similar, a bit of a more diverse environment in terms of backgrounds, ethnicities, nationalities. I feel like I still have a lot to learn of other cultures and perspectives,” Hall said. “… It’s very liberal. It’s very up for speaking your own opinion and being able to express yourself very freely.”

Yvan N’guettia ’26, an international student from Abidjan, Ivory Coast, arrived on campus early for Lives of Commitment (LOC). He admitted he was a bit overwhelmed by all the paperwork he had to do soon after he arrived in the U.S. and did not have much time to socialize, but eventually got the chance to bond with his peers during PO4IS.

“We started getting to know actual people, not like filling out papers like talking to mentors, talking to other international students, learning about them, knowing them,” N’guettia said. “ … People here are politically engaged, and that’s something I really, really, really appreciate.”

Skye Sun ’26, an international student from Xuzhou, China, considered PO4IS and orientation helpful in different ways. PO4IS helped her to adjust to living in the U.S. whereas the regular orientation gave her the tools and lessons to thrive at Mac.

“For international orientation, it’s more focused on how to adapt to a new country, how to adapt to a US life. What’s kind of like certain rules you have to follow or culture differences from our own cultural background,” Sun said. “… The second one made me get to know how it feels living at Mac.”

After a few days of PO4IS, domestic students arrived in a flurry of activity on Aug. 25. Despite the hectic nature of the day, Thavida Johnston ‘26 from Madison, Wis, said that move-in was smoother than she expected.

In terms of orientation itself, Johnston felt it was chaotic but she really enjoyed the activities.

“We got everything up to the room like without major damage, so that’s always great,” Johnston said. “… It did feel like it set me up to kind of be able to function around campus.”

For Caly Hanson ’26, orientation was an extremely stressful experience, and they ended up not attending some of the events because they felt too overwhelmed.

“[Orientation] felt like it should have taken a few more days than it was, but they were shoving it into that tiny weekend,” Hanson said. “I was so exhausted with all the people around, I couldn’t handle it by the end”

Hanson explained that the timing seemed strange and rushed during orientation, and that a lot of the bigger presentations could have been either online or done in smaller groups to accommodate for people who are neurodivergent and might not be able to handle a larger crowd.

In spite of this, the Class of 2026 has already begun to form new memories in the first few weeks of campus. One big event that stood out to the students interviewed was the Class of 2026 Talent show. A band, made up of various students including McCann, played a song from Green Day, which Johnston recalled due to a quasi-mosh pit forming by the stage during the performance.

Not all memories are as intense as a mini rock concert, but they were just as meaningful to the students interviewed. N’guettia, through LOC, got the opportunity to visit the Danish American Center in Minneapolis and had a heartfelt moment with his peers.

“We did an activity that we called sharing something special to you, like something that might explain your commitments. And I had the opportunity to learn more about my peers because they shared something that they valued and something to explain why they want to be committed to the community,” N’guettia said.

“… It was a deep moment of reflection, of connection with people. We didn’t even know each other before, but we’re always … sharing something that they cared most about, and that was amazing,” he continued.

Hanson shared that they frequently have breakfast with their friends before class starts and some of their favorite moments have been these breakfasts.

“Since we all have the same class in the morning together, we all get to eat together and it’s like a big table with people that I all like and will vibe with,” Hanson said. “… That’s one of my favorite memories.”

While everyone has been getting adjusted, there have been some issues that the students have faced. Johnston mentioned that it has been hard to make friends but that she remains optimistic and aware that these things often take time.

Some of the international students experienced culture shock upon arriving in the U.S. Hall and Sun both mentioned American tipping culture as something that surprised them. N’guettia also brought up a steep language barrier he faced when he arrived and the lack of people he can talk in his native language of French with.

When asked what their goals for the year are, students gave a variety of answers. Hanson wanted to focus on passing all of their classes. Sun, however, said she wanted to enjoy the first semester and to not push herself too hard.

Hall took a moment to think but settled on a final answer that summarized his goals for the semester.

Hall said, “To work hard and do well, but not over push yourself and just take it easy and enjoy the first year.”