Students and staff stand together against far-right protesters 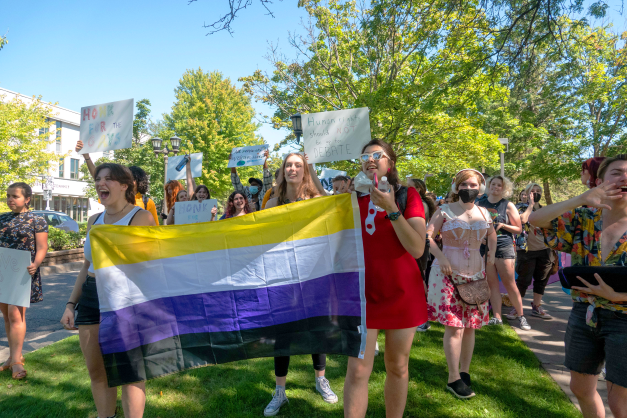 On Sept. 1, while Macalester students gathered for First Thursday, two people unaffiliated with the college came onto campus with signs filled with far-right, conservative Christian views, and the Macalester community came out in full support against them.

The protesters held signs and shouted anti-LGBTQ and anti-abortion slogans, harassing students passing by. In response, over a period of three hours, 50-70 Macalester students, staff and faculty gathered to drown out the hateful messages of the protesters.

The two members knew their legal rights and stayed on the sidewalk parallel to Grand Ave. outside Macalester’s property, and thus were legally within their rights to protest there and not be removed by Public Safety.

The same two people had come to campus in 2019 with similar signs and messages.

Students did not give the protestors the violent reactions they may have been looking for. Instead, students responded by proudly displaying their identities and beliefs with flags and signs.

“I understand that they were most likely looking for a reaction,” Ian Wanger ’25 said. “So I went back to my room and I got in full drag. For me, the most important thing was to be visibly queer as that is itself a protest.”

Many followed Wanger and joined in the counter-protest, bringing their speakers and pride flags. A lot of attention was drawn to the protests as students exited First Thursday around 12:45 PM, causing a swell of students to begin counter-protesting.

First-year students described what it meant to see such a strong show of support for the LGBTQ+ community within their first days here.

“It was really nice,” Scarlette Dunning ’26 said. “It felt very supportive and was a wonderful show of community.”

According to many of the counter-protesters, their main goal was to drown out the protesters.

“It was extremely triggering for a lot of people,” Wanger said. “My main goal was to try and obscure that message.”

Students were not the only ones present at the protest. Macalester staff and faculty came and offered support both physically and mentally.

In an email sent to the student body roughly 24 hours after the event, Associate Vice President of Student Affairs and Dean of Students Kathryn Kay Coquemont wrote:

“I am proud to support a diverse and caring student body, many of whom are passionate about liberatory justice … I hope you’ll do the important work of seeking community and connection in which self-exploration and identity-exploration can unfold in meaningful and supportive ways.”

The staff present, including Coquemont, aimed to make sure all students were safe and getting their needs met.

“My first concern was ‘are our students safe?’” Coquemont said. “Are our students feeling like they have the support of being able to share what their opinions are?”

To address all these issues, Coquemont, along with religious leaders on campus such as College Chaplain and Associate Dean Kelly Stone and Associate Chaplain for Jewish Life Emma Kippley-Ogman, came to the sides of the counter-protest. They facilitated religious conversations with students about their beliefs and how they were doing emotionally.

Rev. Stone brought sign-making materials from the Center for Religious and Spiritual Life for students to make signs expressing their beliefs, including some which read “love thy neighbor” and “all people are welcome here.”

Around 1:30 p.m., a Macalester student joined in with the far-right protesters. This was met with immediate backlash and, for many students, fear.

“People talked about how it was making them very uncomfortable,” Dunning said. “It’s especially more uncomfortable to know that there’s this somebody on campus who’s here — a part of this community that’s like that.”

The student was later removed from the area.

The protest went on until 2:30 p.m., and around lunchtime, Coquemont noticed a need for food and water.

“Someone told me they’d been there since 11:30,” Coquemont said. “I was like, ‘wow, these students haven’t had a chance to eat’ so I called Bon App, …  and OSLE and the Campus Center had leftover water bottles and Rice Krispie treats, so they brought those out.”

In the aftermath of the protest and its counter-protest, Macalester staff continue to worry about students and aim to support them. Religious leaders expressed concern about tension arising in the future between students with opposing viewpoints.

“We don’t want to other or ostracize members of our community,” Rev. Stone said. “Part of our work as a community is to walk alongside each other [and] … not all of our conversations are going to feel comfortable.”

Rev. Stone and Rabbi Kippley-Ogman will be holding a conversation about what life means in the Christian and Jewish tradition on Sunday, Sept. 11, with further information to be published in the Mac Daily.

Legally, the school can not take action against the protesters as they were off campus and did not physically assault anyone. However, Macalester staff aim to continue this conversation with students about how Macalester can support students in protests and counter-protests on and near campus.

“This is only going to happen more and more and more,” Rev. Stone said. “If we can’t have this discussion at Macalester, where can we have it?””