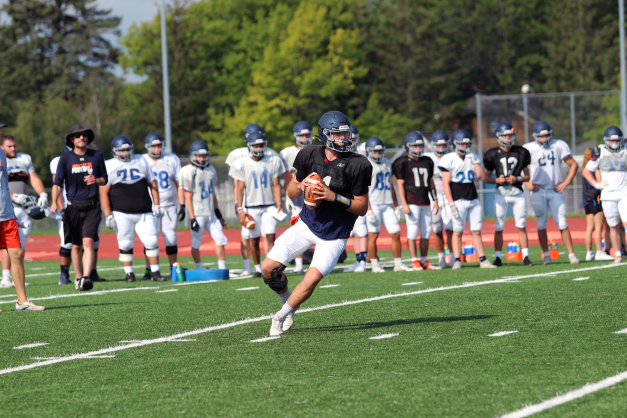 On Sept. 3, Macalester Football kicked off both the new season and a new era on Sept. 3 with a 45-24 win at University of Minnesota-Morris. Head Coach Phil Nicolaides earned his first official win at Macalester and as a collegiate head coach. Coming off an underwhelming 2021 season that saw a 3-7(2-6) record, the energy and expectations are high for the Scots this year on and off the field.

Entering the year, Nicolaides is working hard to establish a team culture built on the principles of effort, communication and dedication. He spoke to The Mac Weekly before the season on the process of creating that environment and how it can lead to winning.

“You’ve got 65 young men who are all from different backgrounds: some have been here for four years, some have been here for three weeks, and [we are] trying to build a tight knit, cohesive team, and I think that has to start in preseason camp,” Nicolaides said. “I think it always has to start with effort. I think you always want to look out on the field and watch the film and see your team playing hard. That’s something that every team talks about but we’ve actually really tried to concretely work on that each practice.”

Another key pillar of the Scots’ season is creating a positive team presence across campus. Athletics Director Donnie Brooks told The Mac Weekly about compliments he’s received regarding the football team’s conduct and attitude around Macalester, including in Cafe Mac.

“The emphasis that comes from a coach that not only wants them playing well, but also wants them doing the right things across campus, may have an impact on other teams as well,” Brooks said. “Phil is giving the entire team a clean slate, then establishing a standard and values for the team that people have to buy into. And people that buy into them will succeed.”

The ability to succeed in the Minnesota Intercollegiate Athletics Conference(MIAC), however, will not easily be reached. The conference holds a reputation for being competitive annually in the NCAA Division III Championship Bracket, with Saint John’s boasting the winningest record in DIII football history. This year’s D3football.com Preseason Top 25 poll has the Johnnies joined by Bethel as the ranked MIAC teams, placed 5th and 13th respectively, with Gustavus also receiving votes. Those three teams, as well as Augsburg, also have players voted on in the D3football.com Preseason All-America team, whereas Macalester has none. None of the Scots’ wins last year were against teams with more wins than them, so breaking into that top tier of MIAC success will be a difficult task.

Nicolaides and Brooks have faith in the personnel at Mac to rise to that challenge.

“When you look at what we have at Mac, when the previous coaches were here, the cupboards weren’t bare,” Brooks said. “We had a really good football recruiting class, one of the largest in recent history, and [Coach Nicolaides] was looking for a way to infuse and enhance culture into the program, and then figure out where the deficits were and fill those in.”

On offense, the passing game was a shining light in 2021. WR Rex Desso ’23 made waves not just in the MIAC but nationally, earning a spot in the D3football.com 2021 All-Region 6 team and an All-MIAC first-team offense selection. Macalester tallied 278.2 passing yards per game, the most in the conference. QB Michael Nadeau ’24, WR Ty Bruckner ’23 and OLB Noah Bresson ’24 also return this year after earning All-MIAC honors.

Nicolaides also conveyed the importance of building a balance between the team’s passing and rushing games.

“Last year we threw the ball a ton.” Nicolaides said. “We’ve got good players on the perimeter, we’ve got a good quarterback who can play at a really high level, but hopefully this year we’re up in the second half, and in a position where we’re trying to run the clock out and shorten the game out a little bit. I do want to bring a little bit more of a blue collar, physical presence to being able to run the football and stop the run.”

Unlocking that rushing potential is a team effort, Nicolaides explained. The Scots fell dead last by a good margin in rushing yards per game in 2021, but the goal is to push that upwards. Rather than having one running back take a majority of the workload, the team will rely on a committee of talented players to build that dimension of the offense. In addition, he credited new Offensive Line Coach Scott Glicksberg for installing a competitive edge into an already talented unit.

“I’m excited to see the steps forward we can take,” Nicolaides said. “We’ve got some good running backs here and with how good our quarterback and receivers are, teams are gonna have to make some decisions on what they want to take away. If we can be more balanced I think that’s going to help us out in the long run.”

Against UM-Morris on Sept. 3, that balance showed its potential for success in the 45-24 win. The Cougars took the scoring initiative first with an early field goal off the back of a Macalester fumble in their first drive. Soon into the second quarter, an 11-yard TD pass from Nadeau to WR Nathan Wu ’24 gave the Scots a lead that they would not give up again.

The constant effort and resilience that Nicolaides has touted in his new team were tested in the last ten minutes of the first half. UM-Morris brought the game to within one score, 14-10, with a 72 yard touchdown run, but was met with an impressive 83-yard drive capped off by a TD catch from Nick Bice ’24. The Cougars came close to another score, but the end of the half saved the Scots defense.

The third quarter was marked by tough defensive efforts, with the first five drives between both teams resulting in punts. K/P Theo Crosby ’25 nailed a field goal at the 2:32 mark to put the Scots up by 14. Macalester scored three touchdowns in the fourth quarter to put the game away, taking advantage of good field positioning after a Cougar turnover and onside kick.

Macalester’s next challenge comes from Martin Luther College at home in Macalester Stadium on Sept. 9. The Scots have not faced the Knights since 2010, and will see them coming off a 14-35 loss to Concordia-Wisconsin. The first MIAC game of the season will also be played at home, on Sept. 24 against St. Olaf, a team that the Scots were victorious over last year.

Coach Nicolaides’ ideas and hopes of a successful season doesn’t come in the form of a certain amount of wins. In his first year, he wants to build a culture and work ethic that will set this team up to win for years to come, and that will help his players grow in their personal lives. Success for him comes from attitude and effort, not the score of the game.

“I want to see a team that plays hard, and that has each other’s back… I want to be able to come in after a game on a Saturday night and throw the film on and say ‘yeah, our guys fought their tails off.’ That to me is success. I think if you do that, you set yourself up to win games.”