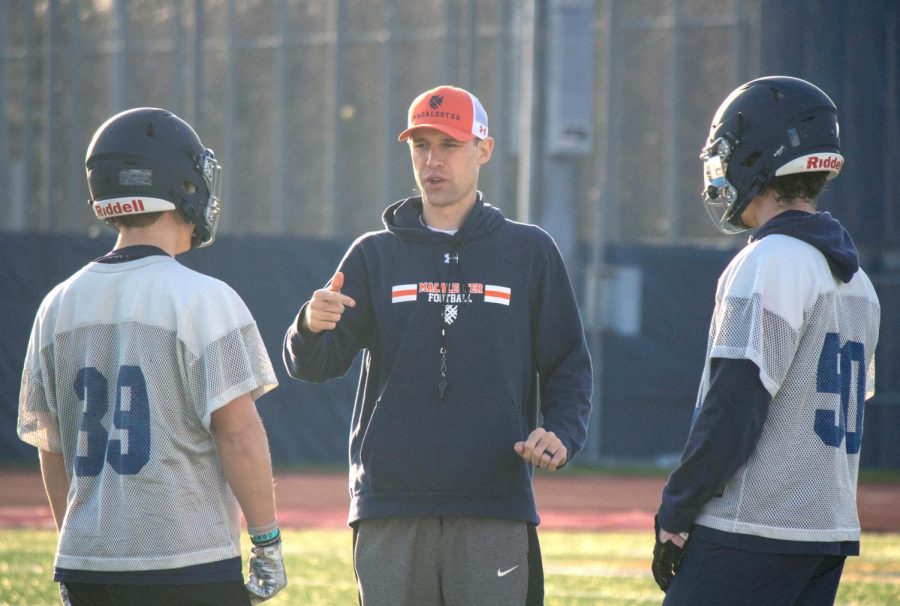 For the first time in almost a year, Macalester’s football team has a modicum of certainty. On March 18, the Macalester Athletic Department announced that Phil Nicolaides would be the next head coach of the football team. This announcement came 10 months after longtime head coach Tony Jennison left the program to become the associate director of major gifts in Macalester’s advancement office.

Over the past 10 months, the team was coached by former offensive coordinator KiJuan Ware, who led the team to a 3-7 record in the first year of their  return to the Minnesota Intercollegiate Athletic Conference (MIAC) since they left in 2001. On Wednesday, Augsburg University in Minneapolis, Minn. announced that Ware has accepted a position there for the coming year as their defensive assistant coach and recruiting coordinator.

Nicolaides comes after a six-year tenure as the defensive coordinator at Randolph-Macon College in Asheville, Va. Nicolaides has also coached at Franklin & Marshall College and Pine Creek High School in Colorado Springs, Co. Prior to his coaching career, Nicolaides was a linebacker and safety for Carnegie Mellon University from 2009-2012.

“I really knew I wanted to be a head coach at the Division III level; I knew that I wanted to coach at a high academic institution,” Nicolaides said. “I felt like I could relate best to student athletes going through a rigorous high academic experience, where they’re trying to navigate the waters of playing football, and the challenges academically that they’re facing every day.”

Nicolaides was hired just over a week before spring practices were set to start for Division III football. For both him and the team, this was a bit of a jarring experience. As a result, the team missed their first four spring practices, though according to Brady Thompson ’22, Nicolaides has worked hard to make up for lost time.

“We actually had to cancel our first few spring practices, which is obviously difficult, but we’ve done a good job trying to reschedule a couple of them in there,” Thompson said. “The NCAA is changing the rules where we’re actually allowed to wear pads in a few practices. In the previous years, it’s only been helmets and practice jerseys, so that’s going to allow us to do a little bit more than we’ve been able to do in previous years.”

The hiring process did not start until January 2022 when the college opened a nationwide search for a new head coach. They narrowed the applicant pool down to about 10 candidates based on the priorities identified by the committee. Thompson, a player representative on the hiring committee, said he was looking for someone who would both challenge the team and build genuine relationships with the players.

In mid-March all four finalists came to campus and visited with the entire team. After the visits, the committee made their recommendation to Director of Athletics Donnie Brooks. Brooks, who has the final say in hiring, announced his decision on March 18 and Nicolaides started his employment on April 1.

Despite the quick turnaround, the team is impressed with both the dedication and organization of Nicolaides.

Thompson also noted Nicolaides’ focus on a “one team” mentality. In collegiate football, players often play either defense or offense. Unlike in other sports, these two “teams” are not on the field at the same time. Sometimes this can lead to differing social circles, expectations and relationships within teams. Nicolaides, though, hopes to create a broader unity as one team.

“It’s supporting each other on the field, but also maintaining a competitive environment, which is a balance that is sometimes difficult to manage right away.” Thompson said. “It’s offense versus defense a lot of the time, but creating that ‘one team’ environment has been a big emphasis for [Nicolaides].”

The “one team” mentality is part of Nicolaides’ larger goals of creating a close knit community on the football team with core values of vulnerability, compassion and transparency.

“Compassion is probably the toughest thing you can do— to care about other people and be aware of their suffering and struggles that they’re going through,” Nicolaides said. “I think if I can build a football program where that’s at the core of it, and guys care about each other on a more intimate level, then I think the wins out there are gonna follow.”

Even with the quick turnaround this spring, Nicolaides has already taken steps to increase connection within the team and between himself and every player. Over the past month he has set up half hour meetings with every player on the team to get to know them better and understand their goals both for the football season and in life.

“I think if you really focus on building strong relationships, one on one with players and as a team, I think they’ll play a lot harder for you because they see that you have an authentic and genuine care for them,” Nicolaides said. “I think at the end of the day, that’s what guys respond to; that’s what I responded to.”

Players like Thompson are already interested in the transformational approach to coaching. Over the past two years the team has faced uncertainty from the COVID-19 pandemic to head coaching changes to moving into the MIAC. For Thompson, who will be a fifth-year senior this fall, finding a coach who’s first obligation is helping student athletes succeed both on- and off-field was of utmost importance.

“Something we were really looking for was somebody that wanted to invest in us as people,” Thompson said. “That was one of things that really drew a lot of us here. That’s why many players that are here are here — because of [former head coach Tony Jennison’s] personal commitment to developing us to become the best versions of ourselves.”

Nicolaides wants to continue this tradition at Macalester athletics — and hopes to get a few more wins in the process — though he notes his definition of success is loosely tied to the win/loss record of the team. He aims to create a culture of compassion, vulnerability and empathy; he wants to have conversations on the team about the “tough guy” stereotype football carries. His goal at Macalester is to redefine what it means to be a football player through these ideas, and for Nicolaides, Macalester is a place where staff and coaches have the opportunity to do things differently.

“I think that’s really the message that I want to give to our players is: I’m there for them when they need me,” Nicolaides said. “Everything that I’m asking them and talking about, I’m doing my best to emulate myself. One thing I talk to my guys about is I’ve intentionally tried to be very vulnerable and transparent with them, because I think that gives them permission to be vulnerable and transparent with me, and more importantly with each other.”