Mac student puts Davis Project for Peace to use 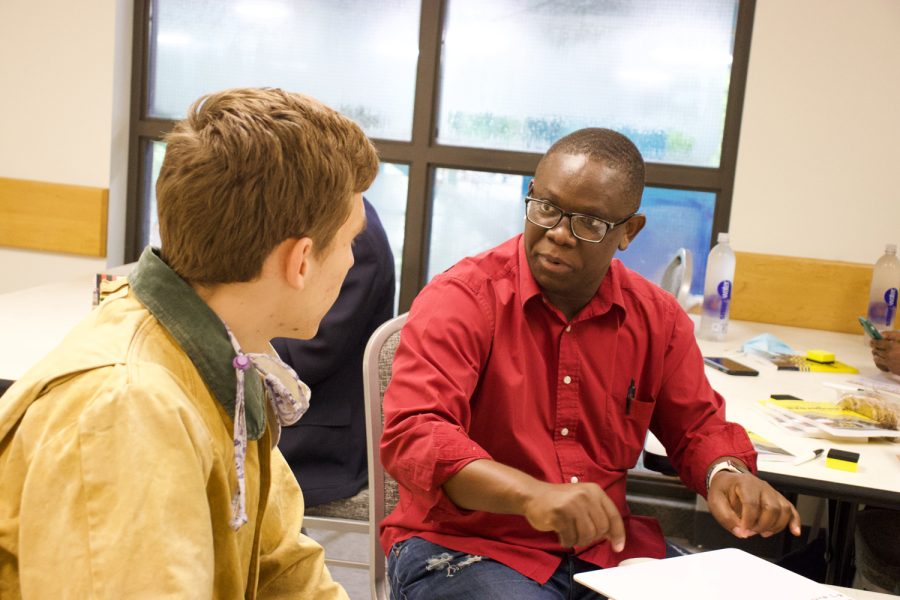 Matthew Wilkinson ’22 talks with Kiloloma Kisongo, one of the leaders of Voices in the Wilderness. Photo by Leen Diab ’22, contributing photographer.

When Matthew Wilkinson ’22 first applied for a Davis Project for Peace in the winter of 2019, he hoped to use it to spend the summer in Ghana, working on the farmer herder conflict.

The Davis Project for Peace is a national program that funds student initiatives focused on conflict resolution. Students can win up to $10,000 towards their efforts and the Civic Engagement Center (CEC) has administered the awards to a long lineage of Macalester students.

Wilkinson was inspired by the year he spent studying in Ghana as a senior in high school through a U.S. Department of State scholarship exchange program. As a student in public school there, he described his experience as a “culturally immersive program.” While in Ghana, Wilkinson learned more about the farmer herder conflict, which is part of a larger trend across West and Sub-Saharan Africa. Wilkinson said that he made friends with many members of traditionally nomadic herding groups who experienced first hand the tensions with farmers over land contentions and questioning of their nationality.

He was awarded the Davis grant by the national committee in March 2020. But that all changed with COVID-19, and he wasn’t allowed to go abroad due to the pandemic. When Wilkinson signed the paperwork, it was the first time he heard the words “social distancing.”

“You can imagine that very quickly became apparent, I could not go to that summer, do this work in the summer in Ghana,” Wilkinson said. “COVID was was a really big disruption.”

But Wilkinson soon heard from the Davis foundation that he had wide leeway to adapt the grant to the realities of COVID as needed. Dewitt Wallace Professor of Geography Bill Moseley motivated him to focus on impact, not just practicality.

Wilkinson’s first idea was to plan a radio show in Ghana that included the voices of stakeholders on all sides of the farmer herder conflict in Ghana. He also received help and backing from government officials, including Honorable Francis Oti Boateng, District Chief Executive for Asante-Akim North District in Ghana. Wilkinson intended for the show to be multilingual and distributed to different villages in Ghana.

After working to get letters from community partners and acquiring the vaccine so he would be permitted to travel, Wilkinson was ready to go. However, five days before Wilkinson would be allowed to sign the final papers to go abroad, he had to change his project or seek another year of delay because the school urged against non-essential travel.

Wilkinson sought out a new community partner, local to the Twin Cities. After connecting with aid organization Alight and Voice in the Wilderness, a non-profit serving the Congolese refugee community in the Twin Cities, he shifted his focus to work with this community. To get the program started, Wilkinson interviewed displaced peoples from the Democratic Republic of Congo living in the Twin Cities to identify various needs that weren’t being addressed by government programs or non-governmental organizations (NGOs). There he learned that many English courses offered by government programs and NGOs were not reaching Congolese refugees.

In summer 2021, after delaying his project one year due to COVID-19, Wilkinson worked with Alight to collect furniture, baby supplies, toilet paper and other necessities for members of the Twin Cities Congolese refugee community in need. Alongside Voice in the Wilderness, Wilkinson also secured Travel Assistance Program assistance from Metro Transit, which helped address some of the refugees’ transportation needs.

In a further use of the Davis Foundation fund, Wilkinson purchased reading materials in both English and Swahili, which is spoken among many people from the Eastern Congo.

In collaboration with leaders from Voice in the Wilderness, Wilkinson also created a podcast called Karibuni Minnesota, meaning “Welcome to Minnesota” in Swahili, which educated Minnesotan audiences about Congolese culture.

Wilkinson has met with Ruth Janisch, Co-Director of the Civic Engagement Center and Associate Dean of Educational Partnerships, about integrating the project with the CEC and hopes it can continue with new volunteers. Wilkinson said he is grateful for his time volunteering with Alight and Voice in the Wilderness and values the relationships he’s made.

“They’re honestly my friends, my really close friends — the leaders of [Voice in the Wilderness],” Wilkinson said. “That’s what’s keeping me going.”

Wilkinson notes the lack of institutional support and difficulties in finding transportation as barriers to students looking to get involved. As of now Wilkinson spends an hour and 45 minutes twice a week to commute to the language classes. He hopes these are things that the college will be able to help with in the future, possibly by funding an hour car or a van.

“I’m about to graduate,” Wilkinson said. “I want to hand this off to somebody because the books are bought, it’s all set up. So as long as someone keeps going, that’d be really great.”

On April 21, Wilkinson was named as a recipient of the George Stanley Arthur Prize for Civic Engagement by the CEC, awarded to graduating seniors who have shown significant service to the community.