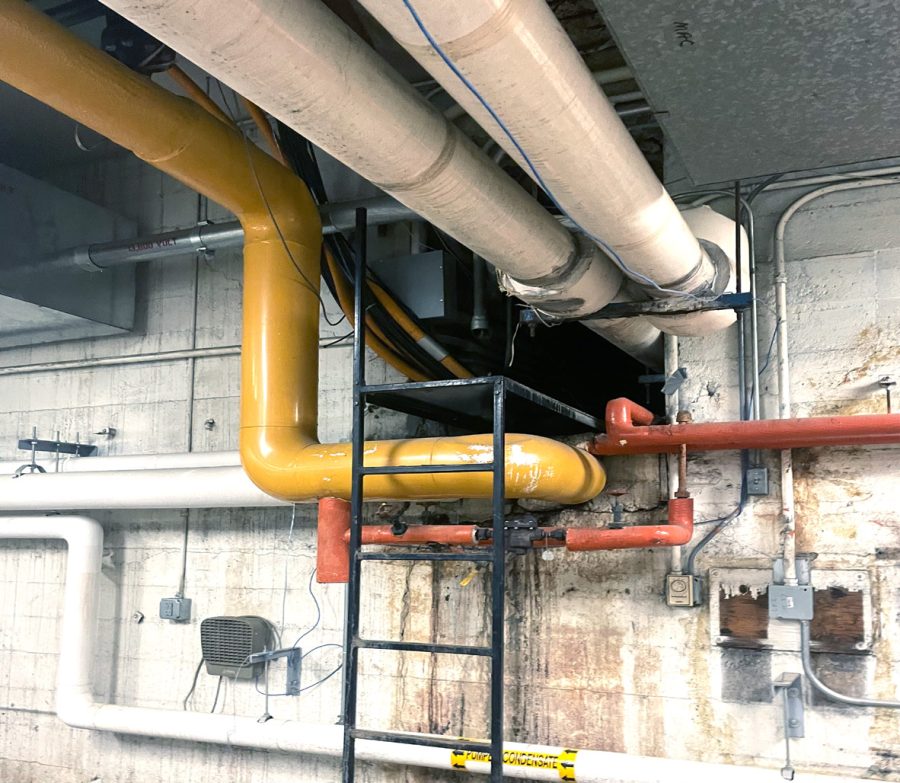 One of the maintenance tunnels under the academic buildings. Photo by Lucy Diaz '24

While it’s not always visible to students, there is a lot that goes on behind the scenes to keep the school running.

Macalester has two massive water heaters, called boilers, that create steam for heating. They are located under the theater building and the Janet Wallace Fine Arts Center. The boilers were put in when the music building was renovated, which is also when Macalester made the switch to using natural gas to produce their energy. This switch, which occurred around a decade ago, cost upwards of $10 million.

The boilers comprised 65% of the campus’ energy use in the 2020 – 2021 fiscal year. Replacement of the boilers to biofuel boilers was originally a part of Macalester’s goals to reach carbon neutrality by 2025, set in 2009. However, the boilers have an estimated 20-35 years of life remaining, and the replacement process is lengthy and grueling, causing re-evaluation of this goal in recent years.

Prior to the switch, Macalester had three boilers that use #6 oil, which were then consolidated down to two boilers burning natural gas. At any point when the boilers are running, there are operator personnel on site for safety reasons, monitoring the boilers’ activity.

As Energy Manager, Mike Pumroy is responsible for strategizing how to decrease the amount of energy that Macalester is using and how much the college spends on it.

During the winter months, Xcel energy, the company Macalester contracts their energy from, can request an energy curtailment, which requires the school to switch from natural gas to #2 fuel oil. According to Pumroy, the switch between natural gas and oil occurs each winter, when the temperature drops around February.

“There’s redundant infrastructure, there’s a lot of safety control even though we have an operator in the plant,” Pumroy said. “There’s a lot of automatic safety devices.”

For the purpose of these energy curtailments, Macalester stores its oil in an underground tank with a capacity of up to 25,000 gallons that they can pull from when they transition from steam to oil in the colder months. This winter, Macalester was curtailed for 27 days.

“Fuel oil is much more expensive … and it pollutes more, so we’d like to stay on natural gas as much as possible,” AVP of Facilities Services Nathan Lief said. “The reason we do the curtailment is because Xcel energy gives us a break on our natural gas if we’re able to diesel as needed.”

Each of the boilers is capable of taking on the full load of Macalester’s energy needs. This is to ensure that in the case that one of them should break or need to be turned off for safety reasons, the entire campus would not be without heat.

The boilers are custom built, and potential need for extra capacity is taken into account, such as if the school decides to make renovations to a building and extend the space that needs to be heated.

“When you make an investment like this you’re kind of committed for a couple of decades unless something major changes,” Pumroy said.

Across an alleyway from the boilers is the room that holds the three chiller plants. Only one or two of these plants are run at a time, and the school cycles through which ones are being used, in order to lessen the load of all of them and prolong their lifespan.

Prior to activating the coolers each year, usually around commencement, each one is dismantled and thoroughly cleaned in order to ensure they are working smoothly. The activation itself is a several-days long process, which includes filling a cooling tower on the roof of the art building, as well as all of the pipes and air handling units in the buildings. The cooling tower also undergoes a chemical treatment regime to prevent the growth of bacteria.

One of the issues that Facilities Services faces when activating and deactivating these major heating and cooling plants is the amount of time it takes. If anything in the process goes wrong, it is a scramble to fix it, and the buildings are left without either heat or air conditioning in the meantime.

“You start-up your system or you let it run too long and all of a sudden you get some cold that was unexpected and it didn’t show up in the forecast, you could be in trouble,” Lief said. “It can cause thousands and thousands of dollars of damage, so you have to pay attention and be a little bit conservative.”

According to Pumroy, the cooling plants have the capacity to add air conditioning to the dorms, or to cool additional buildings.

“We have a lot of capacity. Usually we have to operate two chillers at a time,” Pumroy said. “But we’ve got enough capacity that if Macalester decides to air condition more buildings or add more buildings, we’ve got the capacity to do that.”

Both Pumory and Lief emphasized that there is a lot of redundancy in Macalester’s infrastructure, mainly for safety purposes. Since Macalester is a residential campus, there is extra importance placed on ensuring that should anything go wrong with the heating system, heat still runs smoothly for students.

This summer, Facilities Services plans to upgrade the hood exhaust fans in Olin Rice, pilot some new technology, as well as making some upgrades to the basement of Kagin commons to form a more conducive testing environment.