“The Tempest” fills the stage with music and delight 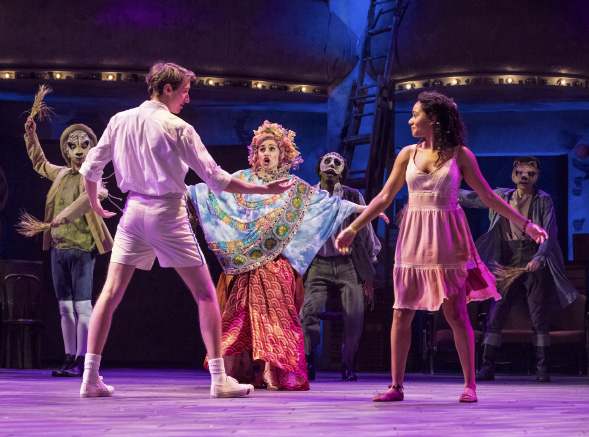 This spring, several Macalester students got the chance to see the Guthrie Theater’s production of Shakespeare’s “The Tempest,” which opened on Feb. 26 and will continue through April 16. A group of students from Professor Penelope Geng’s introductory Shakespeare class went to see the play on March 26. The following week, another group of students went to the Guthrie in an outing led by the English Honor Society.

“The Tempest” centers around Prospero, the former Duke of Milan who was overthrown by his brother, Antonio. Twelve years later, Prospero and his daughter Miranda are living on a mysterious island. His servants, Ariel and Caliban, have shown Prospero how to use the magical qualities of the island for himself. Their service is not voluntary, though: they have been enslaved by Prospero. When a ship carrying Prospero’s brother and King Alonso of Naples sails near the island, Prospero uses Ariel to send a fierce storm — the tempest from which the play gets its name — to wreck the ship. Various antics ensue, including a love story between Miranda and Ferdinand, the son of the King of Naples, and a comedic plot involving Caliban and two of Alonso’s servants. Eventually, Prospero forgives his brother, grants Ariel his freedom and is restored as the Duke of Milan. In his final speech, Prospero asks the audience to set him free with their applause. Both this last scene and the play itself are often interpreted as Shakespeare’s goodbye to the stage: “The Tempest” is thought to be one of Shakespeare’s final plays. 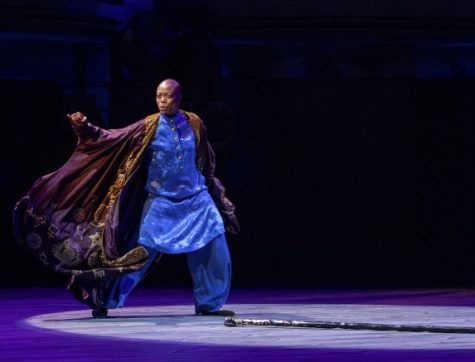 One potentially troubling aspect of the play is its treatment of Caliban, a native inhabitant of the island who is enslaved by Prospero. Caliban is mostly involved in the comedic elements of the play, and the amount of dignity he is granted is questionable. At the same time, Shakespeare makes Caliban’s plight clear, and it is difficult not to sympathize with him — and to see the situation as a representation of colonialism and enslavement. Among the funny, lighter moments, Caliban gives beautiful, moving speeches about his connection with the natural world of the island.

I talked with Professor Geng about her takeaways from this performance, which she attended along with her class. Overall, she called it a “very welcoming production,” one that comes at a time when many people are returning to the theater after a two year hiatus.

“There’s this tension right now between theater and film,” Geng said. “Why would anyone want to pay to see theater when they can experience spectacle and amazing visual effects and great storytelling by streaming a film?”

Geng thinks that “The Tempest” is a great play to get people back into the theater, and she cites this production’s stage design, lighting and combination of music and action as central to its appeal. She was particularly struck by the scene in which goddesses bless Ferdinand and Miranda’s union, culminating in an eruption of song and dance on stage.

“There were a lot of covers of popular songs,” Geng said. “I was really into the music, and I saw people around me enjoying it as well. We were all getting into it together. That’s not an experience you can have by yourself, watching a film.”

She praises the Guthrie’s reimagining of Prospero as a woman, Prospera, a choice she commends as “brilliant.” Prospera, played by Regina Marie Williams, comes across as more sympathetic than other interpretations, Geng said. In the text, Prospero is a schoolmaster as well as a magician: he instructs his daughter in a way that is often demanding and bossy.

When Williams plays Prospera, though, we are able to see the character as “an overly protective parent,” Geng said, “[and] one who has good cause to be suspicious of strangers.” Williams is a Black woman, and Geng believes this adds nuance to the role. She remarked on the “lack of protection of the Black female body…both from a historical perspective and a contemporary perspective.” Williams “carries those resonances into the role. That helps me to process why Prospera is so controlling and so protective of Miranda.”

However, Geng was confused by the Guthrie’s portrayal of Caliban, who is played by Harry Smith.

“That aspect of the story, this island being Caliban’s island, [where] he claims sovereignty through his matrilineal inheritance,” Geng said. “I thought that didn’t really work for me, when those lines were delivered by an actor who was white. I had a harder time finding a reason to root for Caliban.”

She describes the casting choice as a missed opportunity to “say something really meaningful about land loss and racial capitalism, land theft and indigeneity.” While the actor himself did a great job with the role, Geng feels that the production didn’t give her space to think through the questions of race, indigeneity and colonization. She looks forward to talking to the students in her Shakespeare class and hearing their thoughts on this casting choice.

When it comes to Shakespeare, Geng describes a balance between recognizing the importance of his stories and considering how they can be reconceived.

“Shakespeare has been dead for a long time,” she said. “I think it’s time to retire Bardolatry and the worship of Shakespeare, and to instead think about ‘what can we do with these stories?’ We can’t just ignore them, because they’re everywhere: they’ve saturated the entire cultural fabric. So, it’s thinking about what we can do as critics, as scholars, as readers, as creative writers, to make our own stories, to maybe counteract some of the racist and sexist and ableist messages in his plays, while at the same time recognizing that he was a tremendous storyteller.”

“The Tempest” is certainly one of these captivating stories, and the Guthrie’s production is sure to entertain. You can learn more about the show and get tickets through April 16 here.