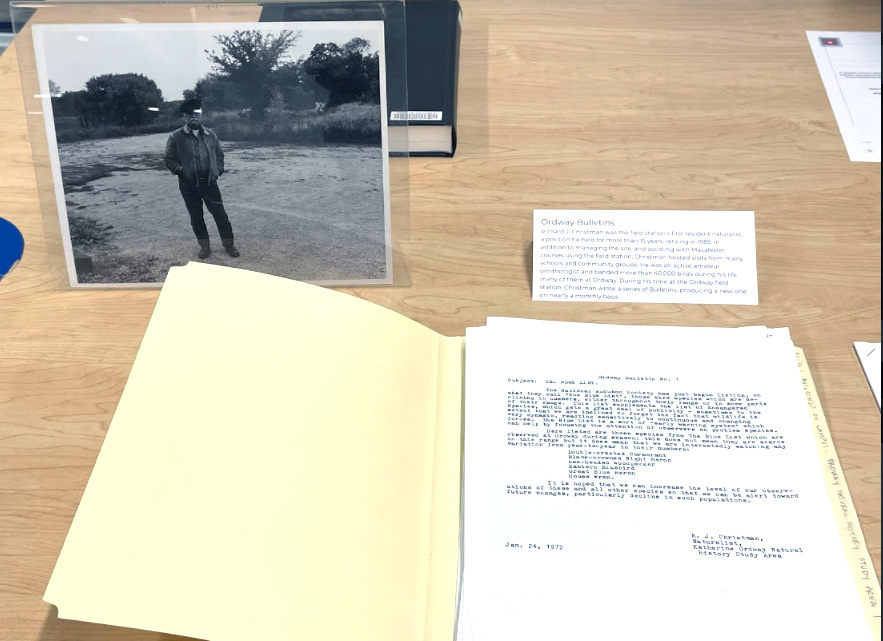 On Thursday, March 31, the Archives and Rare Books Room in the Dewitt Wallace Library hosted its second monthly open house. A large flood of people arrived at the start of the event, following a library announcement over the loudspeaker, and students trickled in over the following two hours.

Using a nature theme, the open house centered materials from student organizations like MacCARES, Mac MULCH and the Ordway, Macalester’s natural habitat study area. The librarians extended an invitation in the Mac Daily to environmental and climate based student orgs, such as MacCARES, MacMULCH, GeoClub, Outing Club and Mac Sunrise Movement to attend the event and donate materials from their recent activities and work.

According to college archivist Megan Johnson-Saylor, a majority of the information the library has about student life at Macalester in previous years comes from The Mac Weekly. They are able to make inferences about what was going on at the time from the events covered in the newspapers, but lack documents from the student organizations themselves.

“Student life that’s documented is really just The Mac Weekly,” Johnson-Saylor said. “That’s really important and is a big part of how we figure out the history of the school, but it would be nice to have other things.”

Featured in the open house were Mac Weekly articles from many years that detailed the activities of nature based student orgs as well as event flyers and other publications. Annual reports from the Ordway were also available for viewing, along with a photo spread from the late 1960’s to early 1970’s.

“Shangri-La neglected by students,” read another headline, this one from October 1983.

A related article from the same edition, titled “Naturalist gets into glaciers,” featured Richard Christman, the first Resident Naturalist for the Ordway since its acquisition by Macalester in 1967.

Other featured pieces from the archives included coverage of the annual trips sponsored by the Outing Club during spring break, over multiple years, and an event flyer for the 50th anniversary of the Arctic National Wildlife Refuge.

A large part of Johnson-Saylor’s job is collaboration with reunions. Many donations to the archives come from alumni who go through old photos and other memorabilia from their time at Macalester when they visit. Johnson-Saylor said that alumni also often visit the archives to try to look back on materials from when they attended the school, to try to better recall what the experience was like when they were a student, with yearbooks being one of the most popular collections.

Because of the interest in student life, Johnson-Saylor emphasized that she is really trying to capture the student experience when selecting which items to preserve and document.

“With student materials, I think we would save a lot more than we would from administrative materials, just because we have fewer of those student pieces, and that’s certainly something that our future students have interest in,” Johnson-Saylor said.

In addition to acquiring materials from students, staff and faculty, items in the archives and rare books room also come from external sources. According to rare books specialist Ginny Moran, when acquiring new books, she considers a number of factors, including potential multidisciplinary applications of the content and the research that faculty are doing.

“What we intend to do with all of our materials is focus on the teaching aspects,” Moran said. “When I’m buying new things, I’m looking to see how many different disciplines could engage with this object from different perspectives.”

Some of the rare books displayed in the open house included “Buffon’s Natural History Volumes 1 and 2,” printed in 1972, as well as “The Compleat Angler” by Sir Izaak Walton.

The Natural History Volumes contain a theory of earth and general history of man, and Buffon, a natural historian, was the first to reconstruct geological history in a series of stages. “The Compleat Angler” by Walton covers knowledge of natural history and ecology, and encourages recreational environmental engagement. Surprisingly, considering its publication date in 1653, The Compleat Angler advocates for methods of sustainable fishing and wildlife management that have become essential to modern-day science-based conservation.

During the open house, the librarians relax their usual rules regarding entry into the rare books room, which is maintained at a stable temperature and humidity level in order to prolong preservation of the materials there. However, students are usually required to take precautions to keep the materials in the space safe.

“In this kind of open house situation, we’re not as vigilant, but if you come in as a class, we have you wash your hands, we have you keep all of your items away from everything so that you’re using only clean hands,” Johnson-Saylor said.

One of the difficulties that the archives has been facing recently is the digitalization of a majority of student org communication. They are in the process of developing an ethical digital preservation policy, but Johnson-Saylor said it is hard to determine which accounts and hashtags to follow.

“It’s always better for the org to direct that [process] and say like, ‘Here’s a hashtag that we use a lot and you should follow.’ Or, ‘we’d really love if you’d capture our instagram,’” Johnson-Saylor said. “So having that directed and saying we would love to do this, so it’s less on us.”

For donations to the archives, donor agreements are drawn up, and donors may embargo their contributions, so that they do not become available to the public for a certain amount of time. Donor agreements can be discussed and negotiated, usually during a meeting during the acquisition process when donors meet with the librarians to discuss which pieces should be preserved.

“We try to protect people’s best interests,” Moran said. “There have been class projects that will do things specifically for the archives, and then they can be embargoed so people can’t use them for 10, 20, 50 years.”

To donate to the Macalester archives or access information from the archives for coursework, email [email protected].