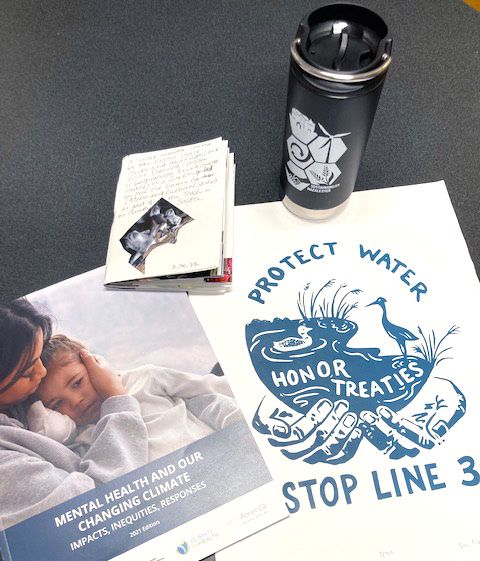 Last week, Macalester hosted a series of events for Climate Justice Week, in partnership with the Worldwide Teach-in for climate justice. These events included a Q&A with a climate activist on how to get more involved, an event on processing climate grief and anxiety and a faculty panel featuring professors from multiple departments.

The Worldwide Teach-In is an annual event that includes universities, colleges, schools K-12 and faith communities worldwide. Led by Bard College in New York, the program partners with over 1,000 different communities to help inform others about climate change and justice.

The website for the teach-in provides resources to help others learn about clean energy solutions and how each person can take action. They have detailed templates about what a teach-in event can look like for a variety of settings, and clearly outline how readers can  register to host a teach-in.

Beyond the teach-in event, Macalester extended their climate justice efforts to an entire week of events to engage the community and student body. Through a partnership between the Jan Serie Center for Scholarship and Teaching, the Sustainability Office and the College Archives, the school hosted nine events over the course of five days.

Macalester initially got involved in the teach-in when Director of the Serie Center Joan Ostrove saw a post online about how the project was seeking new partnerships with colleges and universities in October 2021. She reached out to Director of Sustainability Christie Manning and professor Roopali Phadke in the environmental studies (ES) department about making the partnership a possibility at Macalester, and the three began brainstorming ideas about possible events.

“I think it’s critical that all of us – from our many different perspectives and social locations and passions – understand and become engaged in doing something to address the many complicated and interconnected issues that are undermining our planet’s capacity to sustain life,” Ostrove wrote in an email to The Mac Weekly. “Gathering people to share knowledge, think, feel, strategize and support one another to take some kind of action is one of the things we can do really well as members of a liberal arts college environment.”

Lewis-Norelle started off by talking about how he got involved in climate activism at Macalester and the background the school has with the fossil fuel industry. He emphasized that though it is easy to feel overwhelmed or underprepared to take part in advocating for change, collective action is one of the most important aspects of making a difference, regardless of the knowledge or background you may come in with.

“It’s just about finding places to show up in areas that matter to you,” Lewis-Norelle said. “We all have to start somewhere, and one of the best ways to learn is through taking action, through learning from other people … through making mistakes and learning from those mistakes.”

Lewis-Norelle also spoke on theories of change, and how it is important to think critically about your opinions while also taking into account others perspectives. He explained that often, disagreements on what the best course of action is can cripple a movement, and that rather than being accusatory, activists should make an effort to work in parallel with others who are utilizing different strategies of change.

“It’s about finding balance but remaining open to change and remaining critical of [our] own thoughts and ideas, but also standing firm in them to a certain extent, because it’s what you believe in,” Lewis-Norelle said.

The next event was hosted by the Sustainability Office and dealt with the concepts of climate grief and anxiety. It was centered around acknowledging the fact that grappling with the concept of climate change can be overwhelming and provided some ways people can express and deal with these emotions.

The French department also hosted a screening of “Thus Spoke the Sea,” by Hatian filmmaker Arnold Antonin, which told the story of the sea surrounding Haiti and the impacts that pollution and climate change have had on it. The film asserted that, like many other places around the world, Haiti’s fate will depend on the actions taken to mitigate the effects of climate change on the surrounding waters.

One of the main attractions of the week’s events was the faculty panel, hosted by the Serie Center. The panel consisted of four professors from multiple departments, who discussed climate change and the different issues surrounding it. Each faculty member gave a brief five minute presentation before the floor was opened to questions from attendees. The discussion was moderated by Phdake.

First, educational studies professor Sonia Mehta introduced Aditi Kaur, the founder of Mountain Children’s Foundation, which is an NGO dedicated to education of climate issues within communities with a focus on educating children.

“Climate change was something really important because children are not responsible for climate change, but they will see the effects of climate change,” Kaur said in her presentation discussing her work through the Mountain Children’s Foundation with Bal Sangathan groups in India near the Himalayas. “Children are agents of change within their communities.”

Kaur was followed by a presentation from ES professor Sylvia Cifuentes about what climate justice means, particularly as it pertains to the Amazonia region.

Next, english professor James Dawes discussed why governments should add ecocide as a crime to the mandate of the International Criminal Court and how that would cause rapid change from corporations and countries alike.

“Ecocide is the unlawful or wanton acts committed with knowledge that there’s a substantial likelihood of severe and other widespread or long term damage to the environment being caused by those acts,” Dawes said. “If enacted, it’ll be a powerful tool to fight climate change.”

The final professor on the panel was ES professor Louisa Brandtmiller. She presented on current climate technology and how we can use that to mitigate the effects of climate change and also adapt to them.

“The scientific community has rightly kind of moved on from trying to prove that climate change is a thing to other other jobs,” Brandtmiller said in reference to how climate change is highly politicized within the United States.

“​​Some of those are the roles I think that science can play are identifying risks and opportunities as we sort of move forward and try to think about how we’re going to spend the next 10 years cutting our carbon emissions and how we’re going to adapt to the world,” she continued.

In the Q&A portion of the panel, Brandtmiller identified the most vulnerable populations to climate change being coastal populations, populations located close to deserts and populations that live downstream from glaciers. This is because as glaciers melt at a faster rate, the water level can rise and cause serious harm to populations along those rivers.

Among the activities was also a time capsule meant to contain items about Macalester’s hopes for the future of our world as it pertains to the environment. The call for submissions asked for a wide range of items including artwork, photos, and physical items like dirt and seeds.

The time capsule, once sealed, will be stored in the Macalester archives and opened again in 10 years as a way for the Macalester community to look back on the world in 2022 and what our hopes for the future were.

Heading the time capsule project was Ebony Adedayo, a program manager for the Serie Center. Adedayo discussed her hopes for the time capsule and what implications it has beyond Climate Justice week.

The Serie Center, according to Adedayo, also intends to deepen conversations around the realities of climate change and how it’s connected to many different injustices we see in the world around us like homophobia, racism and sexism.

Lewis-Norelle echoed this sentiment during his talk.

Adedayo also expressed how we need to take time to breathe in this situation while also working towards making space within our community to have meaningful discussions. She added that if we are all working towards the larger goal of mitigating and adapting to climate change, maybe we can make meaningful changes in the way things are.

The planning for Climate Justice Week brought together around 40 people around Macalester’s campus, including professors, library staff, alumni and students, who were all able to contribute different ideas and perspectives. The multidisciplinary approach to the events allowed for a variety of different strategies to engage the student body and overall Macalester community.

In reflection on the week’s events, Ostrove was pleased with the turnout and proceedings. She estimated that around 150 people participated in the different events that were hosted for Climate Justice Week alone. This did not include students who attended both ES and non-ES classes that chose to highlight the importance of climate justice and activism over the course of the week.

“Of course it would have been great if there were two or three times as many people at some of the events, but some events were designed for smaller groups so the turnout was just right,” Ostrove wrote. “Sometimes the most meaningful things can happen in small groups, and you just never know what kind of ripple effect any one moment or experience can have.”

Ostrove hopes for the Worldwide Teach-in to become an annual event, so that Macalester can continue to address this critical topic and participants can learn from one another. The time capsule will continue to accept submissions until April 15, which can be submitted digitally or brought to the Serie Center in suite 338 of the library.