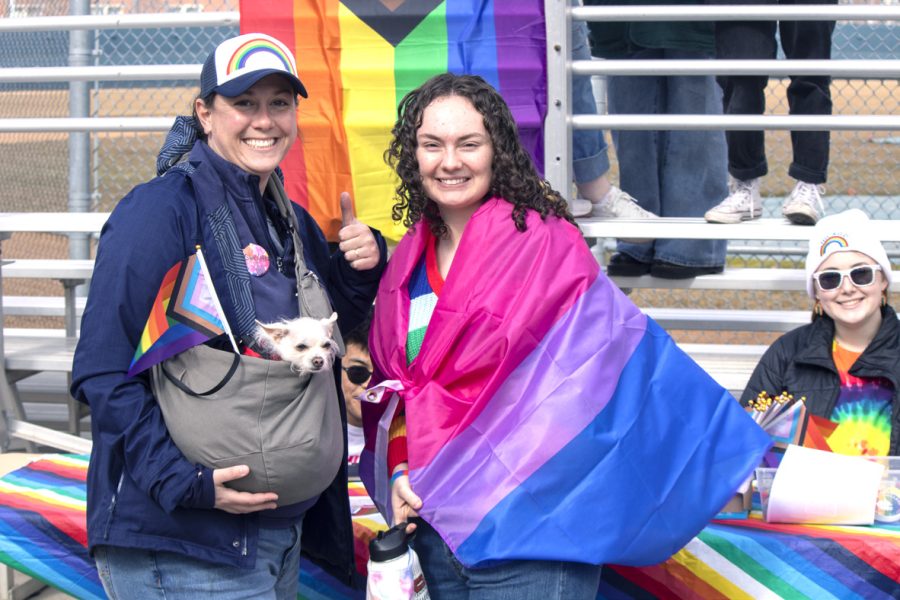 Photo of Pride Athletes at Mac booth at softball game on April 2. Photo by Matt Glover ’22.

On Saturday, April 2, a former Macalester tradition returned to Nicholson Field. The softball team, in conjunction with the newly-created Pride Athletes At Mac (PAAM), hosted a Pride Game celebration for the team’s first home games. These two games were against conference rivals Bethel University, a school that has been frequently criticized for its homophobic school culture and policies.

The Scots dropped both games in the doubleheader, but the losses did not dampen the spirit of the day.

PAAM is a new student collective aiming to create a safe community for LGBTQIA+ student varsity, club and intramural athletes. This was the first event they have helped plan, but hope to become a big part of athletic culture at Macalester.

Sophie Biesterfeld ’25 spoke to The Mac Weekly about the overall goals of PAAM.

“We really just wanted to create a space that was for queer athletes, by queer athletes.” Biesterfeld, one of the creators of the group, said. “We are pretty much focused now on doing fun activities, get togethers. … In the future, we definitely want to do some volunteering in Macalester or the greater St. Paul area for organizations that would match our mission.”
A softball pride game used to be an annual tradition at Macalester, purposely scheduled against Bethel University, an Arden Hills, Minn. school, just outside St. Paul. In the Bethel University’s Covenant for Life Together, it states, “We believe that sexual intercourse and other forms of intensely interpersonal sexual activity are reserved for monogamous, heterosexual marriage.”

A 2015 article in Bethel school publication The Clarion, “Being Gay at Bethel,” detailed the experiences that multiple openly gay students have faced, including public ostracism and the absence of student resources. In 2018, a support group was allowed to officially start for LGBTQ+ students but without the goal of outreach and education to the Bethel community.

However, this year’s game wasn’t meant to antagonize Bethel, said Mackenzie Clarke ’22, a senior on the Macalester softball team.

“We’ve never tried to make it our team against their team, attacking them at all. [We’re] showing to show what we stand for and that we’re proud,” Clarke said. “I think that it was just totally a coincidence that [our home opener] ended up being against Bethel. … It ended up being a really great coincidence.”

The Scots came into the games with a 7-13 overall record, facing an 11-2 Bethel team on a nine game win-streak. The Royals’ starting pitcher in both games, Kayla Simacek ’23, boasts the most strikeouts, most wins and best ERA in the conference. In the eight total innings she pitched, Macalester could not muster a run.

The poor results did not take away from the success of the day though. Macalester Athletics estimated the attendance of the first game at 117, which Clarke said was “the most fans that we’ve probably ever had in my four years at Macalester.”

“I’m looking back at those two games, and we showed up, we played our game. And we were able to connect with obviously the St. Paul community but also the Macalester community in a meaningful way and that’s what I think I’m really proud of and looking back on with a huge smile,” Clarke said.

Clarke hopes that the heavy support and on-field positives from the weekend will continue into the rest of the season. An April 7 doubleheader vs. Augsburg University has been canceled due to inclement weather, but four tough games against Hamline University and St. Catherine’s University await in the upcoming weekend.