The Long-Awaited Resurrection of Spring Fest 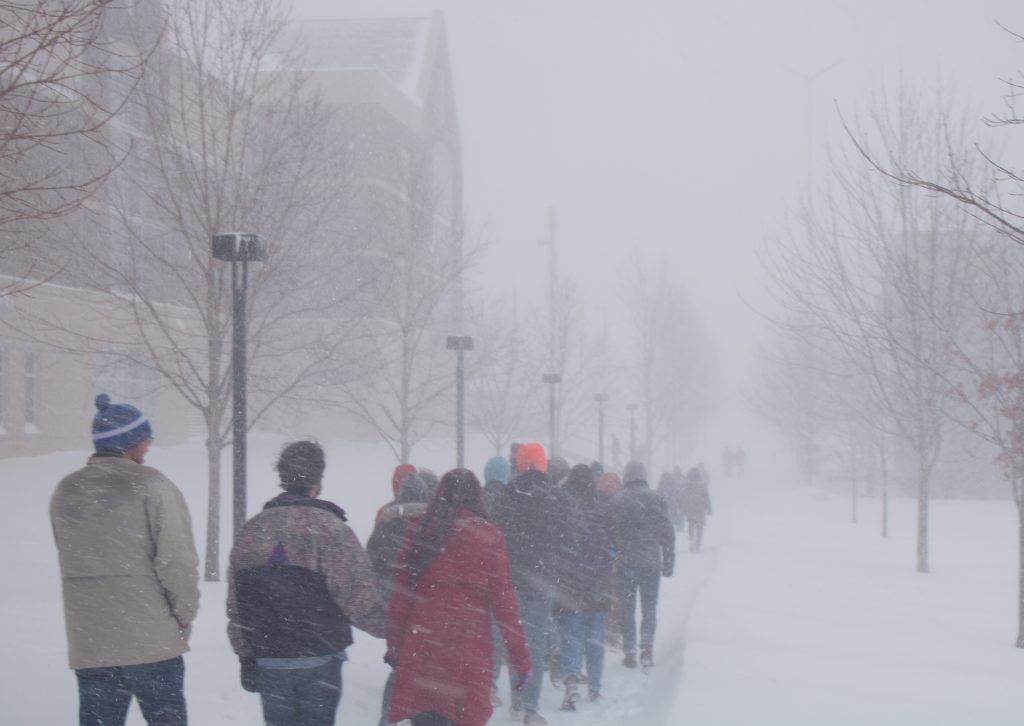 Students trek to the 2018 Springfest in white-out conditions. Photo by: Will Hamlin ’21

After an extended hiatus due to the COVID-19 pandemic, Springfest is back in person and better than ever. Multiple acts have been invited to perform on campus on Saturday, April 16 from 2-6 p.m. Put on by Program Board, Springfest will be an afternoon full of music, retro arcade games, food trucks and more.

“I think people are gonna be really excited about it,” Maxwell Davis ’25, PB Concerts and Festivals Coordinator, said. “We’ve got a really good lineup, and it’s just gonna be really great to hear people cheer … this is kinda our statement [saying that] ‘we’re back, we’ve made it through, winter is over – it’s springtime, let’s party, let’s celebrate.’”

The last in-person Springfest was in April 2019, with six bands performing on two different stages. This year will also have two stages, but they will be designated as a main stage and a student stage. Back in January, Davis reached out to WMCN to help with putting together the student stage and recommending artists for the main stage.

True to its festival-like nature, Springfest will be hosting several performers and groups, with musical genres ranging from indie rock to rap to jazz. Throughout the event, six different acts will take to the two stages, keeping the flow of music and people steady as the afternoon goes on. Headlining the event are Monaleo, Miloe and DOUBLECAMP, with student groups Bakermiller Pink, Chocolate Milk and Laurent Quartet performing between sets.

Monaleo, a singer and rapper from Houston, Texas, came into fame after her song “Beating Down Yo Block” went viral on TikTok in 2021. She has since released “Girls Outside” and “We Not Humping,” which have also become popular songs on TikTok.

Miloe, currently based in Minneapolis, was born in the Democratic Republic of the Congo and then moved to the Twin Cities at age eight. Self-described as an “Indie Project,” he has been producing “sad boi music for all your events and occasions” since 2019. Miloe is no stranger to Macalester. He performed at WMCN’s “Big Gig II: Electric Boogaloo” concert in the basement of the library in March 2019.

DOUBLECAMP is an indie-pop duo based in Nashville, Tennessee, composed of Joe Neary and Jordan Burmeister. The duo was just in St. Paul last week opening up for pop-country artist Cassadee Pope at the Turf Club. DOUBLECAMP’S popular songs include “Confetti,” “All My Friends Are Strangers” and “Smoke and Mirrors.”

In addition to a great lineup of outside bands, three Macalester student groups will be performing at Springfest. In the past, there has been one student group on the Springfest lineup. The student group had been picked as a result of Battle of the Bands, an event coordinated by WMCN. This year, WMCN staff members worked with Davis to put together a lineup entirely made up of student groups for the second stage.

“I’m really excited about [the collaboration with WMCN] because I think everyone from WMCN really knows music and really cares deeply about it,” Davis said. “They’ve also been really good advisors … just people to bounce ideas off of … I spent a lot of time with them thinking about order and how the show will flow the best. They’ve just been really great throughout the process.”

Bakermiller Pink, formerly known as Fishbowl, will be returning to Springfest after opening for Phoebe Bridgers at the virtual Springfest in 2021. Bakermiller Pink primarily dabbles in indie pop and punk rock, providing musical diversity and originality to the groups performing at Springfest.

Chocolate Milk will also be performing at Springfest. The band is relatively new to the campus music scene. The eight-person group, composed of seniors, juniors and sophomores, uses several different musical instruments (including a saxophone!), giving the indie-pop band a distinctive sound. Before their performance at the upcoming Springfest, Chocolate Milk took the stage at Loch N’ Roll, alongside Bakermiller Pink.

The Laurent Quartet will be offering another unique musical experience to Springfest. The quartet consists of four Macalester students who will be playing jazz music.

Tentatively, Springfest will be taking place on Shaw Field on April 16, with the rain location being the Leonard Center Field House.

“It will just kinda come down to what the weather gods want for us on that day,” Davis said.

Program Board will give out five-dollar food truck vouchers to the first 700 people who come and a free shirt to the first 400 people. No outside guests are allowed to attend, and students will be asked to present their IDs at the entrance. Davis said that Program Board hopes to see you there, cheering and enjoying the event as the school resurrects Springfest over Easter weekend!