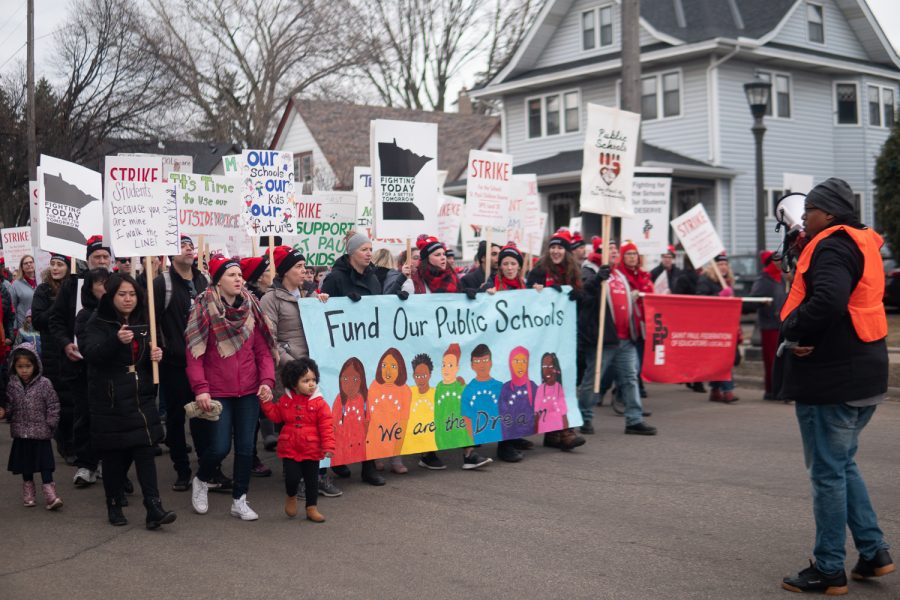 With demands for better compensation and more support for students, teachers in both St. Paul and Minneapolis are heading towards a strike. Unions in both public school districts filed their intents to strike on Feb. 23, and unless they reach agreements with the districts, they plan to begin striking on March 8.

Educators’ demands in both cities include pay raises, smaller class sizes, better staff retention  and more staff focused on student support. The St. Paul Federation of Educators (SPFE) is asking the district to stick to existing caps on class sizes and guidelines on restorative justice practices, as well as a 2.5% pay raise.

The Minneapolis Federation of Teachers (MFT) is looking for a starting salary increase for education support professionals from $24,000 to $35,000. Teachers in Minneapolis make, on average, less than teachers in St. Paul and suburban school districts — the MFT is also asking for a 20% pay increase for teachers to bring those salaries closer to their neighbors’.

Educators in both unions voted on Feb. 17 to authorize the strike. In St. Paul, 78% of educators voted in favor, with about a two-thirds turnout; In Minneapolis, about 97% of teachers and 98% of education support professionals voted yes, with greater than 90% turnout in both groups.

St. Paul’s teachers are familiar with this strike process; almost exactly two years ago, the SPFE went on strike for three days with similar demands. The strike ended as schools went remote due to the pandemic. Despite the early cutoff, the unions did get some of their demands for more social workers and multilingual staff added to contracts.

Jeff Garcia ’14 is a special education teacher and a member of St. Paul’s contract action team, which communicates with union members to hear their priorities and bring them to the rest of the union’s leadership. He was involved in organizing the last strike and this one.

“We did get some wins there… but a lot of that work was left undone and I think there was potential for more,” Garcia said. “I think that folks are wanting to make sure, at the very least, that nothing is taken away, because there’s no reason for the district to be doing that. And that we can maybe pull out a few more wins.”

The pandemic made the last two years particularly difficult for teachers and other school staff. Teachers had to pivot lessons to remote learning, and some schools lacked full-time nurses. Staff say that mental health among students is at a low and that schools don’t have adequate support to respond.

Garcia said that work with special education students in particular has been difficult. With staffing shortages, special education teachers have been serving more as co-teachers in classrooms instead of helping students advance their own learning goals.

“There have been some really good things that have come from the co-teaching model, but also it means that a lot of special education teachers are overworked and not able to actually focus on students to make progress on the goals that they have,” Garcia said.

Teachers unions are far from alone in their reckoning with working conditions and pay. Minneapolis Public Schools (MPS) food service workers with the union SEIU Local 284 also voted overwhelmingly to authorize a strike on March 2. In January, several union representatives, including members of SPFE, MFT and SEIU Local 284, published an opinion in the Minnesota Reformer declaring that “unions are ‘strike-ready.’”

“We are organizing together to correct the mistakes our employers are making by refusing to settle fair contracts that address the degradation of Minnesotans’ essential public services, pandemic concerns and the continual slide into poverty wages and diminished working conditions that have characterized the last several decades of public policy choices across our state,” the opinion reads. “That is why all our unions have considered strike actions.”

The state requires a 10-day wait between filing an intent to strike and actually striking, so both MFT and SPFE are in talks with their districts this week to try to reach an agreement before March 8.

“I have directed my team to continue bargaining in good faith and strongly urge SPFE and SPPS leadership to do whatever it takes to avoid a strike, especially now after almost two years of disrupted learning,” Gothard wrote.

Gothard added in a later statement that the district is looking into options to support students and families in the event of a strike, like childcare, meals and transportation.

Minneapolis Public Schools (MPS) Superintendent Ed Graff released a similar statement, stating his intention to work as hard as possible to settle the contract disputes before the strike date.

“I have directed the MPS staff involved in contract negotiations to meet 24/7, if necessary, to reach agreements,” Graff said. “That means day, night and weekends.”

While all players state that no one wants a strike, representatives of SPPS and MPS have noted financial constraints as limitations to answering all of the unions’ demands.

“MPS and MFT share many of the same priorities…” Graff said in his statement. “It is my responsibility, however, and the responsibility of our Board of Education, to ensure that MPS is financially solvent when today’s kindergarteners graduate, and for years to come after that.”

Garcia says the teachers are sticking to their demands.

“I think that the pandemic has shown just how much folks are reliant — and the system is reliant — on teachers’ paid and unpaid labor, and that goes for our education support staff too, doubly, because so much of what they do is close-in, difficult work that results in secondary trauma, and they are being paid barely enough to live.”