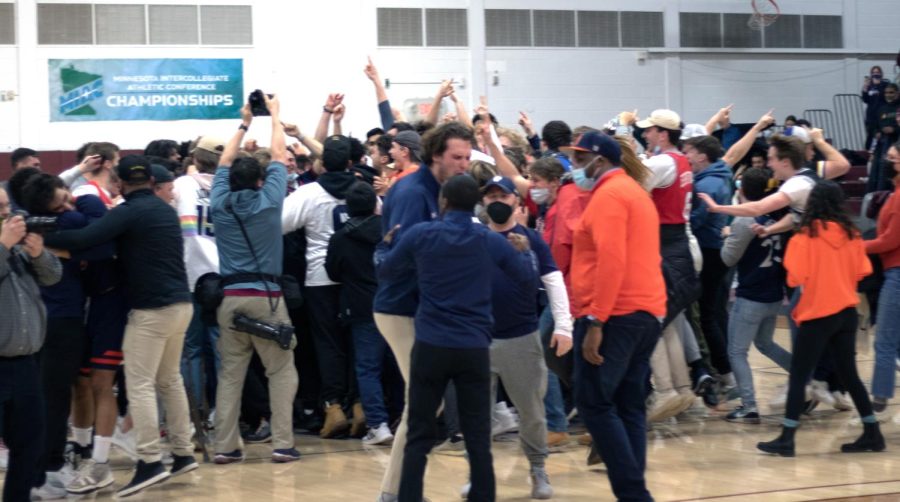 After an underdog run at the Minnesota Intercollegiate Athletic Conference (MIAC) Championship, the sixth-seeded Macalester Men’s Basketball team lost to St. John’s University on Feb. 27, 71-75. Even though they led at halftime and well into the second half, the Scots could not overcome the Johnnies’ rally and tough defense in the end. Yet, the journey to Macalester’s first MIAC final since 2004, and second ever, shed a light on the efforts of the men’s basketball players, coaching staff, athletic department support staff and alumni, as well as the student community’s excitement for and investment in the success of Macalester Athletics.

“After the season I got so many texts from alumni, from old players who I played with, who I didn’t play with, from friends around campus,” captain and starting center Shane Anderson ’22 said. “I think having the fans here is amazing, and it just makes everything more fun for us. It makes it less about just playing a basketball game to more like, okay, this is an event, people are cheering for us.”

On Friday, Feb. 25, the Scots traveled to second-seeded Augsburg University for a tumultuous and rowdy semifinal against the Auggies. Macalester pushed through a first half deficit to come back with a 76-74 win — and earn a bid to the MIAC final.

They capitalized with 26 points off the bench, including 10 in the second half from Lucas Leiter ’22. Fueled by a loud Macalester crowd of at least 150 students, the Scots scored 43 points in the second half, and came away with an impressive win. This was even more exciting because when they faced Augsburg in early January, the Scots lost 92-55.

“To go to Augsburg, where they were the two seed, and the first time that we played them this year, we lost by 37 — worst loss of the year,” head coach Abe Woldeslassie ’08 said. “Then to beat them by two at their place. I joked with a friend, I said, ‘if this were a Disney movie, we would have won the championship.’ That’s what happens in movies. The underdog wins the championship.”

Their exciting semifinal win set the Scots up for a high-energy battle in the MIAC final against St. John’s, the top seed in the MIAC. Almost 80 students and countless faculty and staff made the hour and a half journey to Collegeville, Minn. on Macalester fan buses to cheer for the team. There was not only a full student section making noise for the Scots, but an impressive amount of other supporters throughout the stands. 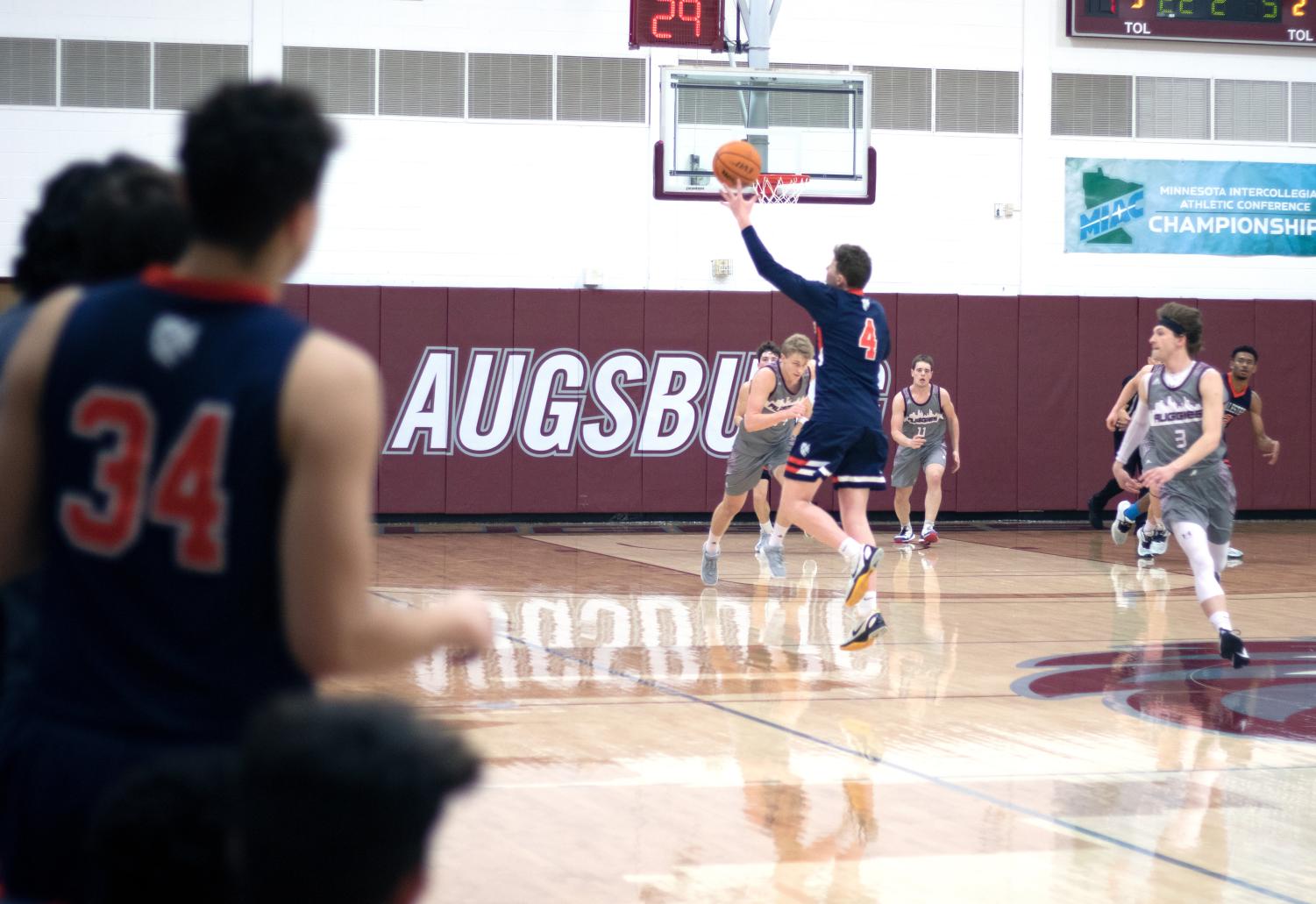 The players did not disappoint, and led the Johnnies at the half, 38-37 after holding a decent lead throughout the first. But, they could not keep their edge through the second half, falling behind with 11 minutes left in the game and never recovering. The defense stayed consistent, allowing only one more point in the latter half, but the offense slowed down just enough to let St. John’s slide by. The final score was 71-75.

The overall team performance was impressive despite the loss. Three pointers have been key to the Scots’ game all year — they took the second-most in the MIAC and made them at the third-best rate — and the performance behind the arc on Sunday was their best since the blowout win against St. Scholastica. Five blocks as a team were their most in the playoffs, each one firing up the crowd to a deafening level. The first half of the game was as impressive as the Scots have looked all year, shooting 62% from the field, another best on the playoff run. St. John’s has been tough to beat all season, with only two conference losses and consistent votes in the DIII Top-25 poll.

Caleb Williams ’24 and Gabriel Ramos ’22 scored 18 and 17 points respectively in the game, leading all scorers. Ramos, a fifth-year senior, stepped up in each playoff game earning double-doubles against both the College of St. Scholastica and Carleton College. He also scored over 10 points in each playoff game. Ramos earned MIAC player of the week accolades earlier this year, after he scored a career-high 28 points, including seven threes, against St. Mary’s College on Jan. 22.

Not only was Ramos filling the stat sheets, but he was consistently a vocal leader on the floor. When teammates hung their heads over turnovers, missed free throws or other mistakes late in the game, he was always visibly encouraging them to keep fighting.

“If you were to look up work ethic, passion, in the Macalester basketball dictionary, you’d open it up and you’d see Gaby’s face,” Woldeslassie said. “He just embodies what it means to compete. And when your fifth year senior, one of your oldest players, a two-time captain is doing that, then the younger players tend to follow.”

In addition to Ramos, Leiter, Anderson and Eric Sathy ’22 formed a core group of senior leadership on the team. Woldeslassie credits the seniors with setting a tone of hard work, competition and continuous improvement — particularly during their tough start to the season. Heading into the December break, Macalester sat at 4-9 with little hope of making the playoffs. That all changed in January.

Macalester lost their first three games of 2022, falling to 4-11. But then they started winning. The Scots won five straight games to end January before falling to Carleton on Feb. 2, in a 67-60 nailbiter. They also topped Augsburg in their senior night game.

“I remember we were at my house, and I want to say it was like New Year’s Eve,” Anderson said. “We were all sitting and talking, and I remember Caleb Williams saying like, ‘I want to prove to these other guys that we belong.’ And so I think that was the big thing … everyone was like ‘guys, we got to start winning.’”

And win they did. Williams credited one of Woldeslassie’s mantras — fight to win every possession — with inspiring the team to fight for every single game and every point. He added too, like Anderson, that the team wanted to win.

Over the past four years the men’s basketball team — and much of the athletics department — has undergone a transformation. Macalester sports teams are winning more, greater numbers of fans are attending games and some teams are beginning to imagine bids in their sports’ National Collegiate Athletic Association (NCAA) tournaments.

Both Anderson and Woldeslassie noted the huge shifts in the program they have seen over the last four years. In the 2018-19 season, Anderson’s first year and Woldeslassie’s first season as coach, Macalester went 7-18. Prior to COVID-19, in 2019-20, they went 8-17, and in a shortened 2020-21 season they went 2-2, all against St. Olaf College. This year was a watershed moment where all the hard work over the past two years came together.

“Our hope this year was to make the playoffs and win some games in the process, which we did,” Woldeslassie said. “You know, we were so close. For men’s basketball, we’ve never made the NCAA tournament. The next step in that is, can we win a championship and get to the first NCAA tournament in school history?”

Anderson agreed. He credited the environment Woldeslassie, assistant coach Conner Nord and assistant coach Bridge Tusler created over the past four years with the team’s success this season.

Director of Athletics Donnie Brooks has also been pushing to change the Macalester athletics culture. In the first coverage of Brooks’s tenure from The Mac Weekly, he said that Macalester athletics needed more swagger, more “drip” and needed to feel good about itself. He added this week that the basketball team has discovered the “drip.”

“We’ve been envisioning what it could look like for Macalester athletics to embody the excellence that we say and does exist all over campus,” Brooks said. “The unique thing, I think, about the basketball team, is that I’ve never seen a more united Macalester around one thing. The fact that when we looked into the crowd you didn’t see just other teams, you saw students that you don’t normally see at athletic events … was really special.”

In addition to the campus-wide support, Brooks added that the basketball team’s diversity, commitment to community service and investment in academic excellence demonstrates that Macalester is creating a winning athletic program in a unique way.

“[The basketball program] is the evidence that what we dreamed about can happen at Macalester,” Brooks added.

He calls the changes in the teams a “youth movement,” with many underclassmen shining under the mentorship and leadership of junior and senior student athletes. The basketball team fits that model perfectly. Two of their top scorers, Williams and Coby Gold ’25, just finished their first full seasons on the team. Another starter, Tom Andreae ’24, adds to the youth of the team.

“This year was great, because we had a lot of seniors who were great leaders, and that’s what we’ll be missing next year,” Williams said. “I think we’ll have a lot of talent and a lot of really good young players, but it’ll just be a matter of seeing who can step up and lead the team as a captain, or regardless. But I think the goal and the expectation is to win a lot.”

Ultimately, building on their outstanding run is what the men’s basketball team hopes to do this year. They want to make their name known nationally. They want the NCAA tournament bid and they want the MIAC championship. Even though the season ended on Sunday, the men continued to put in the work. Woldeslassie pointed out that Badou Ba ’25 and Jack Hernandez ’25 were back practicing in the gym on Tuesday with Nord, putting in the behind-the-scenes work for the Scots.

“I hope that they can remember what it felt like in that locker room after we lost the final and work so hard so that never happens to them again,” Anderson said. “So they get over that hump and win the MIAC.

“I think we have laid the foundation of seniors, and now it’s their turn to take it to that next level and make Mac become like a nationwide team in DIII. And I think they definitely can.”