Sanchez ’24 explores beauty and confidence in people of color in “Shades, Lovingly” 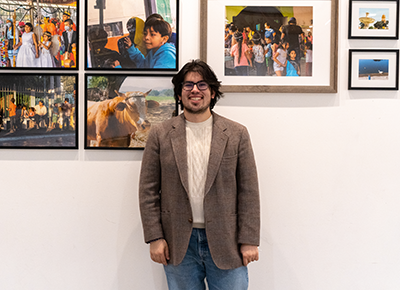 Over J-Term, Tyler Sanchez ’24 created a photography gallery called “Shades, Lovingly” that features around 35 photos with mini-interviews and reflections hung in between. Sanchez resists the societal definition of beauty as whiteness; instead, his project showcases the beauty in rural Mexico and in people of color.

Sanchez has been taking photos since May 2020 when he started as a way to make money during quarantine. Despite never having touched a real camera before purchasing his own, he fell in love with photography. This semester was the first time he’s taken a photography class; before then, he learned through YouTube.

When coming up with the idea for “Shades, Lovingly,” Sanchez reflected on the concept of beauty and feeling beautiful. After he left a more diverse high school in the suburbs of Chicago and came to Macalester, his friend group during his first year was entirely white. Soon, almost all his friends were in relationships. When people talked about who they had crushes on, or who they thought was attractive in TV shows and movies, it was never a person of color: it was someone who was white, skinny and blond. He began to notice there was a white beauty standard at Macalester.

“I didn’t know of a single relationship that had a person of color in it, [not] a single one,” Sanchez said. “I knew they existed, but in the bubble that I was in, it felt a little suffocating.”

When he was having a bad day, he responded by buying things; he’d take himself out to dinner or hit the thrift stores. However, Sanchez knew this wasn’t a sustainable way to cope with feeling insecure or down.

“What does self care and that beautification feel like? How do you love yourself without having to spend the money to get there?” Sanchez asked.

He was able to explore this idea by interviewing his uncle and cousins and taking pictures in his dad’s hometown through the help of the Live it Fund, a program in the department of entrepreneurship and innovation. The Live it Fund grants $500-$2,000 to students with innovative projects, and the accepted students take J-Term to make their idea into reality.

In “Shades, Lovingly,” Sanchez breaks out of the white beauty standard and materialism surrounding it through reconnecting to his culture. His dad grew up in Ahuehuetzingo, Puebla, a lower-income town in rural Mexico, where there is a culture of money-consciousness.

“I think that almost everyone is going to say to save face that beauty is from the inside, and I will say the same thing, too, but I think I’m working on believing it, like for myself,” Sanchez said. “A beautiful person… just has so much love for people. That is a beautiful person in my head.”

He encompasses the abstract idea of beauty inside a two-dimensional image by allowing the Mexican landscape and words of his family members speak, mostly, for themselves. The goal of the “Longing” section of the gallery, he said, is to do just that — to end the misconception that a lot of people, including himself, have about Mexico.

“When I saw cobblestone streets and large cathedrals, I was like, this isn’t Mexico, this is Europe,” Sanchez said.

He cited the TV series “Breaking Bad” as an example of how Mexico is portrayed in the media as being only dry desert and sand and, most of all, incredibly yellow. This warping of Mexico’s image has made him forget that there are blue skies and green trees everywhere, despite having visited twice before.

In capturing Mexico in this way, Sanchez was inspired by street photography. He tried his best to be a passive observer at public gatherings. He stuck to the walls but it wasn’t easy because he wanted people to look at the camera without noticing him.

In the end, there are two types of photos in the gallery that feature people: candids of everyday life and head-on portraits with the subject staring straight ahead. Sanchez took most of these portraits after each interview; the only portrait he took at a different time was the photo of his cousin holding a beer and standing by a truck.

Indeed, when Sanchez got to Mexico, he experienced a totally different way of life.

“I had the five, six different pairs of clothes I had, and I was happy just sitting outside, eating a churro and reading my book,” he said.

In living in his uncle’s house, he took a step back from the materialist and capitalist American culture. One of the major differences at his family’s house, for example, was the lack of mirrors. There is a corner in his gallery that features a small shard of a mirror, no bigger than a hand, and this was the largest mirror he saw on his visit. Coming from the three school-provided mirrors in his Wallace dorm room alone, this was a shock for Sanchez.

“When I [saw] myself through my phone camera, I had an anxiety reaction,” Sanchez said. “I was like, ‘oh my god, I went five days without seeing myself.’ And I encourage anyone to try that.”

When he returned to the states, the process of setting up the gallery was chaotic. Of the 1,000 photos he’d taken, he’d edited 100 and chosen 50. From there, though, he said it was difficult to narrow it down when he had so many favorites.

After the two and a half  hours it took to put everything together, the gallery opened on Feb. 4 at 6:00 p.m. People whom he’d never met before professed how much his project meant to them; their reactions brought him to tears.

To learn more about “Shades, Lovingly” and see Sanchez’s photos and interviews in person, go to the Reissner Lounge on the second floor of Janet Wallace.