The Mac Weekly looks ahead to winter sports playoffs 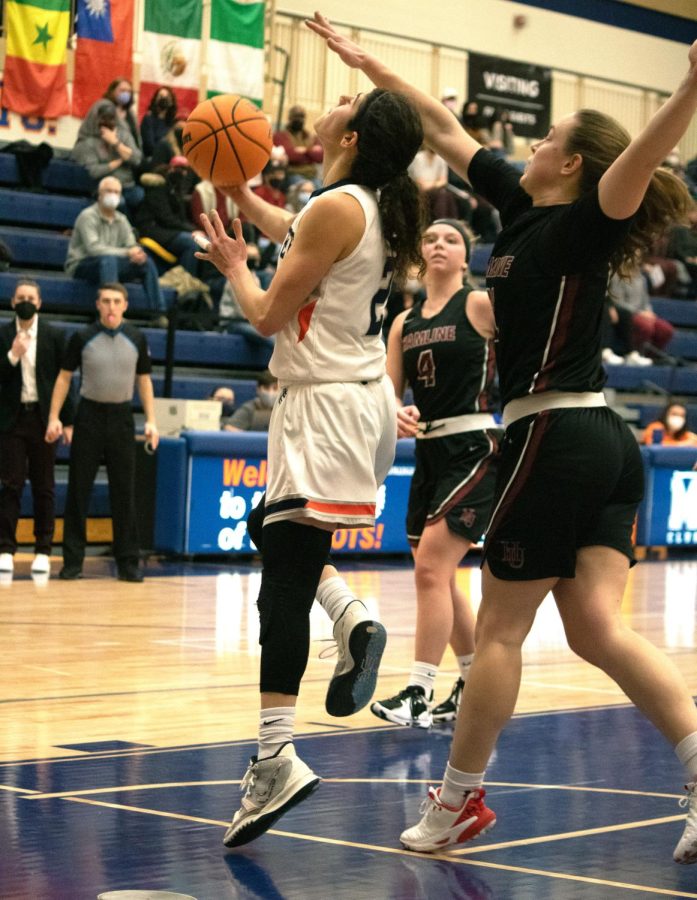 This winter sports season has seen records broken, historic win streaks, and heart-breaking losses—and the playoffs have yet to happen. Over the next three weeks, every winter sports team will start their Minnesota Intercollegiate Athletic Conference (MIAC) title hunt. Some teams will need a miracle to make the title game, others may come close to individual titles, and all teams will plan to show off their most athletic, fastest and strongest feats yet.

Following a thrilling away win over Hamline, Macalester Men’s Basketball looks forward to hosting the College of St. Scholastica on Saturday, Feb. 19 at 3pm. Finishing 12-12 overall and 9-10 in conference play, the Scots secured the 6th seed in the MIAC. The Saints ended the season with a 5-20 record, placing last in the standings. This will be the first home playoff game for Macalester since 2004, when they defeated Concordia College (Minn.).

In the two games this year, Macalester came from behind in the second half to secure wins against St. Scholastica. On Dec. 8, Caleb Williams ’24 propelled the Scots to victory with 18 points and eight rebounds. Jack Hernandez ’25 added on an impressive 13 points in just 17 minutes played. In the home rematch , 19 points apiece from Coby Gold ’25 and Gabriel Ramos ’22 powered a 72-63 victory over the Saints. Rebounding was the key to the game, with the Scots tallying 12 more than the Saints. Ramos also led the game with five assists and nine boards.

Macalester will be hoping that these positive results will continue into the playoffs. These will be the last games for seniors Ramos, Shane Anderson ’22, Lucas Leiter ’22 and Eric Sathy ’22, and there is no better sendoff gift than a deep run through the playoffs. Entrance for Saturday’s game is free with Macalester ID. Should the Scots advance, they would play No. 3 Carleton in the quarterfinals on Tuesday, Feb. 22. The results of those game(s) will be printed in next week’s edition of The Mac Weekly.

Despite a rough second half of the season, Macalester Women’s Basketball will have hope heading into a first round matchup against rival Carleton. The team finished 8-17 overall and 6-16 in the MIAC, good for the 11th seed and a matchup against No. 6 Carleton. The Scots have not beaten the Knights this year, but both final scores were within single digits. This will be the first playoff game for Macalester Women’s Basketball since 2011, when they were knocked out in the first round by the College of Saint Benedict.

The two losses to Carleton were not without encouraging elements. The Scots’ most common starting five was not intact for either game, with Andrea Palmen ’24 out on Jan. 5 and Emma LaFrenz ’23 out on Feb. 2. The first game was lost both by the amount of fast break points given up by the Scots and bench scoring from the Knights. A fully healthy team should be able to help remedy these issues. Katherine Norquist ’25  headlined the team’s scoring in the first game with 16 points. In the reverse matchup, Norquist did well to make up for the absence of LaFrenz’s MIAC-leading rebounds, but 19 turnovers by the Scots was an insurmountable total.

The hope going into the playoffs will come from a finally fully healthy squad as well as positive momentum from the end of the regular season. Despite losing their final nine games, Macalester put in positive performances against Ausgburg and Hamline in their last two. Both games featured leads for the Scots in the second half, including in the final two minutes against the Pipers. Holding their own against two MIAC powerhouses signals the ability to compete with anyone in the conference. If the Scots make it to the quarterfinals, they would play Hamline for the second time in a week after almost beating them on Feb. 16. The key will be turning second half losses into commanding victories.

Both swim and dive teams are hoping to improve their MIAC finishes and build their programs to MIAC prominence in the near future, head coach Kyllian Griffin told The Mac Weekly earlier this year. The last MIAC conference meet, in 2019, saw the Macalester men finish seventh out of eight teams, sending just two athletes to the finals. This year, Macalester has a chance to change that.

With a slew of talented first years and stalwart seniors, Macalester will look to send more athletes to the MIAC finals, and their hunt began on Feb. 16. Charles Batsaikhan ’25 is one of the top Macalester swimmers. Throughout the season, he tallied seven individual victories and currently holds the MIAC’s second and third fastest times in the 200-yard and 100-yard breaststroke, respectively.

Batsaikhan also makes up Macalester’s top men’s relay team. He often teams with Benjamin Blomquist ’22, Isaac Kisker ’25 and Aiden Williams ’22 in the 200-meter medley relay. Their quartet has made the podium at several meets this season, and is currently ranked fifth in the MIAC. Batsaikhan, Blomquist and Kisker often swim the 200-meter freestyle relay as well, along with Adam Schroeder ’25. They have posted several impressive times this season, including a win at the Roger Ahlman Invitational in December and rank fourth in the MIAC.

On his own, Blomquist is also a swimmer to watch during the conference meet. He ranks tenth and fifth, respectively, in the 100- and 200-yard butterfly (or “fly”), and as a senior he will be looking to make a splash at his final series of meets.

Though they have some notable individual standouts, the overarching goal of Macalester’s Swim and Dive team is to climb up the podium and improve on their 2019 ranking. Since much of the meet will happen after The Mac Weekly goes to print on Wednesday night, we will recap the conference outcomes in next week’s paper.

The women’s swim and dive team had a breakout season this year and broke multiple school records in the process. Earlier this season, Griffin said he thought the women’s team had great chances of improvement at the MIAC meet. In 2019, the women came in seventh out of eleven teams. They will look to break into the top half of the MIAC this year.

Wray-Raabolle, Jocelyn Radke ’24, Natalie Pollock ’25 and Grace Madigan ’23 also broke the school record in the 400-yard medley relay and hold the third-best time in the MIAC. Another relay team with Radke, Madigan, Caroline Chapon ’25 and Olga Merkadeau ’25, broke the Macalester record in the 400-yard freestyle this year. That team has the second-best time in the MIAC. The women will look to push both their relay squads into the finals.

Radke will also be looking to head to the finals this year. She is ranked sixth in the 50- and 100-yard freestyle. Throughout the season she has led Macalester’s freestylers in shorter distances.

In the longer swims, Eleanor Parker ’25 is a swimmer to watch for the Scots. She currently holds the fourth-best time in the 1650-yard freestyle and is seventh in the 1000-yard.

For the women’s team, any outcome will help them create an even stronger team next winter. Their roster is stacked with young talent, and the team has next three years to control the MIAC.

Macalester’s Track and Field teams will open their postseason competition on Feb. 24 at Carleton College for the MIAC Championships. Both men’s and women’s teams will look to send Scots to the podium in a variety of running, jumping, and possibly throwing events.

On the men’s side, Arlo Heiter ’25 will look to make a mark in the 200- and 400-meter dashes. He currently holds fifth and sixth place in each throughout the MIAC. Heiter, along with Jeff Wang ’25 and Ryan Kinnucan ’22 took the top three places in the 400-meter at the Meet of the Hearts on Feb. 12, showing that the Scots’ sprinters are peaking at the right time.

For the women, Maria Blaesing ’24 will be a top contender in the 1000-meter and mile runs. She is currently ranked fourth in the mile and sixth in the 1000, and if she runs well during the championship she will earn all-MIAC honors. Regardless of her results this coming weekend, it will be exciting to see her next two years on the track.

On the field, Hannah Grosse ’22, the Macalester record-holder in pole vault and top-ranked MIAC vaulter will go for the gold in her final indoor season at Macalester. In 2020, Grosse was third in the MIAC, but her vaulting has improved by over a foot since then. At jumps, Journey Amundson ’23, who ranks third in the triple jump and eighth in the long jump, will be on the hunt for a top-three finish. She has dominated the jumping scene at Macalester this season — and since her first year when she finished third in the triple jump at the indoor championships.

The Mac Weekly will continue to follow all teams throughout their championship runs and provide weekly updates on their results.