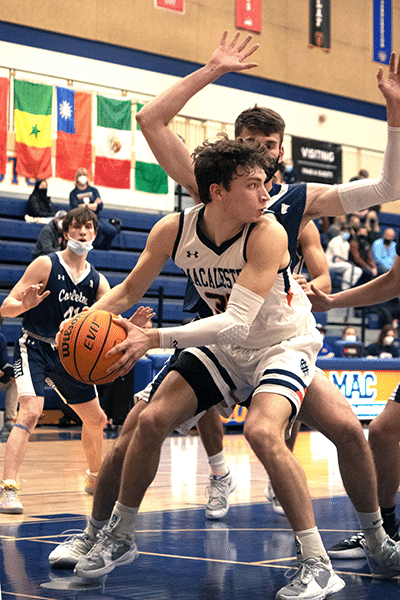 Success in the MIAC doesn’t come easy, and Macalester’s Men’s Basketball team knows that better than anyone. The team has missed the playoffs for 15 straight seasons and came into this year with only five players with a full season or more of college experience under their belts. Despite the odds and expectations stacked against them, the Scots have managed to put themselves in a prime position to make a deep run in the playoffs this year. An impressive five-game win streak in January led into the Feb. 2 rivalry match against Carleton at home, in which the team hoped to ride their momentum to a victory, but came up short 67-60.

After the first few games of conference play this season, it became clear that the competition in the Minnesota Intercollegiate Athletic Conference (MIAC) would be as tough as ever. The Scots dropped four of the five conference games they played before the winter break, the sole win coming against last-place St. Scholastica. The Nov. 23 game against Concordia College (Minn.) was cancelled due to multiple COVID-19 cases on the Mac team, marking an issue that the team faced for the majority of the season so far. Eighteen games in, only two players have managed to feature in each one.

Head Coach Abe Woldeslassie echoed these issues to The Mac Weekly, attributing his expectations for the team to whether they could stay healthy.

“I knew we were talented and it was just a matter of, could we stay healthy, which unfortunately didn’t happen early in the year,” Woldeslassie said.

Results have dramatically turned around in January. Prior to the Carleton match, the team put together five straight victories. The shining moment of this streak was an away win against Saint Mary’s University on Jan. 22, one of only two teams in the MIAC to receive votes in D3hoops.com’s Preseason Top 25 Poll. Gabriel Ramos ’22 recorded a career-high 28 points, along with six rebounds and two steals. All of the wins have been close, each decided by less than 10 points, and in four the Scots trailed in the last three minutes. Their wins against St. Olaf and Gustavus Adolphus also showed the Scots’ progression over the season, as they had lost by double-digit totals in their first meetings.

A big change as of recent has been diversity of scoring. Caleb Williams ’24 has averaged 17.4 points per game over the year, but contributions from other players have been the key to sustained success. Since the winter break, double-digit point games have come from Ramos, Shane Anderson ’22, Coby Gold ’25, Eric Sathy ’22, Tom Andreae ’23, Lucas Leiter ’22 and Badou Ba ’25.

In the buildup to Carleton, positivity radiated off the court in practice. Communication was constant, both from the coaches giving pointers and shouts of joy from the players at every made basket. Woldeslassie’s key to on-court success is simple: keep doing what’s working.

“Continuing to establish a post presence has been really important to us,” Woldeslassie said. “Our defense has been really, really good the past few games, so just more of the same of what we’ve been doing.”

He attributed much of the success in practice to Defensive Coordinator Connor Nord and Assistant Coach Bridge Tusler, who helps run the offense.

Commenting on the importance of Wednesday’s game, Woldeslassie said, “It’ll be our first game back with fans … it’s a huge opportunity to beat truly a rival, to beat someone who beat us the first time, but also to keep rising in the standings in the MIAC”.

The hard work wasn’t limited to just the court. To begin the Jan. 31 practice, only two days before the game, the team welcomed Macalester College Student Government President Shreya Nagdev ’22. They discussed the upcoming elections, including how and why to run for seats in the governing body of Macalester’s student body. They also discussed the possible school accommodations for student-athletes who feel overburdened.

Taking valuable time out of practice to inform a majority-young team of these things is a testament to the dedication to help the players succeed in every aspect of their life. The impact is clear, as seniors Sathy, Leiter, Ramos and Anderson could be seen in Feb. 1’s Mac Daily at campus’s Little Free Pantry.

On Feb. 2, the Alumni Gym welcomed 224 fans for the fiery rivalry match with Carleton. Ultimately, the Scots couldn’t get enough shots to fall to overcome the Knights, even with an electric crowd who cheered every play that went in the Scots’ favor. The team shot only 32% from the field en route to a 67-60 loss. Holding a lead at half and into the last three minutes of the game, an 8-2 run by Carleton to close out the game doomed Macalester. Most of those eight points came off foul shots as the Scots grew desperate to regain their lead.

Williams had a solid game, scoring 18 points, and Ramos put up a double-double. Eight rebounds and two blocks came from Ba. The Scots tallied an impressive 19 points off the bench but couldn’t ride it to a victory. The win streak is no more, but the team will hope that the inspiration it sparked will not die out.

After the MIAC’s Feb. 2 slate of games, Macalester still sits fifth in the standings despite the loss. If that placing holds, it would be the team’s best finish since 2005.

This is exactly where Woldeslassie wanted to be.

The conference announced that this year’s playoff bracket would be open to all teams, removing the stress of qualification. However, the remaining five games are still crucial to win, as a finish of sixth or higher in the standings would guarantee home court in the first round.

The playoffs begin on Feb. 19 with the Scots hopefully at home in St. Paul.