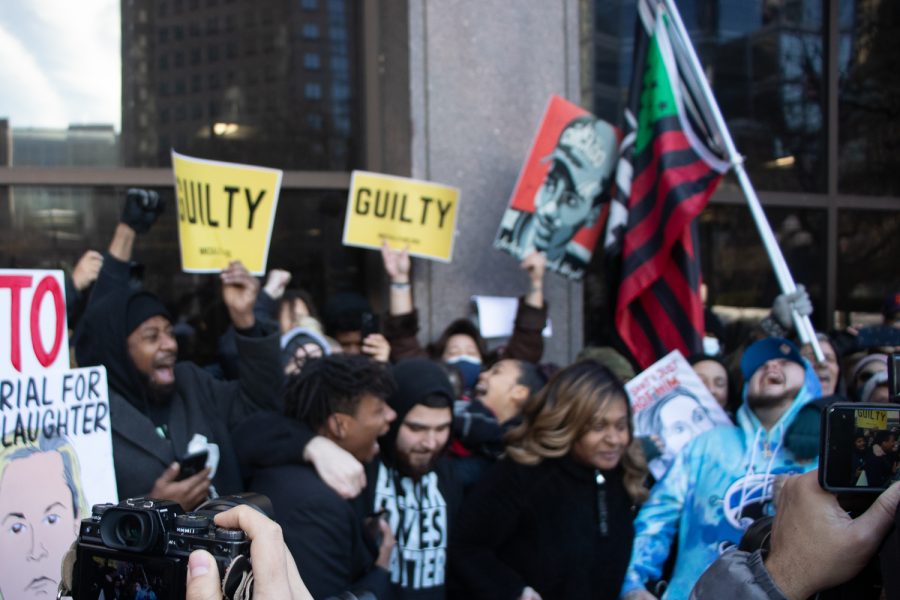 On April 11, 2021, Daunte Wright, a 20-year-old Black man, was fatally shot by Potter in Brooklyn Center, Minnesota. The trial for Potter began on Tuesday, November 30th, taking place at the Hennepin County Courthouse. Potter was found guilty on both counts of first and second-degree manslaughter.

Marcia Howard, a protester that has occupied George Floyd Square on 38th Street and Chicago Avenue for 19 months, said this is merely accountability, not justice.

“I feel relieved, and yet at the same time, I bridle at this ritual of us waiting to see whether or not a Black boy’s life is worth more or less than a white woman’s future,” Howard said. “I’m happy for the family, but this is just basic accountability for a woman that admitted that she did wrong. It’s not justice. Daunte would still be here if this was at all just.”

Deliberation began on Monday and lasted about 27 hours over four days. On Tuesday afternoon, jurors were struggling to reach a consensus on the verdict. Many of the protesters waiting outside the Government Center seemed to expect an announcement of the verdict on the first or second day of deliberation. The deliberation in the trial of Derek Chauvin, a former Minneapolis police officer who killed George Floyd, took about 10 hours.

Johnathon McClellan, president of the Minnesota Justice Coalition, shared a statement to the crowd after the verdict was announced.

“Kim Potter’s actions were relentless, negligent, and her actions caused the death of Daunte Wright,” McClellan said. “I want to thank the jury for holding Kim Potter accountable for her actions and sending a message that you will be held accountable for your actions, and that the badge will not protect you.”

Later that day, Brooklyn Center held a press conference at the city hall. Mayor Mike Elliott shared that the fight for change must continue.

“Today’s guilty verdict… is an important moment for accountability, but no verdict can deliver true justice to Daunte Wright, his family, and his loved ones,” Elliott said. “To deliver that life-affirming justice, we must not be content with accountability after this tragedy. We must all fully commit ourselves to creating a city where everyone can thrive, where everyone is safe from police violence.”

On the second day of deliberation, Tanya James from Little Rock, Arkansas, shared her view on the significance of the trial.

“I think that this will help set an example for other cops with hidden agendas, racism embedded in them… because there’s too many cases like this that they have gotten away with,” James said. “So we have to put an end to it now. With Kim Potter, especially having 26 years of experience. We’ve got to make an example out of her.”

According to the New York Times, there has been at least 15 cases in which officers mistook guns for tasers.

Courteney Ross, George Floyd’s fiancé and a former teacher of Wright, said he was a fun and joyful student.

“Daunte was the type of kid that everybody’s waiting for to come in class. In a fun way, he was like a little class clown that made everybody laugh,” Ross said. “If you knew Floyd and you knew Daunte, both their spirits are up there being silly as heck right now. They’re both so jovial and fun, and if they were here they’d be throwing snowballs.”

McClellan said the fight against racial injustice and police violence must continue.

“We must continue to carry this fight into the legislature, and into politics. We must fight for change. Like the Berlin wall in 1989, we must tear down this wall of oppression, hate, racism [and] systemic injustice.”