Winter book recommendations for every kind of reader 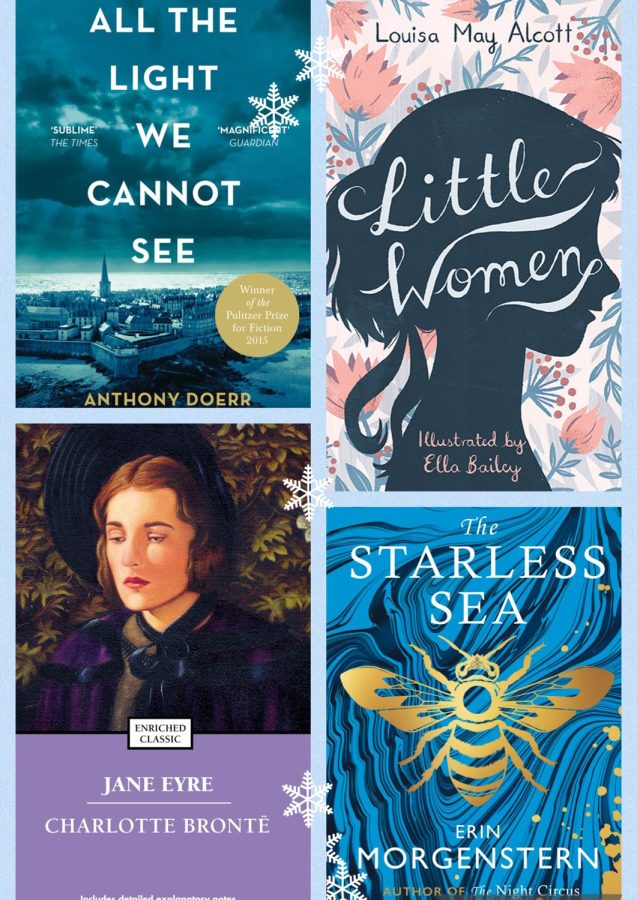 With these grey months of winter now upon us, it’s the perfect time to get lost in a great book. We present to you some of our favorite novels that are told against a cold and wintry background. None of them relate to a specific holiday, but they have cozy and snowy throughlines that makes them appropriate for even the gloomiest day in December and January. From classic to fantasy to historical, we’ve picked out a story for (mostly) every reader.

Jane, orphaned as a child, is used to living in the background, noticed only when her cousins need a scapegoat or her aunt needs someone to punish. Anything, she suspects, would be better than this childhood. But when her aunt sends her to Lowood, a boarding school where the students are perpetually cold and hungry, and where the headmaster is more cruel than her aunt’s worst moods, Jane wonders if she is simply unlucky. Whether luck — or the lack of it — is involved is yet to be seen as Jane, now 18, is hired by Edward Rochester to become the tutor and caretaker of his ward. Jane travels to their home — a darkly mysterious and mostly empty mansion known as Thornfield — not expecting to find Mr. Rochester so hard to stay away from, and certainly not expecting him to return the sentiment. So begins the twisty-and-turny story of their relationship, one with an ever-changing power dynamic, and one where secrets pile on top of each other. “Jane Eyre” is a groundbreaking coming-of-age story with the fiery protagonist of Jane at its center. I’ve always thought this novel is the sort of classic that could be turned into a CW TV series in the style of “The Vampire Diaries.” It’s passionate, dramatic and impossible to put down. Plus, most of the story takes place during the cold English winters, so it’s perfect for these upcoming months.

“All the Light We Cannot See” — Anthony Doer

“All the Light We Cannot See” is a Pulitzer Prize winning historical fiction book following two children’s lives throughout World War II. Marie-Laure is a young girl living with her father in France, who went blind at the age of six, giving her a unique perspective not found in many World War II historical fiction books. Her father works for a museum and is put in charge of hiding a valuable diamond as the Nazi’s occupy their town. They flee to Paris in an attempt to stay out of Nazi suspision. Meanwhile, an orphan boy in Germany with a talent for technology, Warner, is lured into Nazi practices by the possibility of finding a better life. The book goes back and forth between the two perspectives as readers anxiously await the meeting of the two. By including the perspective of both characters, readers are able to view the story’s plot through two different, yet connected, perspectives. Both characters provide the innocent perspectives of children who are each shaped by the events of war. Many of the scenes take place in the winter, and include chilling aspects found in many books set during the Nazi occupation. For readers looking for a book that creates strong setting and character development, while getting a glimpse into European culture during World War II, “All the Light We Cannot See” would be a good fit.

Erin Morgenstern is the New York Times bestselling author of “The Night Circus,” and she does not disappoint in her elusively magical and cozy second novel. “The Starless Sea” follows Zachary Ezra Rollins, a graduate student who stumbles across a book that will change his life. Among stories of pirates and lovers, acolytes and keys, one part of the book, somehow, tells a moment from his life. As Zachary searches for an answer to this strange occurrence, a series of clues lead him to a masquerade ball in New York City and then through a doorway into an underground, magical library. He is, unfortunately, even more confused than before because this library is more than it seems. Among the bookshelves and sleeping cats there are doors that lead to a different time, and deep within its darkness, there are the shores of the starless sea and the ruins of lost cities. When Zachary discovers that there are some who seek to destroy this realm, he joins two of the library’s inhabitants — Mirabel, it’s pink-haired protector and Dorian, the handsome love interest with unclear alliances — in an effort to save the many secrets of this underground world. Morgenstern takes metaphors and makes them literal in her entrancing, somewhat unsettling tale set in the dead of winter and alternating between Zachary’s narration and portions of the novel he finds. Above all, it is a novel that celebrates the power of stories.

“Little Women” was originally written as a children’s novel, but it is far from childish. In reality it is a book on social commentary and activism. With Alcott herself being a feminist and an abolitionist, her characters defy 19th century expectations of women by creating well developed and strong female protagonists. The aspects of childhood in this story come out as nostalgic, perfect for the holidays when we are reminiscing about warm memories with family. The story follows the four March sisters as they grow up in a world with endless expectations and limited opportunities for women. It is based during the Civil War, and with their father in the war, the sisters and their mother must support each other. The girls have their own distinct personalities, from the independent and tomboyish Jo, to the sweet and romantic Amy. One of the most distinct relationships is that of the girls and their neighbor Laurie. Jo and Laurie quickly become good friends, both with spirited and adventurous personalities. They go on countless adventures as children and learn the value of friendship as they get older. It reminds you to treasure your youth, and not rush through it. With cozy winter scenes of Christmas mornings and dances, this book is a perfect feel-good story for the winter.