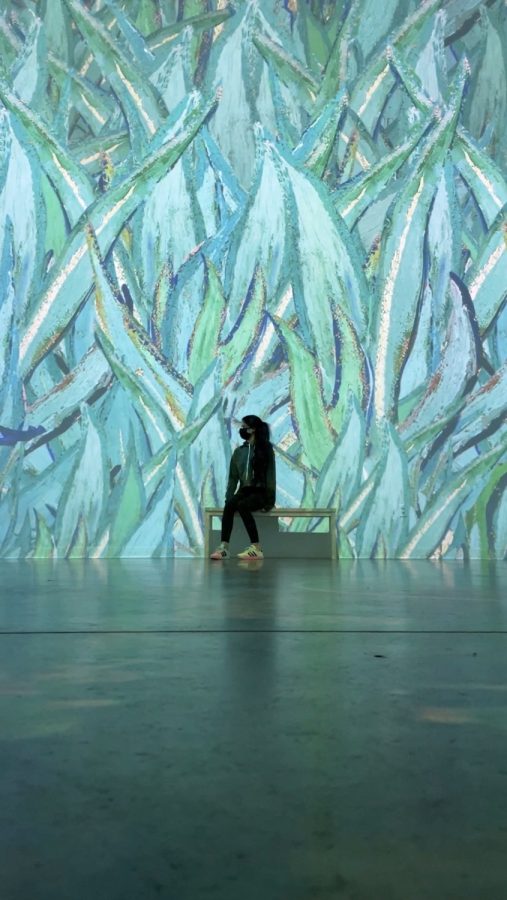 In Minneapolis’s Lighthouse Immersive building lies the opportunity to take a yoga class, complimented by Vincent Van Gogh’s works projected onto the walls and reflected off of mirrors in the room, animated by music. Massimiliano Siccardi designed the Immersive Van Gogh Exhibit, and Luca Longobardi composed the soundtrack, which premiered in Paris 2008. It is a sight to behold, and quite the pairing: yoga and lots of Van Gogh.

At 8:00 a.m. on a Sunday morning, the yoga class only had nine students, but the teacher, from the company Lifeway Kefir, said that it is often much busier. After the teacher greeted us and asked our yoga experience levels, the exhibits program began playing at half volume. The show began with bees swarming the walls and sound effects of buzzing to go with it.

Van Gogh’s most famous works moved all around the room, animated so that a painted candle would flicker, or the sky of a work would appear before the foreground. Some art pieces included “The Potato Eaters” (1885), “Sunflowers” (1888), “The Bedroom” (1889) and “Starry Night” (1889). The show touts staggering statistics of 500,000 cubic feet of projections, over 60,000 frames of video and 90 million pixels.

The class lasted around 35 minutes, and while the yoga was beginner-level, the intensity of the imagery and soundtrack was palpable. The instruction and body-movement distracted from the exhibit’s animation and soundtrack. However, the show played for a second time, at full volume, after the class.

During the show’s second playing, patrons were invited to walk around the large room, sit or even lie down to experience Van Gogh’s works in motion. The show was created for a digital age, recreating 1800s works in an experiential fashion. As such a creation for the present day, there were no shortage of photo-ops and Instagrammable moments. Even so, it was extremely easy and accessible to be entirely in the moment, literally immersed in masterpieces.

Visitors can see — and experience — Immersive Van Gogh Minneapolis with or without the yoga class, for $44 at off-peak times, instead of the yoga’s $55 (minus taxes and fees). I found that it was so easy to be in the present moment during the yoga experience, so I loved that choice. However, it would not be necessary if you care more about the art than the immersion (or if you dislike yoga).

The exhibit plays in 20 cities in the US and Canada. The exhibit is open until the end of Feb, 2022, and tickets can be purchased online at https://vangoghmsp.com/.