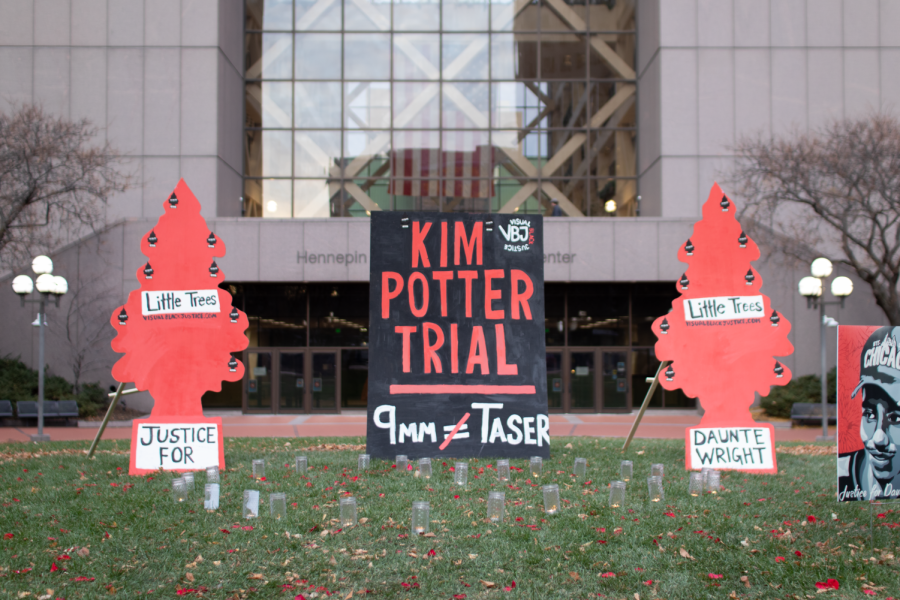 On Wednesday, Dec. 8, arguments began in the trial of Kim Potter, the former Brooklyn Center police officer who is charged with first and second degree manslaughter in the death of Daunte Wright.

Potter shot Wright, a 20-year-old Black man, last spring during a traffic stop as he attempted to drive away. Potter is heard on her body camera footage of the incident warning Wright that she will use her Taser on him; instead, she drew her gun and shot Wright, killing him.

The defense will argue that Potter’s actions were a mistake, not a crime.

Jury selection was finalized on Friday Dec. 10, seating 12 jurors and three alternates. The jury is majority white, only including three non-white jurors, one Black woman and two Asian women.

Compared to the Derek Chauvin trial, this jury is significantly less diverse. The Chauvin jury was split 50-50 between white and non-white jurors. Experts say juries diverse in race and gender tend to show less bias.

Potential jurors who voiced stronger opinions either in favor of or against police and the Black Lives Matter movement were generally not seated on the jury; most jurors seated gave more neutral answers when questioned on their opinions, or said that they could set their opinions aside when considering this case.

The prosecution opened the trial with its opening statement, delivered by Minnesota Assistant Attorney General Erin Eldridge. The statement highlighted the state’s argument that Potter, a well-trained 26-year veteran of the Brooklyn Center Police Department, should have known the difference between her Taser and her gun.

With her mistake, the state argues, Potter was recklessly endangering Wright and should have foreseen death or serious injury.

The state also questioned Potter’s intent to use a Taser in the first place. Eldridge noted that officers are instructed not to use Tasers on suspects fleeing arrest or suspects who are behind the wheel of a car — Wright had gotten back into his car, turned it on and was attempting to drive away when Potter pulled her weapon.

Eldridge stressed that these actions put others in danger, too. Two other officers were just feet away when Potter fired her gun. After shooting Wright, his car lost control and traveled down the street, colliding with another vehicle driving in the opposite direction.

The defense’s opening statement, presented by attorney Paul Engh, focused on the argument that Potter made a mistake when she fired her gun instead of the Taser. Engh also rebutted the prosecution’s claim that Potter shouldn’t have even drawn her Taser, claiming that her use of force was appropriate.

Engh claims force was justified because Potter was protecting her fellow officers. Another officer, Sgt. Mychal Johnson, was leaning in the passenger’s side window of the vehicle; the defense attorney claimed that Potter worried Johnson would be killed if Wright drove away.

The defense also attempted to humanize the officers, claiming that Potter’s actions were an honest mistake, and blamed Wright for not fully cooperating with the arrest.

“All he had to do was surrender,” Engh said.

In addition to the opening statements on Wednesday, jurors watched body camera footage from multiple officers, including footage from Potter’s squad car which had never been seen before.

Testimony from witnesses started Wednesday, too. Katie Bryant, Wright’s mother, testified about seeing her son in the car after he had been shot. Brooklyn Center Police Officer Anthony Luckey, who was on the scene of the shooting as Potter’s trainee, also testified for the prosecution.

Testimony will continue through the next weeks — Judge Regina Chu has said that she anticipates the trial wrapping up around Dec. 25, with a few days of a recess over Christmas if it continues past then.