In the Works: Andrea ’24 on empathy-based leadership 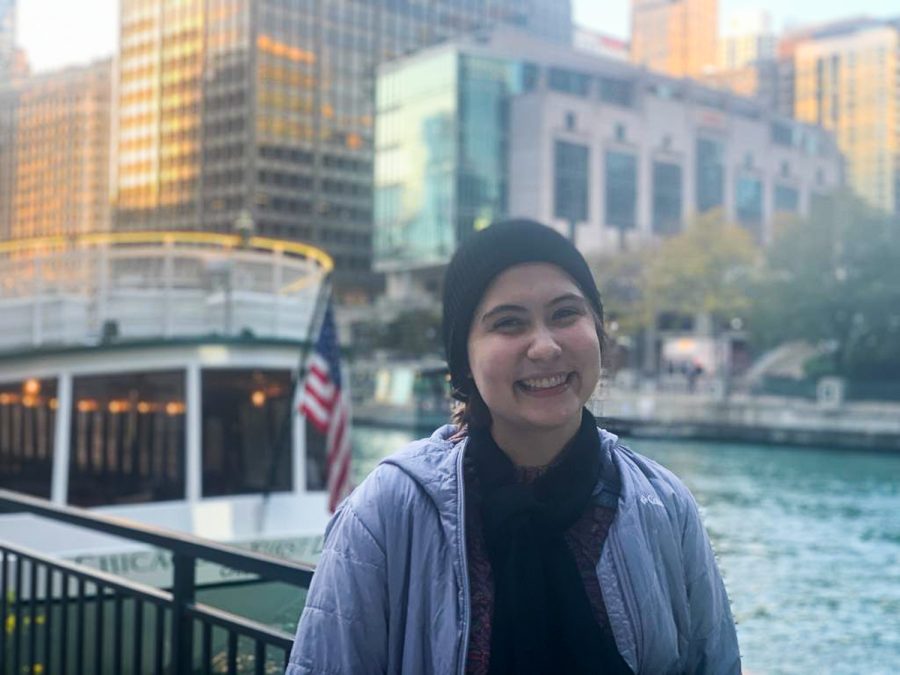 Andrea ’24 is pursuing a double major in psychology and anthropology with a concentration on global and community health. She works at Esperanza United, an NGO focused on gender-based violence prevention in Latinx communities and volunteers at CLUES, an organization that aims to provide culturally and linguistically relevant services for Latinx communities in Minnesota. The following is part of an interview The Mac Weekly conducted with Andrea. The transcript has been slightly edited and revised for clarity. Her last name has been retracted to ensure her safety in light of the political crisis in her home country.

The Mac Weekly (TMW): What is the key focus of your work?

Andrea: I have been volunteering for a long time, even before the crisis started in Nicaragua. Nicaragua has always been a very unequal country in a very unequal region. When the 2018 crisis started, I joined with my family in protest. I never had any leadership role within the protests, but I participated as much as I could before I left to go to the United World College (UWC) in Costa Rica. There, I started doing some volunteer work in a community that’s mainly formed by Nicaraguan immigrants. It is not a new community. I was working with children there, with homework, and English and things like that. Of course, it was not directly related to the crisis, but in a way, because of the crisis, a lot more Nicaraguans were coming to Costa Rica.

Now that I’m here in the U.S., I am physically a lot further away but also in terms of the number of people and the connection, a lot farther away. In my off-campus employment, I’m also working with Latinx youth, not related to Nicaragua at all. In one of them, we’re teaching digital literacy. The other one is the prevention of gender-based violence with Latinx youth. Working with populations from my region makes me feel connected. That’s what I do. And it’s not a lot, but it is what it is.

TMW: Have you found any major trends in your field/work?

Andrea: This is my second time working in three different places with immigrant populations. A huge trend I’ve seen is feeling separated from the rest. People are often being forced to prove the stereotypes wrong. I feel there’s a burden of just surviving in a different culture, in a different place but then there’s also the burden of “I have to prove them wrong for what they believe about me in the first place.” That’s something I’ve seen in the three places.

I’ve also seen how important identity is — once you’re outside of home or once you’re outside of your main culture — and how much solidarity matters. Costa Ricans and Nicaraguans, we have a similar culture. We’re right next to each other. Yet, the immigrant experience, especially of poor immigrants, is so different from the general Costa Rican population. The whole community is built around solidarity and is welcoming and is holding on to traditions. I feel that’s also true with the people that I volunteer at CLUES with. They had to form their own homes once they left their countries, especially Mexico. In Esperanza United, it’s a little different because the youth I work with, the majority of them are second-generation. So they were already born in the U.S., but their parents are immigrants. I think for them, it’s more about balancing those two identities they hold. At the same time, they are trying to find that space with other Latinx youth who were also born here. As a Latina myself, I can relate to a lot of that. But because of other identities I have, being a white Latina, or coming with a scholarship to the U.S., I have a very different experience than the people I work with have. So I can relate in some ways, but I am also in a very privileged position.

TMW: What is the most interesting discovery/realization that you’ve had so far about your work?

Andrea: I don’t know if it’s the most interesting I’ve had, but one that has been in my head lately a lot. It is about how much Macalester and UWC are bubbles amidst what’s going on outside. My work and volunteer opportunities have allowed me to see a lot more of that. Of course, at Macalester, there are huge problems here as well, but I think sometimes we lose perspective in this very overachieving and academic part of life. Another big one is, like I said, how important identities are. I was reading about it the other day, but the more your identities match the majority, whatever “majority”’ means, the less aware you are of them. Just like men are less likely to talk about gender when asked about their identities. So, when working with immigrant populations, that just becomes very salient and that’s something they always have to continue thinking about. That’s an experience international students have, especially those from the Global South.  In my workplace where we tackle the prevention of gender-based violence, we realized that we were serving a different population with a different identity, with a different culture. So, our services also have to be culturally sensitive. I don’t know if that’s something we’re always aware of at Macalester, or when we’re discussing social issues here.

TMW: Where do you see this work reaching in the next five years?

Andrea: I really like both places I work with. Sometimes NGO work comes from “We know the answers and we’re here to tell you what the answers are.” Both [the places where I work] understand that first of all, that’s wrong and very patronizing, but also ineffective. Both CLUES and Esperanza United are mainly formed by people who hold similar identities to those who they serve. I think they recognize that change happens not when you, as a saver, go into the community and do whatever you think has to be done, but when people have the tools, and they make the change that they know their community needs. So I’m hoping in the next few years, they can expand their work.

With Esperanza United, the population that I work with are youth from middle school and high school so if I think in terms of those specific teenagers, I hope that in five years, they feel empowered with what we’ve been working on: having healthy relationships, on being comfortable with their identities, of knowing that they can do whatever they decide to do with their future. I hope that in five years when they finish high school, they feel that they can be leaders of their community. We always emphasize that we’re not the ones leading their community, they are the future of their communities.

TMW: Did you reach a low in your civic engagement and activism? How did you address it?

Andrea: I did have a low. It was in fall 2020 when I had to be especially careful of COVID. Back then my family was not vaccinated and I was at home because I hadn’t been able to get my visa to come to the US. We also hadn’t started classes yet so I had a few months where I felt like I was doing nothing.

But with the pandemic, it also felt challenging. In terms of the situation in Nicaragua that I care so much about, by this time, people were not really protesting a lot because the consequences are so extreme. It’s very hard to put yourself out there. I have family members that do and they’re super brave people, but I didn’t feel like I could be as involved knowing that possible consequences were going to jail without guarantees of due process or human rights protections, or even other consequences like having to leave the country. So, one way that I addressed it is, I joined a couple of friends and we started having Zoom meetings. We didn’t even know where that was going to go but we ended up creating this short, introductory online course on xenophobia. We don’t even know if people are doing it or not on the platform that we created. But just feeling that there were things I cared about and that there was a small thing I could do made it better.

TMW: Is there something you wish you knew before getting started?

Andrea: Knowing that you don’t have to have all the answers. I think sometimes we enter civic engagement spaces being very young with this naïve idea that what the world is missing is you. I’m not saying we cannot be changemakers, but sometimes we think we have to find immediate solutions. The truth is, a lot of the time we don’t have the tools, we don’t have the training, we don’t have the power, we don’t have the agency. But that doesn’t mean you have to stop doing things. I even had a moment, I think last semester, of feeling very hopeless with everything that was going on and feeling like there were so many terrible things in the world. Is there even a solution to this? Sometimes what helps is when you’re feeling hopeless is thinking, “What are small little things I can do today or in the work that I’m doing that will be somehow impactful?” That’s something I wish that I knew when I started caring more about things. I’m not going to solve any of humankind’s problems.

Andrea: I have so many wishes! A wish in terms of the work we do as Macalester students would be centering justice and intersectionality at the core of what we do. With everything happening, we’re living in a historical moment, and yet, we’re missing the chance to do things right. For example, with the global vaccine crisis right now, that was a chance to provide equal access to necessary medical services in the world, and we failed. I just wish we could realize that these historical times are so hard but they are also opportunities to change how things will be from now on. I wish we could be aware of them and make the right decisions where we center justice and equality. Vaccines are just one of them, but there are all these huge issues. And being able to question ourselves and I mean this as individuals, as Macalester students, as governments as the broader population. Questioning ourselves, centering justice and people’s well-being and appreciating their value as humans. That’s my wish.