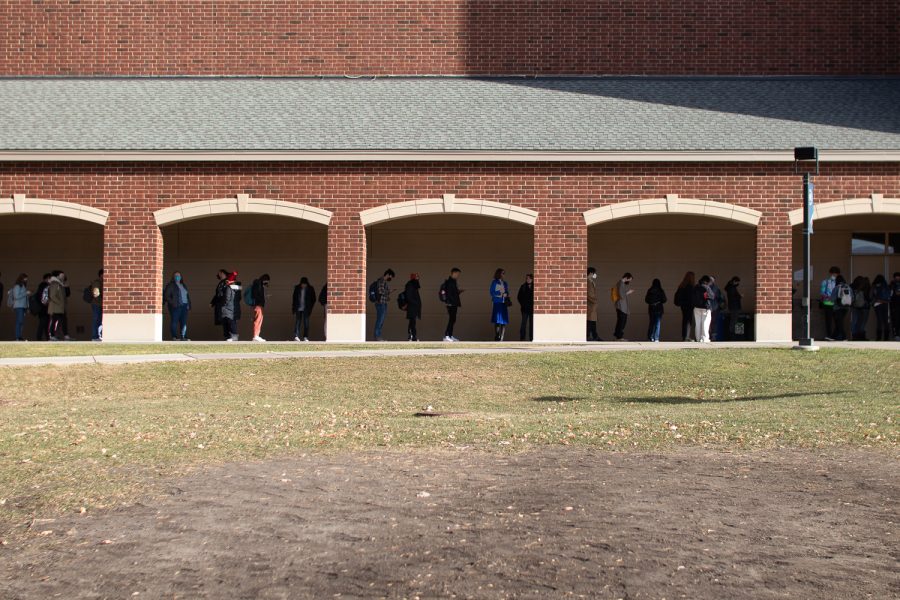 Last Tuesday, several hundred students showed up to the COVID-19 booster shot clinic provided by the Laurie Hamre Center for Health and Wellness. However, despite the extended wait, many students were unable to receive the vaccine.

The booster clinic was scheduled from 1:00 p.m. to 4:00 p.m. with many students gathering as early as 12:00 p.m. to wait in line at the Leonard Center. By the time the event had started, the line stretched outside of the doors and nearly to the entrance of the library.

Cooper Glick ’25 arrived shortly after the clinic began but left after realizing that they likely would not have the opportunity to receive the vaccine.

They explained how some students felt that there were not enough people working at the clinic to administer the booster shots, and that there was an overall lack of communication with students.

“No one had any idea what was happening,” Glick said. “I talked to some people who said that they had been there since 12:30. And I was very far behind them [in line].”

Following the booster clinic, Interim Executive Director of the Hamre Center Steph Walters apologized in an email to the student body, especially to students who were turned away, for the disorganization and long wait time.

“We planned the walk-in structure based on our previous success with walk-in clinics and student feedback that valued flexibility,” Walters wrote in the email. “In retrospect, this wasn’t the right approach and we want to do better.”

Glick said they wished the clinic had been structured with a longer time frame to allow for more students to receive the vaccine.

“I think that it should have been open longer, whether that meant opening earlier or closing later,” Glick said. “And I think that they also should have originally planned [for the clinic] to [last] multiple days.”

The Hamre Center is currently working on scheduling a second booster clinic before winter break that will be appointment-based in order to accommodate students’ schedules.

Free booster shots are accessible at several locations close to campus, including CVS and other local pharmacies. Walters encouraged students to look for availabilities within the community.

As the number of positive cases has increased in the Macalester area and the Twin Cities, booster shots have grown in importance in order to increase community protection. The uncertainty surrounding the Omicron variant has contributed to this emphasis.

In a Nov. 29 email sent to students, Director of COVID Operations Paul Overvoorde stated that in the past week, there had been 11 reported breakthrough cases: two employees and nine students, three of which live on campus.

Across the U.S., Minnesota currently has the highest COVID-19 infection rates. In Ramsey County, the rate of new daily infections is the highest that it has been in almost one year.

“I wasn’t planning to go home this year, but when I went to high school in Seattle, I always went back home during winter breaks,” Cecilia Tao ’24, an international student from China, wrote in an email to The Mac Weekly. “This year I’m still planning to travel but just in [the] States and with more caution.”

However, Tao explained that on top of not having seen her friends in nearly two years and her family not being able to visit her, she worries about the long-term consequences of COVID-19.

“International students aren’t able to go home as often … which could also cause mental health issues. There are also safety concerns from our families,” Tao wrote.

Additionally, Tema Zulu ’23 explained the challenges that she faces as an international student from Eswatini. The country has been affected by the recent U.S. travel restrictions as a result of the Omicron variant being found there.

For Zulu, ongoing protests in Eswatini also contribute to her difficulties going home.

“In the middle of political unrest, it’s really hard to know that you can’t go home,” Zulu said.

She emphasized the weight of the political tensions coupled with the detection of the Omicron variant in Eswatini.

“It’s complicated in that sense,” Zulu said. “Even if we wanted to go home, we can’t go home because we don’t know if [the college] is going to allow us to do online learning or not.”

In response to the recent increase in reported positive cases on campus and the Omicron variant, the college continues to emphasize upholding the Mac Stays Safer 2.0 Community Commitment.

Walters wrote in an email to The Mac Weekly that the Hamre Center intends on hosting future booster clinics for students who are not yet six months out from their second dose.

She also wrote that the college is considering requiring students to participate in COVID-19 testing following return from winter break and to report when they receive their booster shot in their student health portals.