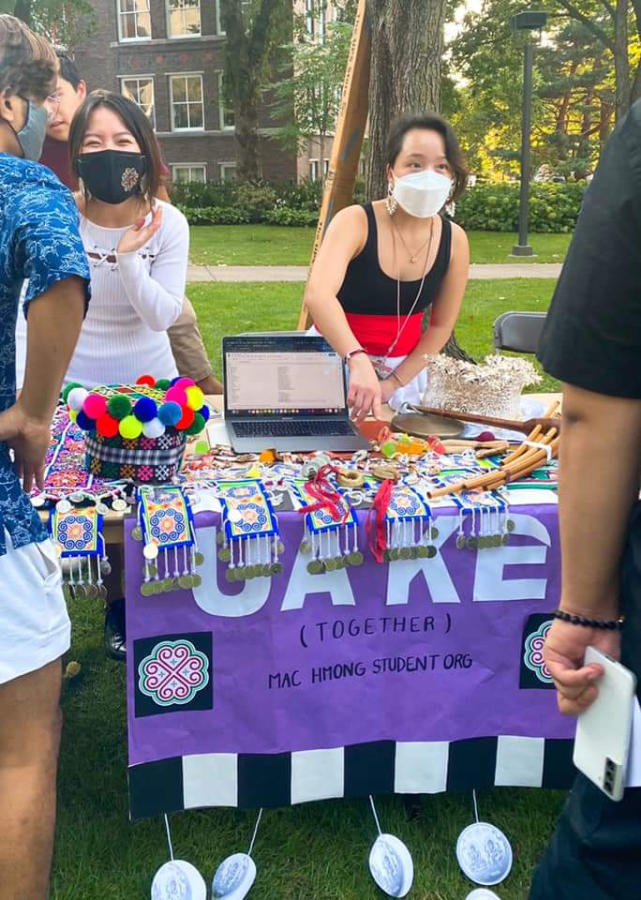 The letter also points to frustrations with the Communications and Marketing Department and with broader racist incidents and practices on campus, echoing frustrations from the Nov. 3 student protest in Kagin.

“The member fulfilled the request and banged the gong,” the letter reads. “The two students exclaimed that banging the gong was the much needed ‘content’ they came here for… They were incredibly insensitive and harmful to the Ua Ke member and the entire organization.

“Being reduced to ‘content’ for the sake of a white audience is dehumanizing,” the letter continues. “Culture is not entertainment when convenient.”

A student in Ua Ke shared their account of the incident on social media. Afterwards, both the student employee and Communications and Marketing reached out to the Ua Ke member to apologize.

The incident — and the apologies — didn’t sit right with Ua Ke leader Shouayee Vue ’22. For one, the apologies went directly to the Ua Ke member and, according to Vue, did not adequately acknowledge the harm to Ua Ke and to Hmong students.

This also happened around the same time that the Hmong Cultural Center Museum in St. Paul was spray painted with white supremacist slogans. Vue and other members of Ua Ke were shaken and angered by these incidents.

“I just didn’t want my underclassmen to feel unsafe here on campus,” Vue said. “That really burned an anger inside of me and really pushed me to do something.”

This wasn’t Vue’s first time feeling isolated as a Hmong student on campus. When she arrived at Macalester, she said, there were only about five other Hmong students, despite the college’s location — the Twin Cities are home to the U.S.’s largest concentration of Hmong people.

“I had a big culture shock coming here,” Vue said.

Due to the small student population, Ua Ke has been more of a social group for the last few years than an active cultural org. This year, though, Macalester has more Hmong students — college data reports 10, and Vue says she’s met about 13 who self-identify as Hmong.

Hoping to address the hurt from the incident, Vue sat down to write a letter about it after meeting with Ua Ke. She thought of sending it to the Communications office, but never ended up doing so.

“After all the racist things that’s been happening on campus and especially [the student sit-in], it really brought me to think, this is not an individualized, solo, one-person problem, this is not just Ua Ke’s problem,” Vue said. “This is a conversation that everybody here, BIPOC students, are talking about, and if 500 people showing up in Kagin is not enough, what about over 100 signatures on our document?”

Instead of sending it directly to Communications and Marketing, Ua Ke posted the article on class Facebook pages and shared it with other students, asking for signatures of support. Over 150 have signed it so far.

Ua Ke is not the first student group to raise issues with Communications and Marketing. Students at the Nov. 3 protest said they were irritated that photographers on campus would take their photos and publish them in college promotional materials without asking permission to take photos.

After posting the letter, Ua Ke received another email from Communications and Marketing, apologizing again and outlining the steps that the office is taking to respond to the complaints.

Assistant Vice President for Marketing and Communications Julie Hurbanis said that her office has been discussing changes to their protocol since September, when they first became aware of student complaints.

The office started noticing early in the year that students seemed less willing to be photographed than they usually were. Hurbanis said that in the past, students usually ignored photographers taking general campus photos or would jump into the shot. This year, more students were asking not to be in photos or intentionally sidestepping the cameras.

“We started having conversations about [how] it feels like something has changed, and so, how do we ensure that we’re being supportive of that?” Hurbanis said.

Following this and Ua Ke’s experience at the involvement fair, the department started testing out some new protocols, like using signs at events to let people know that photographers are present and allowing attendees to put stickers on their name tags if they don’t want to be photographed.

The department is also asking photographers — both freelancers hired by the department and student employees — to wear badges on campus if they’re recording or taking photos.

Vue appreciated the second apology from Communications and the summary of the changes in the department, though she said she hopes that more staff and academic departments on campus will continue discussing racism and rethinking their practices following the student protest and Ua Ke’s letter.

While the institutional responses are still underway — or on the horizon — Vue noted the importance of the solidarity she’s heard from other students.

“It’s very empowering to see that a lot of people, a lot who I’ve never personally talked to, or introduced myself to, have signed electronically on this letter, and it just makes us feel very supported,” Vue said. “From my experience, being an Ua Ke member, it felt very much so alone… and knowing that there are other people here to support us… I feel a bit better.”