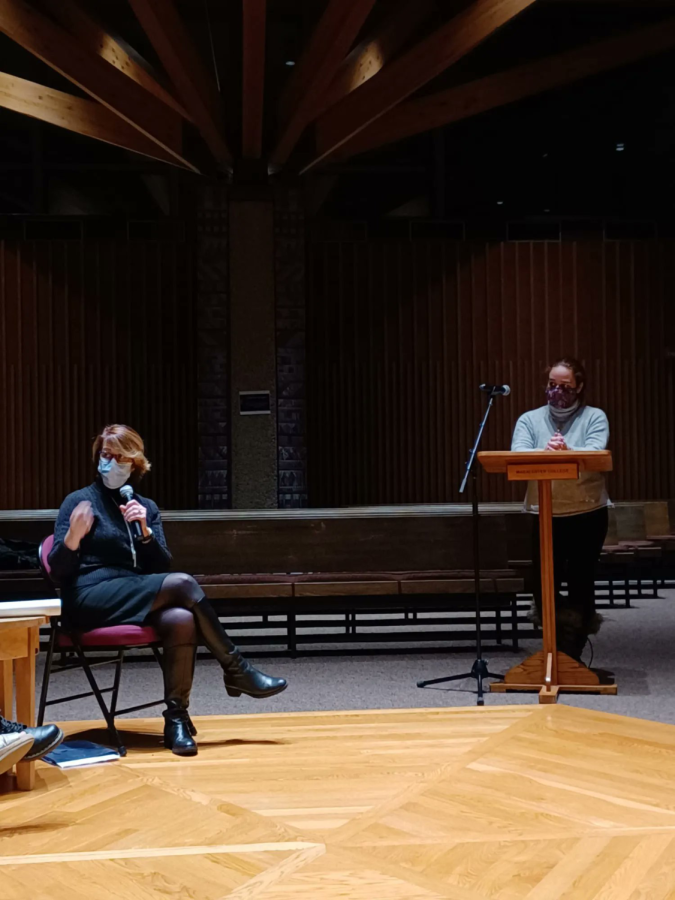 On Thursday, Nov. 11, students gathered in the Weyerhaeuser Chapel for Imagine Minnesota! to hear about the state of Minnesota politics, the 2022 elections and Minnesota state Sen. Erin Murphy’s hopes for the future.

The event was co-sponsored by the Civic Engagement Center (CEC) and ISAIAH, a Minnesota faith-based organization fighting for racial and economic justice in the state.

St. Paul councilmember Mitra Jalali was supposed to speak along with Murphy, but recently tested positive for COVID-19 and was unable to attend.

Members of the CEC’s community organizing cohort, a program for Macalester students to learn organizing skills with the help of CEC and ISAIAH staff members, hosted the event. Moderators began by highlighting Macalester’s influence as a voting block in St. Paul and discussing larger Minnesota politics.

“This discussion was organized to bring awareness to local and state officials about our concerns and politics as a Macalester student body,” moderator Isabella Benjamin ’25 said. “As a student body, it is important to understand that we are committed to having our voices heard and making an impact in our own community.”

For the bulk of the event, Murphy answered questions from student members of the cohort about issues that were prominent in the 2021 election cycle.

Jackson Long ’25 posed the first question to Murphy about rent control in St. Paul. In the 2021 elections, the city passed one of the strictest rent control policies in the country — starting immediately, landlords cannot raise their rent more than 3% in one year.

Long asked Murphy what the next steps are for activists and politicians now that this policy is law.

“We know that housing is a crisis, a crisis of affordability, in some cases, access, and for many renters insecurity,” Murphy said. “Everybody deserves a safe, secure place to live, a place to call home.”

Another major question on Twin Cities ballots was on policing in Minneapolis. The question asked whether voters wanted to authorize the city council to begin replacing its police department with a public safety department.
“Can you share how we can get together in the next years to cultivate conversations regarding the role of policing at local and statewide levels, while simultaneously creating more just and equitable means of gaining neighborhood safety, and what are the conditions that we are up against with regard to this issue?” Luca Comparato ’25 said.

Murphy spoke about how this issue is front and center in Minnesota politics right now and must be addressed to ensure safety in our communities. She believes this safety does not come from police response, but from providing communities with enough resources and cultivating feelings of belonging.

She emphasized the importance of holding police accountable in their work. Many of the measures directed at police reform that made it to the state legislature, including ensuring there are no white supremacists in law enforcement, were blocked by the strong political sway of law enforcement in the legislature.

Other questions addressed the parental and sick leave policy in Minnesota, climate change and the power of the legislature to enact the policies they commit to and the role of students in centering important policies.

Birdie Keller ’25 asked Murphy about the threat posed by climate change and how Murphy, who is the 2022 Senate DFL campaign chair, will ensure that the 2022 elections bring the political conditions to pass as much legislation as possible.

“Getting really clear about [what the agenda is] when we take power so that we can move it in the two years that we have is probably the number one job that we have to do,” Murphy said.

“I view you as powerful players in this next election,” she said. “I would love to be in relationship with you, both in terms of the work that we are going to do between now and the next election.”

At the beginning and end of the event, Elliot Altbaum, young adult coalition organizer for ISAIAH, spoke about where we are politically as a country. He discussed the struggle around racism and democracy in the U.S., the impact of COVID-19 and the power of young voices in changing political conversations.

He urged students to work with elected officials to ensure that the political mandate they want becomes a reality.

“I think, for me at least, there are times when it feels like, ‘What’s the point, is anything going to change?’” Altbaum said. “For me, the only way to get through that is by doing the work… The best antidote to our cynicism is working together.”

Altbaum closed the event by asking students if they had a word or phrase to describe how they were feeling after the event.

At the end of her time speaking, Murphy was given an opportunity to come back to the idea of dreams, something that Keller brought up in her question.

“What I’ve learned over time is that we really do have the capacity to build a future that we believe in,” Murphy said. “It takes not just getting votes into the ballot box, but really connecting with people… I want to stand in the shadow of John Lewis, I want us to do what we can do together for the people, for our democracy, for equity.”