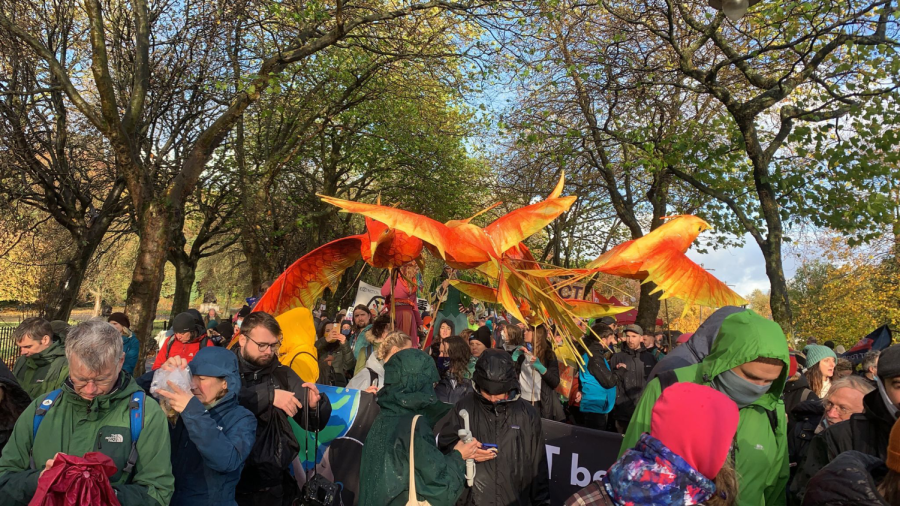 The 26th United Nations International Climate Conference, or COP26, wrapped up last Saturday; Many of the delegates left feeling the conference had fallen short or were unsure of how to act on climate change.

Macalester students, faculty and staff who were able to attend the climate conference both virtually and in person told different stories of optimism and pessimism. Significant criticism of COP26 stemmed from the fact that the peoples most affected by climate change had limited seats at the table, while others took up more space.

“There were over 500 representatives of fossil fuels at the conference, far more than any country,” Lola Brown ‘23, who attended the conference virtually as a youth delegate for the Episcopalian Church, said.

Brown is right— 503 delegates with fossil fuel interests attended the summit, according to the BBC. This is more than any individual country and makes up 2% of the 25,000 delegates sent to COP26. The conference spent most of its time discussing Article Six of the Paris Agreement, which discusses carbon emissions and aims to keep checks on countries who produce the most greenhouse gases. But the conference was missing notable players in that discussion: Russian President Vladimir Putin did not attend the conference, and neither did Chinese President Xi Jinping. China and Russia are the first and fourth-biggest carbon emitters, respectively.

Students found the lack of voices most affected by climate change discouraging. Women, Indigenous people and young people are among the most vulnerable to climate change, but were not as present at the conference.

“People who live on the front lines of climate change and who experience the most adverse effects aren’t able to afford to fly to Scotland because of COVID concerns or various other things, and even when they are, they’re kept out of the negotiations,” Brown said.

“There is a disconnect and an outrage that young people, Indigenous people and smaller nations are feeling,” Juliette Rogers, a professor of French and Francophone studies who attended the conference, said.

As the conference progressed, protestors gathered outside, led by activist Greta Thunberg and others. Thunberg slammed world leaders for their “failure” to respond to climate change as the U.N. reported that the world is not adapting to climate change fast enough.

At an event dedicated to solving climate change, this sort of attitude isn’t unusual. Dire talks can understandably lead to feelings of “horror and helplessness,” as English professor James Dawes described them after attending the conference, but most attendees interviewed also spoke of the importance of maintaining hope for the future.

“The media … has been super negative about [COP26] and I think that’s really unfortunate, because as I’m standing here on the ground talking to people, the people who are here could not be more positive with each other,” Bella Garrioch ‘23, a Macalester student who attended the conference in person, said. “I’m listening to experts and really passionate people talk about all these different projects they’re doing, and it makes me really hopeful and I’ve only felt really positive since being here.”

Additionally, while many noticed the absence of Indigenous, female and youth voices
in policy meetings, others applauded the work that different marginalized groups were able to accomplish at the conference.

As much as students are aggravated by aspects of COP26, reflecting on the environment served as an interesting perspective for their own lives and the world around them.
Solveigh Barney ‘23 is a Macalester student who attended the conference virtually through the Episcopalian Church.

“I’ve been trying to go to conferences on youth, female and Indigenous voices, because those are three categories that encompass my identity,” Barney said. “My grandparents were disassociated from our Indigenous roots, but COP26 and environmental studies have emphasized that for me and have a place of comfort.”

While Macalester did not directly send any students to COP26, six members of staff and faculty were chosen to represent Macalester and bring their experiences back to the community. Professor Louisa Bradtmiller works in environmental studies and attended the conference for the first time last week.

“We have these different pathways that we can choose, as far as what we as a global community are going to do in terms of reducing emissions,” Bradtmiller said. “When I think about bringing this stuff back to my class, what makes me very optimistic is that the science is settled. The goal here is to keep warming under a degree and a half [Celsius]. That’s a goal that is set in science, and these policymakers are listening to the science. I think that’s a really important message for my students.”

An international conference on the future of our planet will always be daunting. Despite the differing views of where COP26 succeeded and where it failed, attendees from Macalester agree that the world has a mountain of work to do to combat climate change.

“My takeaway from the conference is that we are in the endgame,” political science professor Michael Zis said. “It is not yet too late, but it is pretty close. What I’m taking back is a feeling that, for the remainder of the time I have at Mac, I want to be one trillionth a part of the solution. Whatever our chances are for making this work, I want to be on the side that tried.”