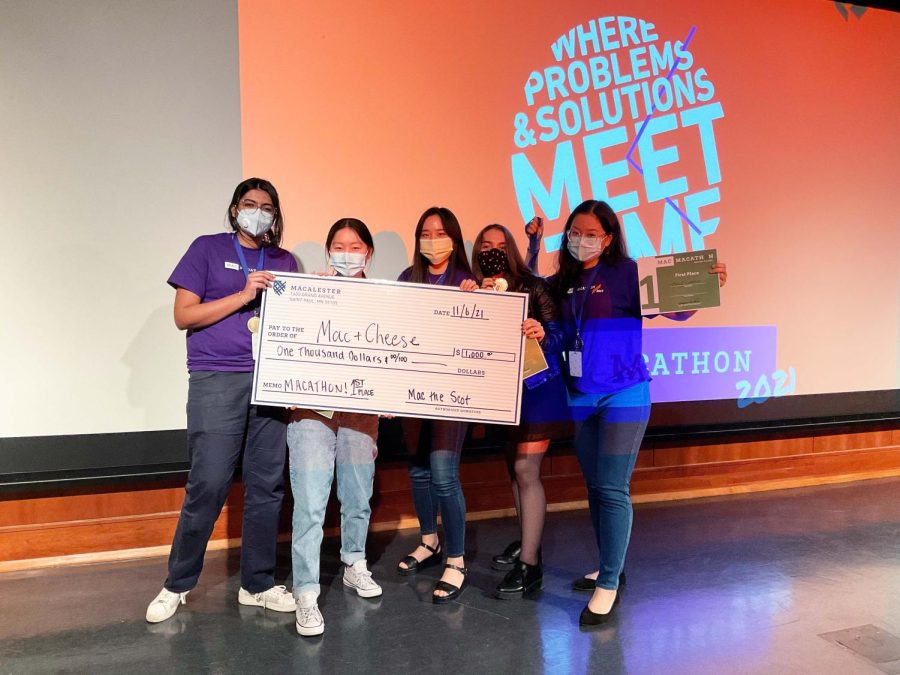 Last Friday, 90 students ce​​remoniously marched from Mairs Concert Hall to Olin Rice with pillows, blankets and snacks in hand. Making its return from a two-year hiatus, this marked the beginning of the 2021 Macathon. The students knew creativity, stress and problem-solving were to come in the next 24 hours.

“Macathon is designed to be an idea process, where the outcome is less about winning Macathon or finalizing a product, but about the process of creating a business idea and then working on that business idea,” Interim Director of Entrepreneurship and Innovation Jody Emmings wrote in an email to The Mac Weekly. “It pushes students to dig deep and think hard about their ideas.”

“I have very little expectations,” Jack Keller ’22 said before the opening ceremony.

“I’m just here to have fun and hopefully make something cool in the process,” Aahanaa Tibrewal ’25 said.

Many groups were new to the competition, but some juniors and seniors had previously competed. This experience gave them at least some idea of what was to come.

“We didn’t have a problem we wanted to solve beforehand last time,” Mason Chambal ’23 said. “We’ve at least come up with a problem this time.”

Despite competing against groups with prior experience, groups new to Macathon did not seem overly concerned.

“Other groups also mostly had people who didn’t compete in Macathon before because it was cancelled last year,”  Andrew Fidal ’24, member of group Stereo Side A, said. “All of the sophomores, first years and many of the juniors and seniors didn’t participate, so I don’t think of it as a disadvantage at all.”

Although teams are permitted to consider the problem they would like to solve before the 24-hour competition, they cannot begin researching or considering solutions until they enter the room.

Some teams who had previously participated were not drawing so much on past experiences but instead just looking to have an enjoyable weekend activity with friends.

“We’re just having fun,” Katie McCarthy ’22, member of the group The Prince of Denmark, said. “We’re just gonna be throwing out stupid ideas, having fun, and laughing a lot … we also talked it over as a group that we’d like not [to have] expectations or anything, except to enjoy the food and enjoy each other.”

During the event, students are assigned rooms in Olin Rice in which they work with their teams, starting around 6 p.m. after a dinner catered by Shish was served. Throughout the night, judges — Macalester alumni — met with teams to discuss their ideas and process.

Since Macathon is an overnight competition, teams do not get much sleep. Emmings said that students often rotate taking naps. She encouraged teams to make sure to get sleep when she gave her opening speech.

Emmings described the main goal of Macathon as “working to redefine the world in which we live.”

Early in the night, ideas began to take shape in Olin Rice. Teams’ ideas included a subscription-based service for coffee shops, fostering cheap collaborative work spaces and a crypto-currency mining app that people could use from their phones, which would then help displaced people around the world. Another team designed a ring for disabled people who walk home alone that would allow for a more accessible emergency response experience.

“The problems that people were looking to solve were important problems,” Macalester President Suzanne Rivera said after the competition, her first Macathon.

A new addition this year was the introduction of Virtual Alumni Mentors, young alumni who met with the teams on Slack throughout the night to provide additional support and feedback. Many of these alumni are in the technology field, including a software engineer at Facebook. These were in addition to the traditional in-person judges.

“The problems students choose to tackle are not small and not restricted to their experience at Macalester,’’ Macathon judge Anna Graziano ’13 said.

On Saturday, teams participated in the semifinal round, in which five to six teams per group presented their projects to judges. The top two teams from each group advanced to the final presentation, after which judges decided the top three teams.

The winner was the group Mac and Cheese, which presented the idea of using thermoplastic polyurethane (TPU), a recyclable and biodegradable material, as a replacement for wasteful single-use packaging materials. The idea was inspired by one of the team members working in the mailing office. On the team were Rola Cao ’25, Hanna Kong ’25, Rachel Christensen ’25, Huihui Jiang ’25, Aahanaa Tibrewal ’25 and Melissa Ballin-Cardona ’25. The team won $1,000 for their efforts.

The second placed team was InterAJA, which created an app designed to help people in domestic violence crises. The app had several features including emergency contacts, crisis helplines and local shelters. The app is disguised as a calculator. The team members were Jonas Costa ’23, Alice Bruno ’23 and Alessandra Rosa Policarpo ’24.

The third place team was Prince of Denmark, which created a spray filled with spicy ingredients designed to give a boost of energy by giving the user “sensory energy.” The team consisted of McCarthy, Alex Rössel ’22, Lucas van den Heuvel ’22, Natalie Parsons ’23 and Justin White ’22.

Judging for the Macathon is based on a rubric that takes into account the problem, the solution, the product that the team creates and their seven-minute presentation at the end of the event. According to Emmings, though, the Macathon is not so much about winning as developing creative solutions.

“Teams with students who approach Macathon with curiosity and fun, ask tons of questions and go bold on the problems they tackle usually go far,” Emmings wrote.

“Students are already working on needed solutions to problems they care about,” Emmings continued. “Macathon invites them to do it in a community to build forward together — by creating teams, pausing for 24 hours to work with each other and alumni mentors to dream up bold and brilliant ideas.”