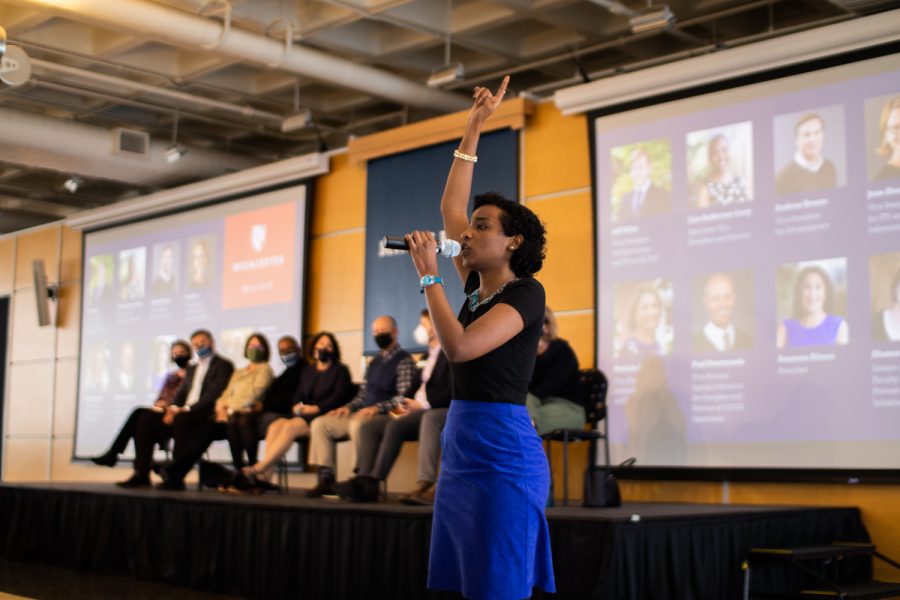 On Wednesday Nov. 3, hundreds of students and staff arrived at the Senior Staff Coffee Break and Q&A in the Kagin Ballroom to protest Macalester’s treatment of BIPOC and international students. For the next five hours, students expressed their frustration with the college’s lack of accessibility, response to racist incidents on campus and lack of financial and academic transparency. Over the last week, initial efforts have been made by students, faculty and the administration in response to the concerns raised.

Rayan Abubaker Ahmed Hamid ’22 organized the sit-in and spoke for the first hour and a half of the event about her experiences as a BIPOC international student and student activist at Macalester. She spent several weeks leading up to the sit-in organizing events to raise awareness around the  military coup in Sudan, her home country.

While Rayan focused on her personal experiences, she and other speakers at the event linked together a number of issues of racism, burnout culture and lack of support that students have been facing for months, or longer.

“I’m tired of me and other students on this campus being silenced and being told, ‘Actually, if you go to class, it will serve as a good distraction for all the things happening in your life,’ because that’s what Black students were told when they went to administration and they said there’s a lot going on,” Rayan said.

The event has sparked conversations across the campus and heightened student activism and organizing. Rayan also hosted a fundraiser for Sudan on Nov. 9. The event was originally set in the International Students Program corner of the Kagin Commons before it was moved to the larger MAX Center on the same floor because of the sizable turnout. By the start of the event, over a hundred students were in attendance. Rayan started by explaining the coup and subsequent violence currently occurring in Sudan. Multiple sheets of paper with QR codes circulated through the crowd throughout the event publicizing reliable sources of news on Sudan, including one linking to Keep Eyes On Sudan, a website run by the Sudanese diaspora and one linking to the Twitter of Sudanese Journalist Yousra Elbagir.

Rayan reiterated her demands for last Wednesday’s sit-in at the fundraiser, including a strict policy against hate speech and discrimination, a way to anonymously report instances of these infractions directly to senior staff and Macalester resources made more accessible and transparent instead of a single aid fund. In the second half of the event, she changed into a tobe (traditional Sudanese garb) and played Sudanese music and danced with the other students in attendance.

Students also aim to advance these conversations by organizing and attending events and engaging in student-led projects to support fellow BIPOC and international students.

Last week, Unlearning White Supremacy, a group for students, faculty and staff, held a meeting to cultivate reflection on the sit-in. According to an announcement in the Mac Daily, the event was to allow “all those who hold white privilege and institutional power to reflect on … internalized white supremacy.” A few hundred students and a couple dozen faculty members attended, along with over a hundred virtual participants, and engaged in both small and large group discussions.

Isabel Nelson, associate director of admissions events and a coordinator of the Unlearning White Supremacy event, explained that the group hopes to hold similar events in the future to further encourage anti-racist and anti-white supremacist dialogue.

This past week, students have worked to get mutual aid efforts off the ground. Mutual Aid at Mac held an event last Sunday which BIPOC students criticized for its organizational flaws and white student leadership. The mutual aid effort and a student-run Instagram account, @mutualaidatmac, are now being organized by AJ Papakee ’24. For now, Papakee is collecting donations and connecting with interested students to start a process of redistributing funds to those in need and to plan out the next steps for mutual aid. The account has worked with @macsnackss, selling brownies and putting the collected money towards the fund.

Macalester administration has also responded to these calls to action.

In response to the sit-in last week, President Suzanne Rivera and Executive Vice President and Provost Lisa Anderson-Levy sent an email to the student body outlining several steps they would take in the following 24 hours. This included asking the Educational Policy and Governance Committee (EPAG) “to consider adding a wellness day to this semester as soon as possible.”

EPAG unanimously voted to schedule a wellness day on Nov. 12. Duchess Harris, professor of American studies and political science and a member of EPAG, wrote in an email to The Mac Weekly that EPAG reached this quick decision “in light of urgent and important student concerns.”

“The faculty members [on EPAG] were unprepared for the detected traces of students’ mental distress, but such an act of solidarity was beyond their expectations,” student representative on EPAG and AAC Chair Tom Liu ’24 said. “So [this wellness day] was in response to the urgent need for students’ wellness.”

“I hope people who were present and heard so many specific examples of bias incidents and microaggressions can understand their impact and immediately apply that learning in their daily lives,” Wells wrote in an email to The Mac Weekly.

Anderson-Levy also emphasized the need to support students across campus, especially in student and academic affairs.

“My leadership team and I will continue to work to figure out how best to invest resources that have the greatest positive impact in students’ lives,” Anderson-Levy wrote. “What might it look like to increase the number of staff and faculty who are safe harbors for students?”

Following Rivera’s initial request for faculty to make space in their classes to discuss students’ concerns, numerous departments also discussed how best to proceed following the many concerns about classroom climate and faculty that students voiced at the sit-in.

Students specifically expressed concern with the economics and political science departments. Sarah West, chair of the economics department, wrote in an email to The Mac Weekly that the department is committed to creating learning environments in which all students thrive. On the advice of an economics faculty member, economics professors were instructed to leave the classroom to make space for discussion.

Faculty in the political science department met twice on the Thursday following the sit-in to plan and reflect on their department’s classroom responses.

“To my knowledge, all members of the department addressed Wednesday’s events last Thursday and Friday, revised their syllabi to provide space for a wellness day this Friday, and are approaching their students with flexibility and compassion,” Lesley Lavery, the chair of the political science department, wrote in an email to The Mac Weekly. “We are working to develop additional opportunities for and channels of communication and support.”

In an email to the student body on Wednesday, Rivera and Anderson-Levy announced three upcoming events to hold space for conversations surrounding concerns raised at the sit-in. A listening session for international students specifically will be held on Nov. 15. Two other events will be open to all members of the campus community — a Nov. 18 webinar on fundraising and a Dec. 2 forum “with the goal of hearing about student concerns and exploring potential next steps.”

Bergen Schmidt contributed to reporting for this story.