Planting seeds of well being: Biophilia at Mac 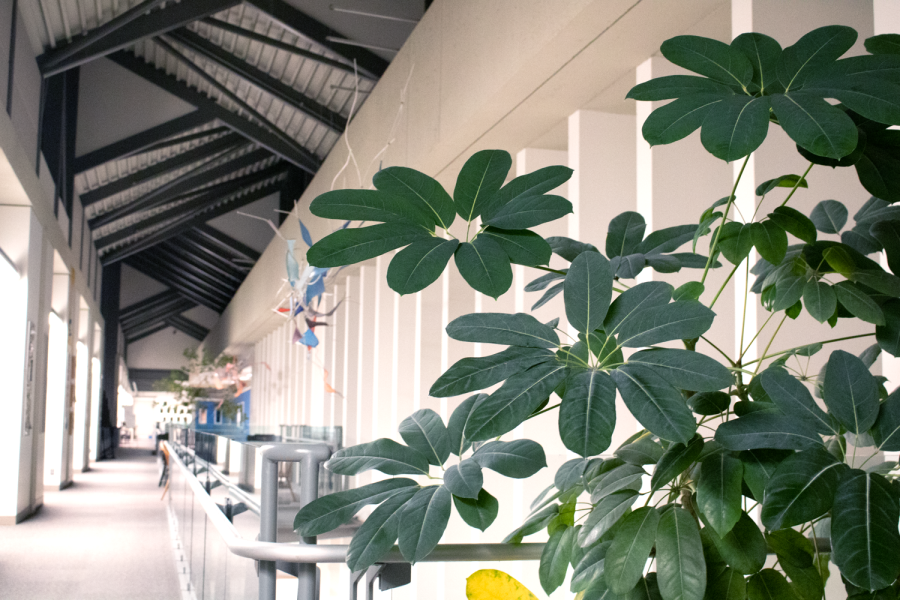 Plant life and greenery are inherent parts of Macalester’s campus and everyday life. While many say they enjoy being outside simply because they enjoy nature, American biologist Edward O. Wilson has gone a step further. He posited that humans possess an innate tendency to seek connections with nature and other forms of life. Wilson’s theory, known as the biophilia hypothesis, places an emphasis on interaction between humans and nature and is applicable in all walks of life, even here at Macalester.

According to Director of Sustainability Christie Manning, the biophilia hypothesis extends beyond humans simply wanting to connect with nature.

“There’s lots and lots of evidence showing that we human beings are happier, we do better at regulating our emotions, we do better cognitively [and] our stress levels are lower when we have a connection to nature of some kind,” Manning said.

The Macalester Conservation and Renewable Energy Society (MacCARES) is a student organization centered around bringing sustainability directly to Macalester’s campus. Elika Somani ’22, co-leader of MacCARES, said the organization views the presence of nature on campus to be important because it directly addresses a need of the student body.

“People really have a desire to be with nature,” Somani said. “There is a lot of research about being in nature and mindfulness [and] we’re motivated by that. People really engage with [our] events on campus and so we keep doing them.”

So how can biophilia be encouraged on campus? Manning, who has posed a similar question to students in her environmental science classes in the past, said students often suggest a wide range of potential projects. These include finding ways to increase the presence of nature inside and engaging students outside in natural spaces.

To document the potential benefits of bringing biophilia to campus, Manning proposed a longitudinal study that would look at how students’ well-being was impacted by the presence of the plants.

“You can measure mood, you can measure well-being [and] see if there is an individual effect [on people] before and after they spend time in these spaces,” Manning said. “You can also look community-wide to see if there are differences in people’s perceptions of our campus before we make these spaces accessible [and] after.”

There are certain limitations when it comes to increasing plant life on campus by a major scale. According to Assistant Vice President of Facilities Nathan Lief, the current priorities of facilities do not allow for the school to grow plants on a large- scale inside campus buildings.

“We just don’t have the manpower to be doing that,” Lief said. “It’s not really feasible because there’s a cost involved with the initial purchase of the plant, and then of course [having to have] people dedicated to that maintenance.”

However, it is not unthinkable for school policies to change, especially when they have the potential to increase sustainability. Macalester began composting across campus full time in 2013 in order to reduce waste. According to Lief, this shift required a significant change in focus of the custodial supervisors. For a change in indoor plant policy to be made, it would come down to the amount of resources that the program needed.

“It depends on what [the program] is and how much resource has to be dedicated to it,” Lief said. “If we’re going to pick up new responsibilities, you either have to add additional resources or you have to stop doing something that you’re already doing.”

Although large shifts toward biophilia across campus are not currently in the cards, there are still many organizations and programs on campus that are working toward fostering interaction between students and nature. Over the past summer College Chaplain and Associate Dean Rev. Kelly J. Stone and the Center for Religious and Spiritual Life (CRSL) led a program called “Growing Together” with the hope of fostering community through work with plants. Stone used plants as a conduit to appease potential worries that arose from returning to campus full time.

“One of the things that came up for me was finding low risk ways for us to gather that felt as safe as possible,” Stone said. “We had some pots here, and I was like, ‘I wonder if we could just invite people to bring the things that have been growing.’ ”

The program was held for several weeks throughout August for faculty, staff and students. CRSL also offered a session during first year orientation where participants were able to take home a small plant for their dorms.

Other initiatives, such as the two campus gardens and plant- related events run by MacCARES, connect students with the natural world around them. The two gardens located by the Spanish house and sustainability offices are completely open to students and allow the community to bond over the shared task of gardening. Currently, Somani said, the events that MacCARES holds are meant to serve the wants of the community.

“Our approach this year has been letting the students who are in the org do what they want to do, and we’ re just supporting them in those events,” Somani said. “A lot of it has been focused on, especially this year when people have so much going on in their [lives], positive sustainability and positive environmentalism.”

As Macalester continues to work on becoming a more sustainable campus, Manning hopes that students’ relationships with nature will continue to be fostered. Beyond the direct impact on campus, Manning believes that work done by the college to create a more biophilic environment will reverberate out into the surrounding communities.

“Things that we learn on campus, and that we practice on campus, end up having a larger life both through the collaborations that we form as a community and the work we do learning together with communities outside the boundaries of where we’re located,” Manning said.