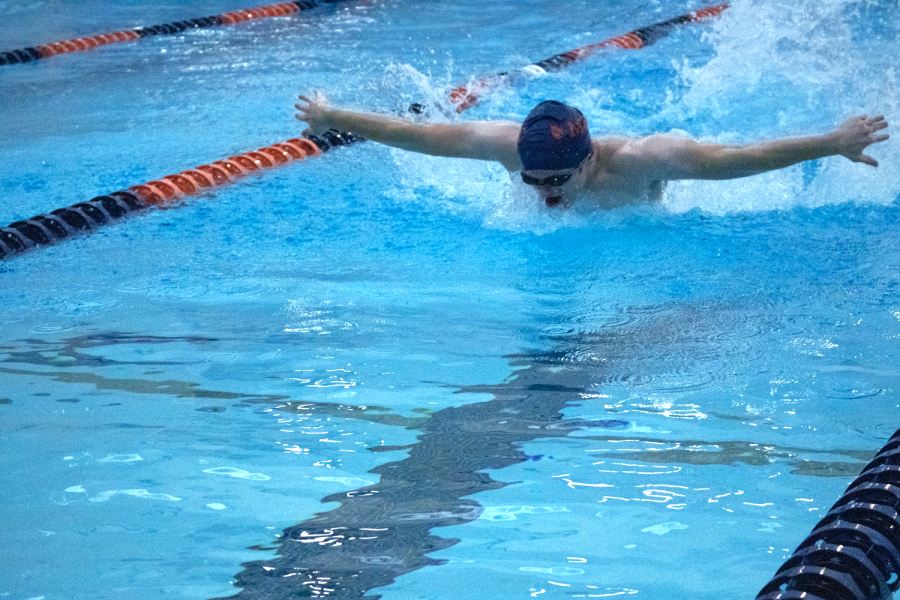 For the past 16 years, swimmers from Macalester, and across the world, have swam 50-meter relays for one hour straight in November to raise money for cancer research at the University of Chicago Medicine Comer Children’s Hospital— specifically for research on pediatric sarcoma. On Nov. 9, the Macalester swim and dive teams participated in the annual challenge, organized through the Ted Mullin Fund under the name Hour of Power.

Ted Mullin was a swimmer at Carleton College in the early 2000s. Though he was not the most accomplished athlete, Mullin gave his all every time he dove in the pool. Because of his intense effort in every single length he swam, the Hour of Power’s slogan is “Leave it in the pool.”

“Ted [Mullin] was not the most talented athlete in the world, but had a reputation for being the hardest worker on the team when he was there,” Macalester assistant swim and dive coach Wilson Josephson said. “He’d be the person who was cheering his teammates on the loudest, and always pushing himself to try and get 100% out of every set — not just every day, but every set, everything he was doing in the water.

“This set that we do — and that 100 and however many schools around the country do —  for the Hour of Power, was his favorite set as a student-athlete,” he continued.

Mullin had a rare form of cancer most common in young people, called pediatric sarcoma. On Sept. 3, 2006, he passed away due to cancer, shortly before his scheduled graduation in June 2007. Since then, his former teammates, family and friends have organized the Hour of Power in his name every year. In 2006, the 15 teams participating — mostly from the Midwest and Northeast — raised $11,000. It has ballooned since then, with a peak of 183 teams participating by 2014. Since then the Hour has stabilized to between 160-180 teams every year. In 2019, 170 teams participated.

Over these 16 years, the Ted Mullin Fund has raised over $1.5 million for cancer research, with the Hour of Power program contributing 60% of that money.

Macalester’s participation in the Hour began early on and continues today. Josephson described it as a powerful and emotional event focused on teammates and other loved ones.

“You’re really trying to honor your teammates and honor people in your life who have been affected by cancer. I know for our team pretty much everyone … has had someone in their family or in their life that’s been affected,” Josephson said.

The Hour of Power is an hour-long, continual relay, using any stroke, with the entire team participating. Every single lap is all-out because that is how Mullin approached his athletic career. Additionally, all lanes need to stay on the same lap, which fosters teamwork. When not swimming, athletes cheer each other on, catch their breath and, at Macalester, sing along to Lizzo. Though divers can participate in the laps, this year they chose to grab bright orange pom poms and cheer their teammates on from the sides of the pool. Coaches, athletics department staff, other athletes and family and friends of Mullin also gathered to encourage the team.

As they cheered, both head swim and dive coach Kyllian Griffin and Josephson were watching to see how their athletes supported each other, stepped up and acted as they reached deep into their reserves of energy after the 30-minute mark.

“By the time you get 30, 35 minutes in you sort of start to reach a different plane of consciousness,” Josephson said. “It’s a really, really powerful event, and one that I think necessitates a lot of support as well.”

“The broad goal … is to think about something beyond yourself a little bit,” Griffin said. “To think about why you do this and why you put this energy forth, and, more importantly, this is an opportunity to swim for someone other than you.”

The effort was certainly on display throughout the hour, particularly during the last minute when the final swimmer in every lane pushed themselves to the limit to finish their lap before the buzzer went off. Griffin and Josephson cheered their swimmers on as they completed their final lap.

This is Griffin’s fourth year with the team, and he hopes to go further in the Minnesota Intercollegiate Athletic Conference (MIAC) than in 2019. The men came in seventh out of eight teams in the MIAC, sending just two athletes to the finals. The women did better, coming in seventh out of eleven teams with five athletes in the finals and one diver Francesca Gillis ’20, qualifying for the regional NCAA meet.

Griffin, however, believes the team can improve on those finishes this year.

“We, of course, would love to move up in the conference and improve in that way,” Griffin said. “I think we have a real chance at it, particularly on the women’s side of the meet. This is really a year for Macalester swimming and diving to show up at the conference.”

The women’s team currently holds a 0-2 record, plus a second-place finish at a four-team meet at Luther College. The men’s team is 0-2 and finished last at the Luther meet. Both teams, however, have several exciting first years and sophomores who have podiumed during their first three meets. This includes stellar divers on the women’s side — Katie Kelbrants ’23 and Kate Yelhe ’25 — who have podiumed at every meet so far.

On the men’s side, Benjamin Blomquist ’22, Aiden Williams ’22 and Tanner Hubbard ’22 continue to hone their skills, both posting several second and third place finishes over the past three meets while several first years are surging onto the podium. Charles Batsaikhan ’25, in particular, has won both the 100-yard and 200-yard breaststroke already this season.

With many talented underclassmen, Griffin and Josephson are excited for the future.

“This is maybe a bold thing to say, but I want Macalester swim and dive to win a MIAC championship,” Griffin said. “We’re closer than we’ve been in a long time. It might take five years. It might take ten years, but that’s the direction we are heading.”