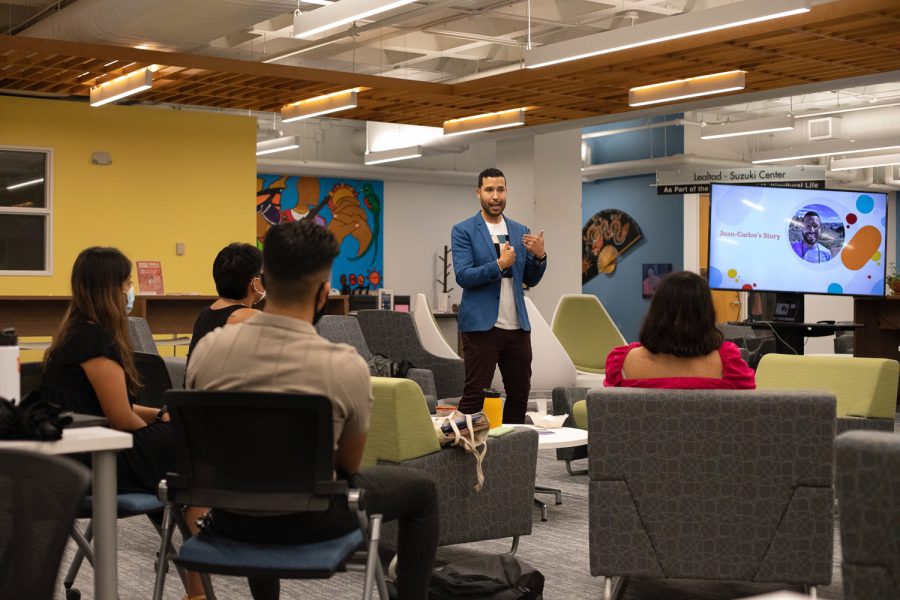 Solidarity has become a key component of what it means to be a Latinx student at Macalester. Despite the overwhelming presence of white students, Latinx students have been able to bond together and find comfort in each other, even at a college where diversity and support for different cultural groups is often lacking.

In the past, students have sought out fellow Latinx classmates in an attempt to create a bond that will endure the trials and tribulations of attending a predominantly white institution (PWI). It is because of this that acknowledging the influence of Latin America and celebrating the accomplishments of various Latin American individuals has become a priority for the Latinx Student Union (LSU).

In other words, for Latinx students, Latinx Heritage Month is everyday. The act of celebrating Latinx culture can be performative, as there are a multitude of ways to highlight it. This celebration does not need to be limited to Latinx Heritage Month, as it often is in higher level institutions that want to “show solidarity.”

In previous years, the cultural organization for Latinx students was a group called Adelante. At the end of the 2019-2020 school year, the heads of Adelante graduated, leaving the group without leadership, leading to the re-evaluation of Adelante and creation of LSU.

Juan Diaz ’ 22 and Rio Osorio Nava ’24, the co-chairs of LSU, have been working to create a safe space for Latinx students on Macalester’s campus, where they can access resources and create a community around their shared identity. During the 2021-2022 school year, LSU has hosted two events so far for Latinx students. When they tried to implement the plans for events they had been working on for October, they were unable to access funds.

Upon reaching out to the Department of Multicultural Life in fall 2021, Diaz and Osorio Nava discovered that events surrounding Hispanic Heritage Month were already in progress. Diaz said that he believes the miscommunication surrounding this may be due to the fact that LSU was not an officially chartered organization at the time.

“We were disappointed in hearing that we were not involved in that process,” Diaz said. “This very top to bottom approach has been pretty consistent across campus in terms of programming and events.”

Students have also found difficulty in promoting events once the resources to host them are obtained. According to Kimberly Tuxpan ’24, a Latinx student who attended some of the events LSU hosted, it is extremely difficult to see a lack of ways to advertise cultural events at Macalester when students have put a lot of work into them.

“There were mentions in the Mac Daily and on Instagram pages at best,” Tuxpan said of LSU’s gatherings. “It is very hard to communicate about these events.”

On Sept. 14, the Mac Daily released a list of events dedicated to Hispanic Heritage Month. There was an interchangeable use of the words “Hispanic” and “Latinx” to describe the dates of Sept. 15 through Oct. 15, which inadvertently highlights the difficulties of forming a collective Latinx identity on campus.

In some circumstances, the interchangeable use of terms within academia to describe Latinx Heritage Month, has caused some confusion within the community, who have a different perspective on the terms than their non-Latinx counterparts.

“The word Hispanic itself connects us to our colonization, our colonizers from Spain,” Osorio Nava said. “It just means you speak Spanish, so I choose to not identify as Hispanic. Even though I do speak Spanish I don’t [identify with it], it’s a colonizer language and I’ m not very proud of it — it was [forced] upon my ancestors.”

LSU advisor professor Ernesto Ortiz-Díaz emphasized that the purpose of events hosted by cultural organizations should be to embrace and take pride in their roots and culture, which can be difficult when the administration opens their events to the entire Macalester campus. He said that students should always be the leading forces when it comes to event creation, and that it should be up to them who gets to be included in that conversation.

“The most important thing is that every decision made regarding these events is made by the students,” Ortiz-Díaz said. “If they feel comfortable and if they feel that opening the event to the whole campus is going to serve the purpose of the event, then it is okay.”

Ortiz-Díaz said that as an institution, Macalester could be doing more to provide resources and tools to help Latinx and BIPOC students, particularly first generation students, to thrive in a new and much higher pressure environment. Though the Macalester website boasts 98 countries represented within the student body and 37% of students who identify as people of color, he feels the actual multicultural experience is lacking.

“You can attract many students of color … but then how are you going to retain them? That’s the biggest issue on campus,” Ortiz-Díaz said. “We need to create programs to mentor these Latinx students. That is not solved with just organizing these cultural events.”

Despite the college’s promises of multiculturalism, internationalism and diversity, Osorio Nava said that they feel as though the school is falling short.

“Macalester loves to brag in numbers of diversity,” Osorio Nava said. “But I definitely had a culture shock when I came here, because it’s super white. Before I committed to this school I got sold on these numbers … But definitely when I came to campus it didn’t seem that way and it still doesn’t.”

Diaz said that he has seen this lead to Latinx students relying on those within the staff they feel connected to and who they feel can relate to their lived experiences, which can be extremely draining on those faculty members.

“Unfortunately a lot of times this comes as an emotional toll to all,” Diaz said. “A lot of BIPOC professors [can be] an emotional resource for BIPOC students where we’ re releasing our stress and the various challenges and obstacles that we’re having in this PWI that they aren’t paid for.”

As a senior, Diaz has also taken on a mentorship role for many Latinx underclassmen, and is saddened to see them struggling to communicate their frustrations to white professors or other students. Ortiz-Díaz echoed this sentiment, stating that he has a lot of students that come to open up to him because they feel comfortable sharing their struggles with him due to their shared identity.

“We need to educate faculty to be sensitive to the needs of those students and be able to cater to those students,” Ortiz-Díaz said. “What are you doing for students who want to major in science or in a specific field and they come to the college with disadvantages because of the school district they come from?”

According to Osoria Nava, they feel like the institution can be very performative, and that POC students can feel pressured to “perform for the school” in order to fit the standard of multiculturalism that the college wants to display.