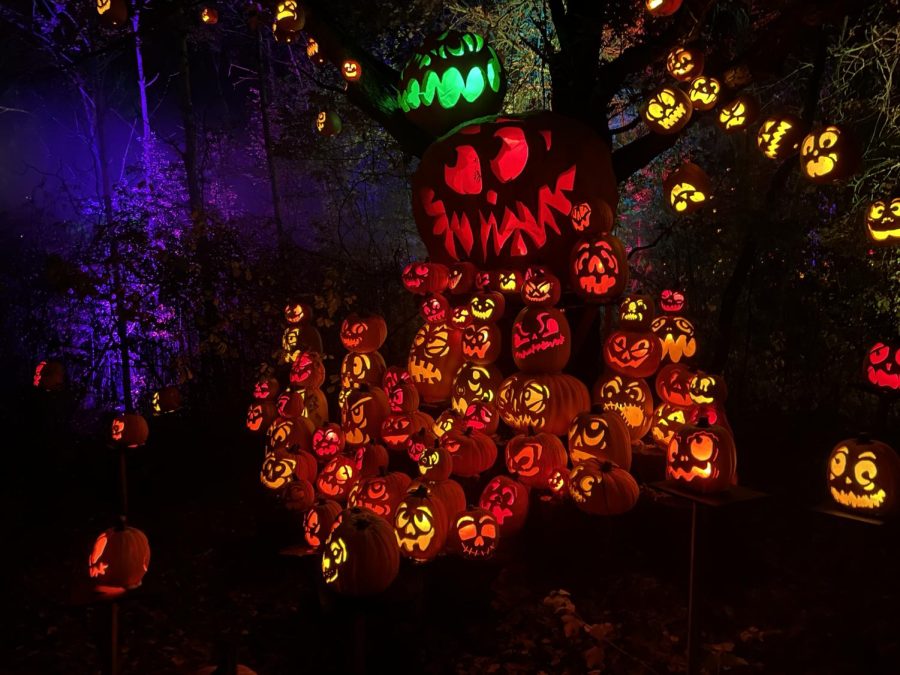 Upon entering the zoo, it was apparent that the event was going to be that of Halloween ambiance. The trees lining the walkway, as well as the year-round sculptures, were lit from their feet in rainbow colors. The misty air meshed with the lights to encompass the spooky season. A couple main zoo exhibits, like the tiger den, were open to walk through, but no animals were out in the nighttime.

“This seems like a good place for a tiger to ambush us,” a young man said to the child he was with.

After a long and winding walk, the jack-o-lanterns began, and it was not a subtle display. Jack-o-lanterns lined the walkway and spread out into the distance. They lined the trees overhead, sporting every emotion imaginable on their faces. These “opener” pumpkins had two values: the completely carved out features that light shined through and the untouched outer skin.

The pumpkins come from the company Passion for Pumpkins, based in Oxford Mass., who works to create illuminated jack-o-lantern shows around the United States. They claim to partner with great pumpkin-carving artists specifically to put on these displays. Passion for Pumpkins has run shows at Fenway Park in Mass. and at Rodger Williams Park Zoo in Kentucky.

At the Minnesota Zoo, 11 separate jack-o-lanterns messaging “Pumpkins A to Z” signaled the beginning of the main show. Each letter of the alphabet had its own theme or tribute and pumpkins which accompanied that theme.

The large jack-o-lanterns featured in the exhibit were detailed works of art. The styles varied from bold line work to life-like shading on faces. Each pumpkin played with light in its own way. One pumpkin featuring a geometric pattern intertwined with a chameleon was a light-on-black style. A pumpkin with Martha Stewart and Snoop Dogg carved onto it was completely lit. However, where the skin was thicker the value was darker.

Representing the letter “A” was “Alice in Wonderland.” The pumpkins detailed shaded images made from light, from the Mad Hatter to the Queen of Hearts. Then, for “B,” Birds and the Bees. A song that went “the birds and the bees are flying in the trees” played on repeat and adults snickered.

“H” was for Halloween, of course, and “I” was for impressionist. At “K,” for Kingdom, Game of Thrones’ iconic theme song played. Someone in the crowd hummed along. A jack-o-lantern showing scenes from “Where the Wild Things Are” represented “N” for Novels.

The larger, more detailed pumpkins were surrounded by thousands of classically styled jack-o-lanterns, with eyes, a nose and a mouth. But even with thousands of others to compete with, the basic jack-o-lanterns stayed unique. A crowd favorite seemed to be a pumpkin with dollar signs for eyes.

The Jack-O-Lantern spectacular was a good holiday activity both for whole families and solo college juniors. Children, adults and everyone in between seemed to be impressed judging by the “oos” and “ahhs” coming from their mouths. Well, almost everybody.

“Alright, I’m free till Christmas,” a teenager said to his mom. “I don’t have to do anything else until then.”