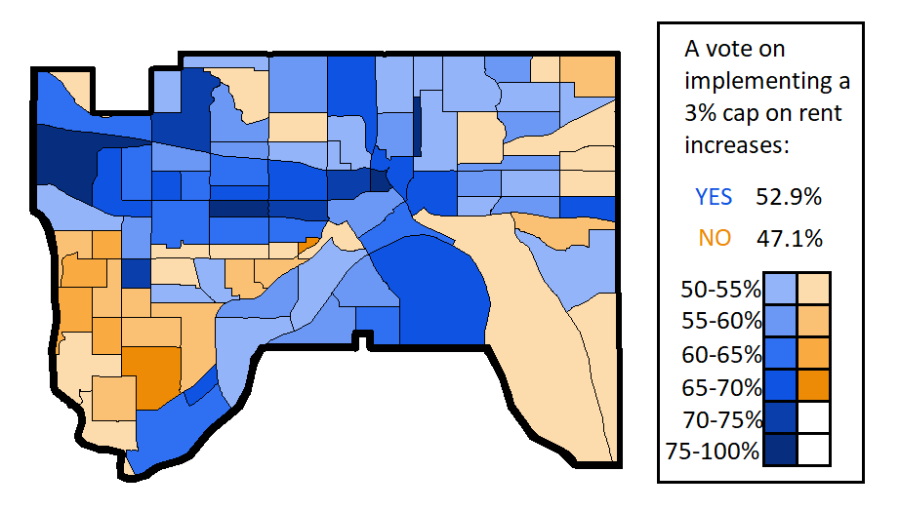 Voters in St. Paul approved the strictest rent stabilization measure in the country, and the first in the Midwest. Nearly 53% of voters voted for the measure. Starting immediately, landlords cannot raise the rent on their properties more than 3% in one year.

The measure had widespread appeal, losing only in Ward 3, which encompasses the Macalester-Groveland and Highland Park neighborhoods.

The vote came after a heated months-long campaign led by the organization Housing Equity Now St. Paul. Several Macalester students worked on the campaign. Advocates hope the policy will make renting in the city more affordable. Critics of the measure say it goes too far, with its strict rent cap and its lack of exemptions for new properties.

Mayor Melvin Carter gave the measure a hesitant endorsement, saying on Twitter that he would vote for the policy “not because the policy is flawless as drafted — we can and must make it better, quickly — but because it’s a start.”

As expected, Mayor Melvin Carter won his reelection with about 63% of the vote. Carter, who has served in this position since 2018, did not see any major challengers in this year’s race.

Carter’s challengers lagged far behind, with Dino Guerin coming in second with about 13% of the vote. Guerin, and several other challengers, ran on platforms advocating stronger city support for policing. Public safety was in the spotlight in both the St. Paul and Minneapolis mayoral races.

Carter’s stance on public safety calls for reform of police policies and practices. In a virtual meeting hosted at Macalester last spring, Carter stressed a holistic approach to public safety, stating that “the most impactful thing that we’ve done on public safety has been raising the minimum wage.”
Minneapolis
Question one: Strong mayor question

Minneapolis’s first ballot question, which passed narrowly with 52% approval, will shift certain responsibilities from the city council to the mayor. Powers including appointing and removing department heads will now lie with the mayor instead of the council.

Supporters of the amendment claim that the previous distribution of power led to inefficiency. Critics, however, claim that the council better represents a diversity of perspectives in Minneapolis, as it draws representatives from different districts. An opinion in the Star Tribune called the measure “a campaign backed by wealthy interests and wealthy neighborhoods [pushing] for a single decision maker as a silver-bullet solution to all problems.”

The passing of this question is another win for mayoral leadership in Minneapolis, further consolidating power within the mayor’s office.

Minneapolis voters rejected the second ballot question, an amendment that asked if the city should replace the police department with a public safety department.

The measure failed with 44% of Minneapolis voting in support and 56% voting against.

If passed, the Minneapolis charter would have been amended to remove the requirement for a police department and “eliminate a minimum staffing requirement for officers,” allowing the city to establish an office of public safety in place of the police.

This was a major vote in the wake of ongoing police violence in the Twin Cities, and across the country, against Black and Brown people. The measure’s failure to pass signals the ongoing division in the city over the future of public safety.

There was national attention on this measure in the wake of the racial justice movements over the last year and a half. News outlets such as NPR, The Washington Post and the New York Times all reported on the vote.

Even though the measure failed, it overcame barriers to get on the ballot in the first place.

Voters in Minneapolis passed a ballot question on rent control, with 53% voting in favor.

Although the measure to amend the charter passed, a rent control policy could face some obstacles. Mayor Jacob Frey said he would vote for the charter amendment, but has not committed to supporting any concrete policies the city council creates.

In Minneapolis, incumbent Mayor Jacob Frey won reelection, defeating a progressive coalition of politicians and organizers that pushed to oust him from office.

Frey has been a target of criticism over the last year and a half for his management of Minnesota’s police brutality and the Black Lives Matter protests that swelled last year after Minneapolis police murdered George Floyd.

Organizers in this election leaned on Minneapolis’s ranked choice voting system to elect a more progressive mayor — Frey’s top challengers were community organizer Sheila Nezhad and former state representative Kate Knuth. Knuth and Nezhad urged their supporters to rank each other first and second on their ballots, and to leave Frey off altogether, in the hopes that one of them would rack up enough first- and second-choice rankings to edge out Frey.

Frey won about 43% of the first-choice vote; after calculating the ranked choice votes, he came in with 56% of the vote, 12 points above Knuth.