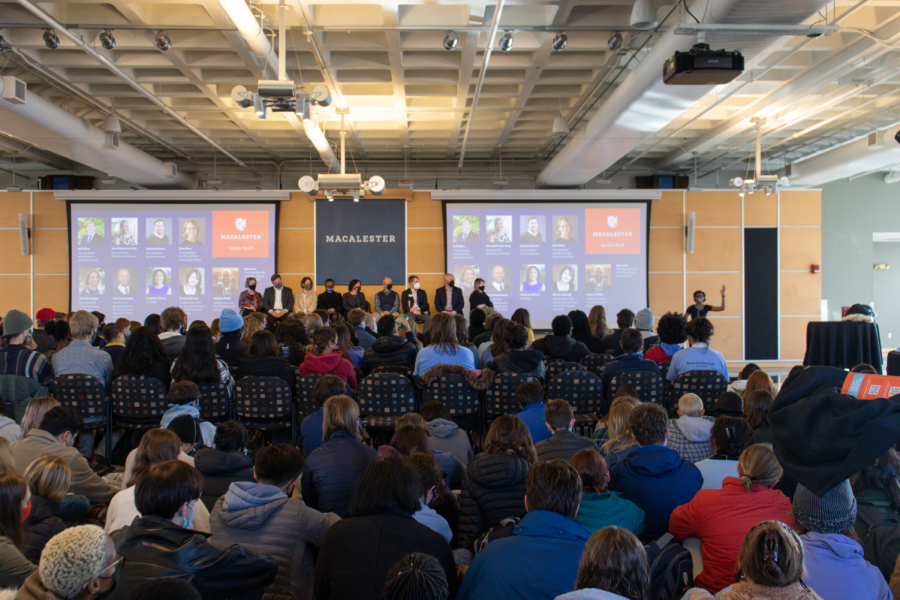 On Wednesday, Nov. 3 at 9:30 a.m., several hundred students, faculty and staff arrived in the Kagin ballroom in protest of the Macalester administration’s treatment of BIPOC and international students on campus, the administration’s lack of accessibility and racist incidents at Macalester.

Rayan Abubaker Ahmed Hamid ’22, who organized much of the student attendance at the event, opened by sharing her personal experiences at Macalester and in her home country of Sudan during her past four years here. She described the lack of response from Macalester administrators, particularly Macalester President Suzanne Rivera.

“I’ve been emailing President Rivera from the 27th of August,” Rayan said. “I said, ‘Subject line: urgent. Do you have 15 minutes to meet? … I am broke and my visa is about to expire. I have an autoimmune disease that I still don’t know what it is and I am an international student.”

Rayan shared the constant fear she feels for her family, who lives in Sudan, in the wake of the military coup in Sudan last week. She said that she had tried to reserve a room and organize a fundraiser on campus to support Sudanese protesters, but she said Macalester told her it was too political and the school needed two weeks’ notice. She also put a poster up in support of Yemen, which was also taken down after two weeks even as posters advertising events such as slam poetry stayed up longer.

After her fundraiser was shut down, Rayan reached out to sustainability officer Kashvi Ajitsaria ’22 to share her concerns with the Macalester College Student Government (MCSG).

She spoke bluntly about white supremacy at Macalester and the school’s lack of institutional support for non-white students.

Hamid emphasized that this forum was not only about her, but about all international, BIPOC, low-income and marginalized students at Macalester.

“This is not just about me, but this is the only way people can get to know that there are real issues on this campus,” she said. “Because I should not have to stand here. I’m talking about life-threatening, traumatizing things to get you to recognize that this is not okay.”

Rayan added that there are other international students who share similar fears about their families’ and loved ones’ lives. She also criticized U.S. democracy, its human rights violations and systemic white supremacy, and especially the role the U.S. has played in the violence in her home country.

At around 10:45 a.m., Provost Lisa Anderson-Levy told her and the crowd that several senior staff had meetings that could not be rescheduled. Rayan responded, telling senior staff that if she and students, faculty and staff in attendance were going to miss their classes and meetings, so should senior staff.

“You said you all have meetings,” Rayan said in response. “I’m sure a lot of people here have a meeting. If we can skip it, you can skip it too … We will all sit here and wait for you to come back from a meeting.”

Several senior staff and Anderson-Levy still left the ballroom, while others, including Rivera, stayed for the duration of the meeting.

After almost an hour of speaking Rayan left the front of the room, and students and staff sitting in the audience began to walk to the microphones to share their own stories, trauma and anger.

Students and staff expanded upon themes of racism and racist incidents at Macalester, speaking to the academic pressures, financial struggles and lack of institutional support for international and BIPOC students. Students broadened the conversation further to issues of sexual violence and Title IX, ableism and a lack of accomodations and a lack of transparency from the institution around financial decisions and leadership processes..

“We are tired,” one student said. “I have never been this fatigued in my life.”

Niara Williams ’18, an assistant director in the admissions office, spoke about one student’s interpretation that Rayan’s speech was dehumanizing. She asked the senior staff in the room who felt dehumanized to raise their hands. No one raised their hands.

“I find it highly, highly, highly disturbing that the last hour and a half of conversation that we heard was interpreted as violence, as dehumanizing, as placing these people as subhuman, and that is part of the reason so many students of marginalized groups feel uncomfortable speaking up,” Williams said. “There are so many people on this campus that interpret difficult conversations as a level of adversity on the same level as racial violence.”

At times Rivera, interim Dean of Students Andrew Wells and Anderson-Levy interjected their reactions and responded to student questions. One student asked senior staff how they are working to give students, especially BIPOC students, “a fucking break.” In response, Rivera outlined several new policies and committees she believes are working to give students more support. She described the Financial Barriers Working Group she commissioned last year and the fundraising she did to create a pot of money for students who experience unexpected expenses.

Some students did not feel that the administration responded appropriately.

“I sense a lot of defensiveness from all five of you on stage, and I get that it’s human, but put it away,” Teddy Holt ’22 said. “This is not the time to indulge in feelings of defensiveness about what you’re doing.”

In response, after four and a half hours on stage, Rivera said she would sit in a chair near the stage and students could come chat with her. Other senior staff including Anderson-Levy, who returned after leaving to attend meetings, Wells and Vice Provost, Special Advisor to the President and Director of COVID-19 Operations Paul Overvoorde also moved off the stage to talk with students.

Katie McCarthy ’22 asked senior staff to order lunch for the students remaining in Kagin at 2:00 p.m., since Cafe Mac had closed for the afternoon. Rivera and Wells organized pizza, salad bowls and sandwiches to be delivered to Kagin.

After the event, The Mac Weekly reached out to several senior staff asking for a comment on today’s events and any action steps the administration will be taking in the coming days and weeks. Their responses will be shared in a forthcoming article.

“I really admire the people who had the courage to step forward today and speak their truths,” Rivera wrote in an email to The Mac Weekly. “We all need to be willing to hear hard things, and sit with the discomfort of knowing we have difficult and important work ahead to make this the kind of community we say we want to be. I am committed to do that work.”

Wednesday evening, Rivera and Anderson-Levy sent an email to the Macalester community in response to the five-hour student sit-in. They outlined seven steps that will be taken within 24 hours of Wednesday evening. Rivera and Anderson-Levy asked the Educational Policy and Governance Committee (EPAG) to consider adding a wellness day this semester, encourage faculty to reduce student workload and stress in various ways and plan more town-hall style events to continue the conversation that started today.

Estelle Timar-Wilcox, Maya Sobchuk and Ben Porter contributed to the reporting for this story.

The Mac Weekly will continue to report on this story in our future print and online editions.