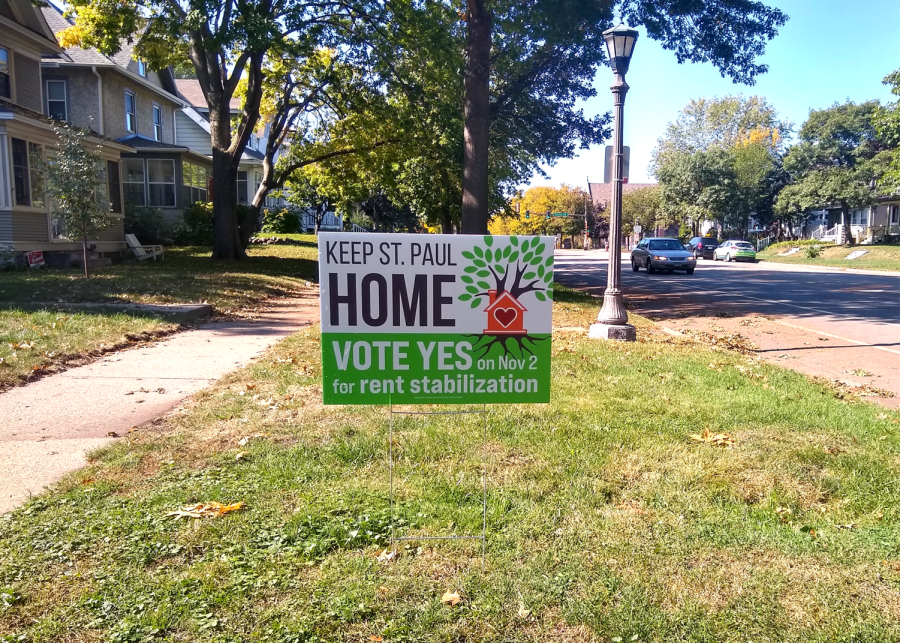 It’s official: the Twin Cities are home to the worst housing shortage in the nation. Housing prices have skyrocketed, rent continues to go up, homelessness is high and all of this in spite of massive property development in the region. To be precise, the phrase housing shortage is a bit of a misnomer: housing exists, it’s just not accessible. As rent prices shoot up, working people are getting pushed out of the communities they’ve made home. In their wake, developers are sweeping in, snatching up land and redeveloping it, leaving brand new shiny housing that’s far too expensive for those who are already here. Rents can’t keep up with the bloated property values, displacing even more people. This is gentrification. Hundreds of people, mostly working-class non-white folks, are fleeing from the cities while white urban professionals move in. This, then, is really less of a housing shortage than it is a housing crisis and a severe one at that.

So in the wake of that sobering news, what can we do? We can’t solve this disaster overnight and there is no universal solution, but next week, St. Paul residents really do have an opportunity to deal the perpetrators of this crisis a blow and slow down displacement. We can vote for rent stabilization. Over the last nine months, Housing Equity Now St. Paul (HENS), a coalition of housing organizers in St. Paul, have worked feverishly to design a policy that, if implemented, would cap annual rent increases at just 3%. Full disclosure here, I’ve spent a great deal of time volunteering with them. In the spring, HENS gathered over 9,100 signatures to get it on the municipal election ballot, and now, in the fall, they’ve knocked on thousands more doors to get people out to vote yes. Hopefully, you will too.

This policy is simple and expansive. If passed, it will be the most stringent rent control policy implemented in the U.S. for decades. While strong and necessary, the policy is not too extreme. Right now, rent increases every year actually average out to 3%, but when that number is disaggregated to minority and poorer communities, such as the Midway, Frogtown and the East Side, rent increases often exceed 10% and sometimes even 15% or 20% a year. ISAIAH, a Twin Cities-based faith nonprofit, told the story of one renter experiencing a 34% increase this year. As wages flatline, it’s clear that working people simply can’t afford that. The perpetrators of these outrageous hikes are huge corporate landlords, predators that, oftentimes, aren’t even based in Minnesota. The policy would force these profit-guzzlers down to that 3% ceiling, which is generally in line with tenants’ wages and rising property taxes. It says quite a lot that a policy that sticks to the average is considered radical, but that is the reality of the housing crisis and the discourse that surrounds it.

Those who oppose rent stabilization complain that the passage of this policy won’t create new housing. Obviously, it won’t, but that’s not the point. Rent stabilization is singularly focused on ending the displacement that scourges St. Paul, which is the first problem that needs to be addressed. It will keep people in their homes for longer and keep rents lower in the long run. It will dissuade new development by keeping people in their homes, it will prevent developers from swooping in and gentrifying working-class neighborhoods, thus stopping the ever-expanding wave of luxury condos from eating this city alive. Some opponents go even further and say that this policy will cause the complete collapse of the housing market. I have to call bullshit: I heard the same people making the same argument about extending the eviction moratorium. The last I checked, development continues nationwide and cities continue to grow.

When I’ve talked to voters about their thoughts on rent stabilization, nearly everyone, homeowners and renters both, agreed: rents are too high. Displacement is a huge problem. And any tool that would keep housing accessible for the most vulnerable is a common-sense thing to adopt. The opposition’s arguments that this policy is an out-of-touch, uninformed item on a wishlist of armchair activists doesn’t hold water; they are the ones miserably unaware of the needs and desires of this city’s renters.

St. Paul is a renter-majority city and nearly all of those renters live in housing that’s at risk of rent hikes and displacement. All of us, whether we, ourselves, are St. Paul renters or not, have an obligation to engage with the broader community that we too are members of. We owe it to them to fight displacement in any way we can and this is one way. We actually have an opportunity right now, unencumbered by politicians and the system that sustains them, to use our collective power to keep St. Paul home. This Tuesday, Nov. 2, vote yes for rent stabilization.