Autumnal book recommendations for all readers ​​ 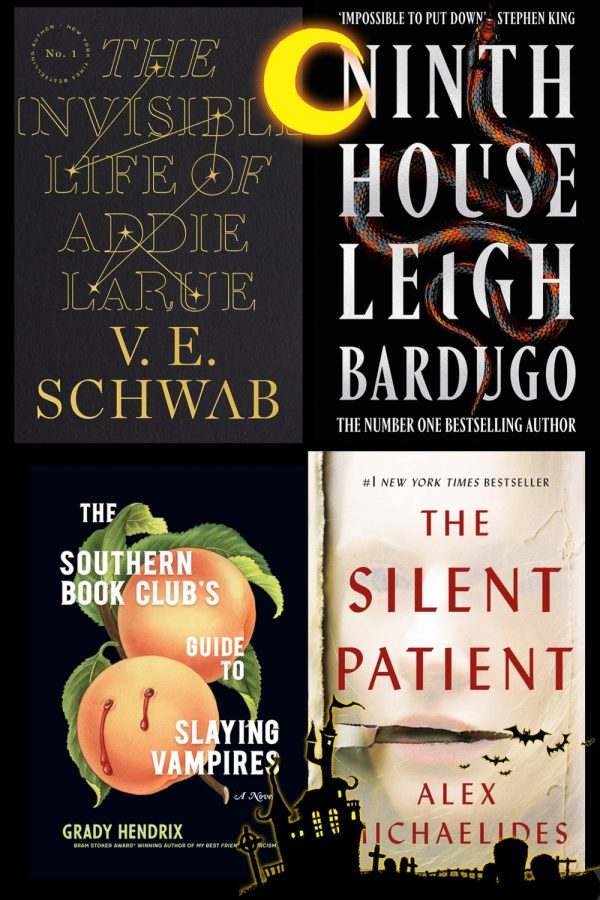 Want the perfect book to curl up with on one of these Minnesota fall nights? Whether you’re looking for a spooky Halloween thriller or an atmospheric cozy read, you’ve come to the right place. I spent a good part of quarantine escaping our dystopian reality in lots — and lots — of books, and I’ve put together four of my favorites that I think would be perfect to read this October and November.

In this supernatural thriller, Patricia Campbell is just another unsuspecting housewife in the wealthy neighborhood of Mt. Pleasant, S. C. Her life is a boring blur of her whiny children, her distant husband and her true crime book club. Then James Harris waltzes into town, impressing all of Mt. Pleasant’s husbands and flirting with all its wives before anyone can realize his charm may be covering something, perhaps, deadly. Children are going missing and it’s a good thing Patricia and the other members of her book club have read so much true crime because their new neighbor is turning out to be frighteningly similar to the serial killers of their novels.

When Mt. Pleasant’s picturesque community brushes off their suspicions as nothing, it’s up to the book club to figure out how to deal with James — who, quite possibly, is a vampire. I originally picked up “The Southern Book Club’s Guide to Slaying Vampires” because I happen to love vampires — so by the time I realized this book was actually a horror novel, I was too deep in to put it down. There are some seriously disturbing scenes featuring rats and cockroaches, and the supernatural element is terrifyingly in touch with reality. Hendrix develops the housewives so flawlessly that it creates a grotesque Southern atmosphere that is, somehow, still endearing.

Alicia Berenson is an artist living the perfect life in contemporary North London — that is, until her husband gets home from work one night and she shoots him five times in the head. After the murder, she never speaks another word. Alicia’s case dominates the news, the price of her art skyrockets and no one can figure out why someone so in love would snap, just like that. Psychotherapist Theo Faber is fascinated by Alicia, so when he gets the opportunity to become her therapist where she is secluded at a forensic unit, he doesn’t hesitate to take it. The more Theo gets to know Alicia, the more personal he begins to consider her circumstances, and the more paranoid he gets in his own life. He has a mysterious, unstable history of his own and his growing obsession over Alicia, his silent patient, is beginning to smudge the boundaries of a psychotherapist. “The Silent Patient” starts out relatively straight-forward, but then Michalides twists Theo’s narrative so subtly you don’t even realize what is happening until it’s already happened. This psychological thriller and mystery is sure to leave you shocked in the end.

“Ninth House” is the #1 New York Times bestselling author Leigh Bardugo’s first adult novel. It’s a spooky, dark academia mystery following Galaxy “Alex” Stern, a high school dropout who at age twenty, after being the sole survivor of a multiple homicide, gets the most unlikely invitation to attend Yale University on a full scholarship. The caveat, however, is that she must monitor the activities of the university’s secret societies. The eight houses are associated with the future wealthy and successful, leaving Alex to wonder why she of all people was offered this opportunity — until, of course, she discovers the occult undertones of each society. Intertwining narratives of past and present create a supernatural and very, very dark mystery with Alex — and a ghost or two — at the center of it. “Ninth House” is a bit slower-paced but no less intriguing. I’m a huge fan of Bardugo’s Grishaverse books, so I wasn’t surprised by how captivating her new set of complex, incredibly real characters were. And good news: Bardugo is currently working on both “Ninth House”’s sequel and TV adaptation. There are some major trigger warnings here, though: violence, rape and sexual assult, murder, gore, drug addiction and suicide, so this book may not be for everyone.

It’s 1714, and it’s a young woman named Addie LaRue’s wedding day. Willing to do anything to be free from her future husband and claustrophobic life in Villon, France, Addie makes a Faustian bargain with the shadows, the not-quite-god of after-dark, to escape: she will live forever, but every person she meets will forget her as soon as they turn away. It is the absolute freedom she asked for, after all. So begins the exceptional life of Addie LaRue, a story that covers centuries and countries and wars and loves as Addie tests the limits of her curse finding new ways each year in which she can leave her mark on the world. Addie’s narrative pauses in a bookstore in 2013 New York City, when she meets Henry, the boy who is opposite of the shadows she has had for company for centuries, and who will change everything. “The Invisible Life of Addie LaRue” is told in exceptional poetic prose, with the fascinating, ever-growing character Addie at its core. Though this book isn’t a spooky thriller, it has an incredibly atmospheric, cozy throughline — and also, I’ll recommend this book to anyone who will listen, no matter the season. It’s a great book to end on; V.E. Schwab will not disappoint with this powerful, historical piece.