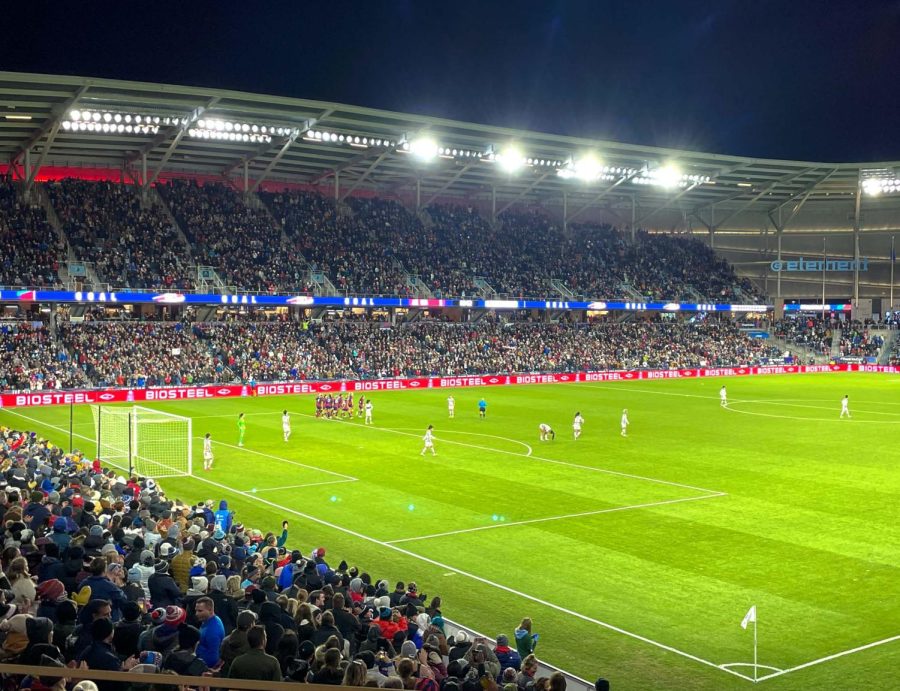 Please be advised, this article contains discussions of sexual harassment and misconduct and verbal and emotional abuse.

Carli Lloyd’s last game for the United States women’s national soccer team (USWNT) capped off a career which set her firmly in the record books. On Oct. 26, Lloyd captained the team in a 6-0 win over South Korea at Allianz Field in St. Paul, Minn. to end a four-game friendly series this fall. Lloyd began her work with the senior USWNT in 2005 and over the course of her 17-year career won two FIFA Women’s World Cup (WWC) trophies, earned a gold medal at the 2008 and 2012 Olympics and a bronze medal in Tokyo this summer. She also became the second-most capped player in world soccer (both men’s and women’s) with 316 caps, or games played, as of Tuesday night.

Lloyd, however, is not the only older star on the team. There are several USWNT stars who are closing in on retirement age — usually between 35-45 for a soccer player. They include Megan Rapinoe, the subject of an iconic mural at Black Hart of St. Paul, Ali Krieger, Ashlyn Harris and Becky Saurbrunn. Both Rapinoe and Saurbrunn joined Lloyd on the roster for the Korea games while Harris and Krieger were not called up. All of these women, though, were on the FIFA WWC-winning 2019 team.

Despite the aging stars, the USWNT’s future is bright. There are several young players such as Catarina Macario, Emily Fox — the number one draft pick in the National Women’s Soccer League (NWSL) last year — and Lynn Williams who are already making waves at the club and international levels. Williams, for instance, already has 13 international goals and won the NWSL championship with the North Carolina Courage in 2019. Macario currently plays for Olympique Lyonnais Féminin in France — one of the most dominant teams in professional soccer — and scored in her second game with the USWNT.

Although Lloyd started the game, she left in the 66th minute after a planned substitution with Alex Morgan. As Lloyd walked off the field for the last time, she was greeted with a several-minute long standing ovation by the adoring crowd at Allianz. She took off her jersey to reveal another jersey underneath with the name Hollins on the back, the name she uses outside of her soccer career. Then she passed the captain’s armband to Rapinoe and walked off.

While she played, and more significantly after Lloyd’s departure from the field, the young stars of the team made their presence known. Mallory Pugh and Sophia Smith started the game up front and Macario in the miwddle. These three paced the team’s first half, and in the ninth minute, Smith snuck a pass to Lindsey Horan who shot, and after deflecting off a Korean defender, scored the U.S.’s first goal of the night. More importantly, Smith, Pugh and Macario connected for several passes to bring the ball up the field, contributing to the USWNT’s 82% pass accuracy during the game.

The USWNT, despite several chances from Lloyd, Pugh and Macario did not score again until the 45th minute when a pass deflected off Cho So-hyun on the South Korean team and landed in the net to give the U.S. a 2-0 lead to end the first half.

After a halftime light show, both teams returned to the pitch. Though in both the first and second half Lloyd took several shots, she was unable to score. Her sub, Morgan, scored in the 69th minute off a Rapinoe pass, just three minutes after the change to increase the U.S. lead, 3-0.

The Americans controlled the game, but their flurry of goals did not come until the last 15 minutes. Rapinoe started the scoring run with a one-touch shot off an Emily Sonnett pass which slid in just under the crossbar.

The fans seemed to be waiting for a Rapinoe goal, and the stadium roared to life with chants of “Rapinoe.” The USWNT was not done, though. Just four minutes later Rose Lavelle snagged a pass from Morgan, dribbled through the defense, and shot a low ball to give the U.S. a 5-0 lead in the 89th minute.

The referees added three minutes of extra time, and that was just enough for Williams to use her signature speed and ball handling skills to score the team’s sixth goal in the 92nd minute.

The 6-0 win was a stark contrast to the U.S. and Korea match on Oct. 21 which ended in a 0-0 draw. Despite the U.S. controlling possession and passing in the Oct. 21 game, the team could not convert their dominance to a goal. Tuesday night, with six goals over the game, demonstrated a different side of the team.

At the end of the game, announcers asked fans to remain in their seats for a special presentation honoring Lloyd. The presentation featured a message from her husband Brian Hollins, a montage of her most iconic goals, and a speech from Lloyd herself. Lloyd thanked fans — including her critics and doubters, teammates, coaches, staff and her family.

“I am signing off,” Lloyd said from center field. “You will not see me on the field, but you best believe that I will be around helping the team grow.”

The speech was followed by several more minutes of cheering from the stadium and the USWNT. Afterward, the team made their circle around the field, and Lloyd made her own, pausing throughout to take photos, sign memorabilia and chat with fans.

Beyond Lloyd’s retirement, the USWNT — and women’s soccer more broadly — is reckoning with revelations from The Athletic and the Washington Post of coaching abuse, sexual harassment and coercion and racism in the NWSL. Over the weekend, the members of the Canadian women’s national team called on their governing body, Canada Soccer, to denounce the rampant culture of abuse in women’s soccer. In addition to the NWSL reports,  former coach of the Canadian U-20 women’s team Bob Biranda is facing sexual misconduct charges.

Ultimately, players say, this is an institutional failure. When coaches such as Biranda and Paul Riley abuse their authority over women’s soccer players, the players have nowhere to turn besides the same organization or club allowing the abuse to continue. As former Irish women’s soccer player Ciara McCormack wrote in The Guardian, “without a safe space in soccer to report abuse, countless players have left the game amidst abusive situations.”

Several players have left the NWSL in the past few years as a result of abuse and a lack of accountability. Kaiya McCullough and three other players left the Washington Spirit, an NWSL team, during the past two years as a result of then-coach Richie Burke’s emotional and verbal abuse. Others like Mana Shim and Sinead Farrelly quietly exited the soccer world after their head coach Paul Riley sexually harassed, abused and coerced them. Riley continued to coach until earlier this month when Shim and Farrelly’s allegations were published in The Athletic.

There is a close relationship between the NWSL and the USWNT. After the allegations were reported, U.S. Soccer, the national governing body, launched an investigation into the misconduct. Many USWNT players, including Morgan and Rapinoe, voiced their frustration and sadness at the league’s inaction. USWNT head coach Vlatko Andonovski said he was “saddened and disgusted” by the allegations.

According to Morgan, the precariousness of women’s sports compounds the difficulties in reporting abuse and misconduct.

“The NWSL is kind of the last hope for a women’s soccer league,” Morgan said in an interview with The Athletic. “Because of that, I feel like there’s this idea that we should be grateful for what we have and we shouldn’t raise important questions — or ask questions at all.”

As a result of this, Shim, Farrelly and McCullough felt silenced. The issues they raised with coaches Riley and Burke, respectively, were swept under the rug by the clubs these men coached at.

In the wake of The Athletic’s article, the NWSL Players Association (NWSLPA) released an eight-point statement demanding change, the NWSL commissioner Lisa Baird resigned and women’s soccer landed on the front page of several national newspapers like the New York Times. Riley resigned from his coaching position with the North Carolina Courage. The NWSLPA also established an anonymous reporting hotline through Lighthouse Inc.

“The purpose of this service is to ensure that any player wishing to submit a report can do so anonymously and without fear of retaliation.” the association’s statement said.

The NWSL is still figuring out how to regain players’ and fans’ trust and end the systemic abuse in the organization.

Though many national team players continue to share their thoughts about the issues in the NWSL and women’s soccer broadly, the focus on Tuesday was on Lloyd and her retirement. Recent NWSL and Canadian women’s national team games have been punctuated by unifying actions such as teams linking arms at half field during the sixth minute of the game to signify the six years Farrelly and Shim’s reports went uninvestigated. However, this game did not feature any show of unity.

Several USWNT players including Morgan and Rapinoe are involved in and leading the NWSLPA and talks with the league. Lloyd, for her part, acknowledged the importance of changing the culture of the league during her final homecoming game in New Jersey with the Gotham FC.

“This is a huge wake up call,” Lloyd said after her homecoming game in early October.

Lloyd plans to continue to support the growth of women’s soccer and the USWNT after retirement. The flood of press coverage about her final game — and her star power and privilege — grants her an opportunity to push for change in these spaces to protect survivors and younger players.