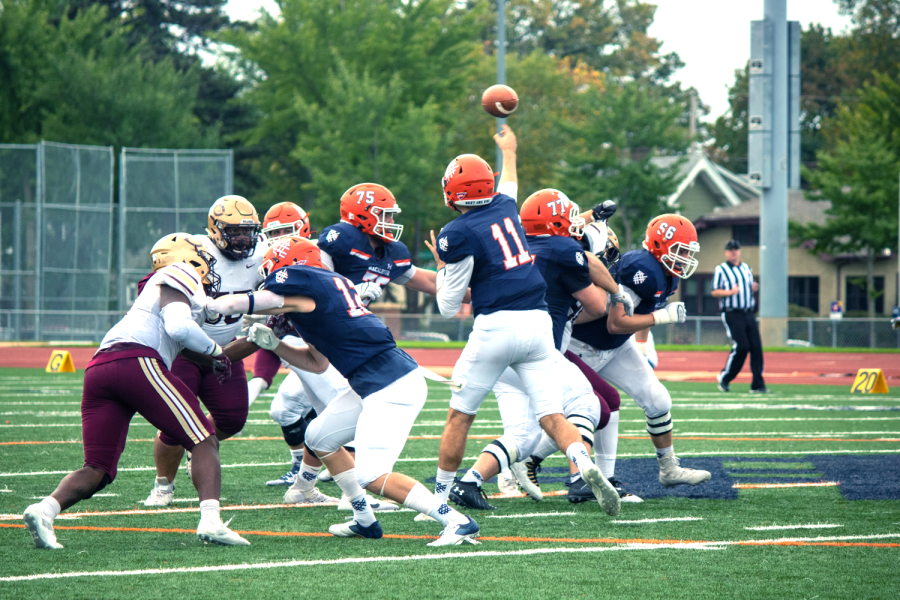 Just an hour after President Suzanne Rivera’s inauguration on Saturday, Oct. 9, the Macalester football team lost their homecoming game against Concordia College (Minn.), 34-27. Despite going into the second half with a 10-10 tie against the Cobbers, the Scots could not stop their rushers or receivers, and fell to 27-10 by the end of the third quarter. Macalester scored two more touchdowns and a field goal to finish the game with 27 points. Their rally was too late, and they lost 34-27.

This is Macalester’s first year back in the Minnesota Intercollegiate Athletic Conference (MIAC) after a 20-year hiatus. Though Macalester is a founding member of the MIAC, over 15 years of losing records led to Macalester leaving the MIAC to be an independent program. In 2014, they joined the Midwest Conference where they played until 2020.

Macalester and the College of St. Scholastica both joined the MIAC this year after St. Thomas University departed to play in the NCAA Division I Summit League. The shake-up in MIAC schools coincided with a change in conference play. Starting this year, MIAC football is split into two divisions — the Skyline and the Northwoods. At the end of the season, the top-seeded team from each division play each other to determine who qualifies for the NCAA tournament. Macalester plays in the Skyline division; their matchup this weekend against Concordia was their first division game this year.

Coming into the Concordia game, Macalester was coming off a three-game losing streak against Trinity College (Texas), Carleton College and St. Olaf College. Despite the string of losses, Macalester started the season with a big win over the University of Minnesota-Morris which displayed the strengths of the team.

Against Morris, the Scots came from a one touchdown deficit in the first quarter to score three touchdowns before the end of the half. Two of those came from quarterback Michael Nadeau ’24 passes to wide receiver Rex Desso ’22. Desso and Nadeau have connected for a touchdown in three of their five games this season. Their combination, along with Nadeau and tight end Nick Bice ’24, have led to six of the team’s twelve touchdowns this season.

The Scots edged Morris 38-32 after a 88-yard kickoff return by running back Josh Bulski ’25 at the end of the fourth quarter.

Discounting the lopsided Trinity game, Macalester has been able to hang within a touchdown of their opponents through the first half. The third quarter, however, seems to be a slump point for them. St. Olaf, for example, was able to score three times — two touchdowns and one safety — in the third quarter to increase their lead by 16 points. Similarly, in this weekend’s contest, the Cobbers scored 10 points in the third and added another seven in the first 10 seconds of the fourth quarter to pull ahead 27-10.

The Scots have also worked on their running game this season, scoring five rushing touchdowns over the past five games. Running backs Kian Sohrabi ’22, Kai Akimoto ’22 and Logan Pampel ’24 have led the Scots in yardage this season. Sohrabi and Pampel have scored three touchdowns combined, and Akimoto leads the offense with 159 yards over the past five games. Akimoto and Sohrabi also led the rushing game in 2019 with a combined 755 yards over the course of the season.

On Saturday, Concordia came out of the gate strong, scoring their first touchdown after just under four minutes of play. Macalester, however, did not let the Cobbers momentum continue during the quarter as each team worked to move the ball up the field. Neither was able to gain more points, despite a five-and-a-half minute drive from Macalester.

That drive, with impressive rushing from Akimoto and a strong 10-yard pass from Nadeau to wide receiver Peter Vitalis ’22, pushed Macalester into the second quarter. The Scots tallied their first touchdown after just over four minutes of play.

Nadeau connected to Desso twice during their touchdown drive. Nadeau first threw for an 18-yard first down and sent a strong, 56-yard pass to Desso who ran for a Scot touchdown. Kicker Jon Neve’s ’22 extra point attempt was good and secured a 7-7 tie with the Cobbers.

Concordia came roaring back with an almost four minute drive to Macalester’s 32-yard line. The Cobbers could not break through the Scot’s defensive team, particularly defensive back Pierce Lundt ’22 and linebacker Noah Bresson ’24. Lundt and Bresson combined for 24 tackles on the day, each with 12, to lead the team. Concordia pulled ahead with a 38-yard field goal to lead 10-7.

Not to be outdone, Macalester raced down the field with forty seconds left on the game clock. After two Concordia penalties, and a 29-yard pass from Nadeau, Neve kicked a 28-yard field goal to level the score 10-10 and close the first half.

Macalester would not pull into the lead, though. In the third quarter, Concordia scored a touchdown and a field goal to lead 20-10 into the fourth. Despite strong defensive performances from Lundt and linebacker Victor Wright ’23, Macalester could not find its stride. Even the Nadeau-Desso connection fell prey to a fumble after an electrifying 44-yard pass at the end of the quarter.

The fourth quarter started much the same for the Scots. Concordia scored a touchdown in just nine seconds to extend their lead 27-10. Macalester, however, was not out of the fight yet. The Scots stormed down the field with two passes to Desso and one to Sohrabi, ending on the Cobbers’ 15-yard line. From there, Nadeau threw a quick pass to Bice for the touchdown. Neve scored the extra point, and Macalester shortened the Cobbers lead, 17-27.

The back and forth continued as Concordia scored another touchdown to make it 34-17 in just two-and-a-half minutes. Macalester did not let the Cobbers rush go unanswered. Neve scored a field goal from 33-yards after two stellar throws from Nadeau to Bice and Desso, respectively. This shortened the Cobbers’ lead to just 14 points.

Even with just 3:34 left on the clock at the start of their next possession, the Scots continued to push for those two touchdowns. Nadeau threw a 41-yard zinger to Vitalis and a Concordia penalty pushed Macalester into the red, just two yards outside the endzone. Nadeau and Pampel both rushed for a yard respectively with Pampel crossing into the endzone for a Macalester touchdown. Neve scored the extra point and Macalester sat in spitting distance of a tie, maybe even a win.

The Cobbers final rush, however, ran down the clock, and the Scots lost 34-27.

Though they lost, the Concordia game demonstrated the strengths of Macalester’s team. From Sohrabi and Akimoto, two accomplished senior rushers, to Nadeau’s connections with Desso and Bice, the Scots have both the experience and seniority to command the field and younger players learning to take the lead. Neve’s steady kicking holds down the special teams while the defensive power of Lundt, Joshua Strickler ’23, Wright and Bresson is coming together well. Lundt and Strickler, in particular, are third and fifth respectively in the MIAC for tackles per game. Lundt is averaging 8.6 and Strickler lags just behind with 8.2.

In the coming weeks, Macalester’s best hopes to improve their record lie in their upcoming game against Hamline University — on Oct. 30 — who is also off to a 0-1 start in the division. They will also look for a win against Augsburg on Oct. 16 and St. Scholastica on Nov. 6. The looming challenge on their schedule is Bethel University who they will face on Oct. 23. Bethel is currently ranked 17th in the American Football Coaches Association Top 25 and 16th in the D3Football.com rankings. This past weekend they beat Augsburg 49-7.