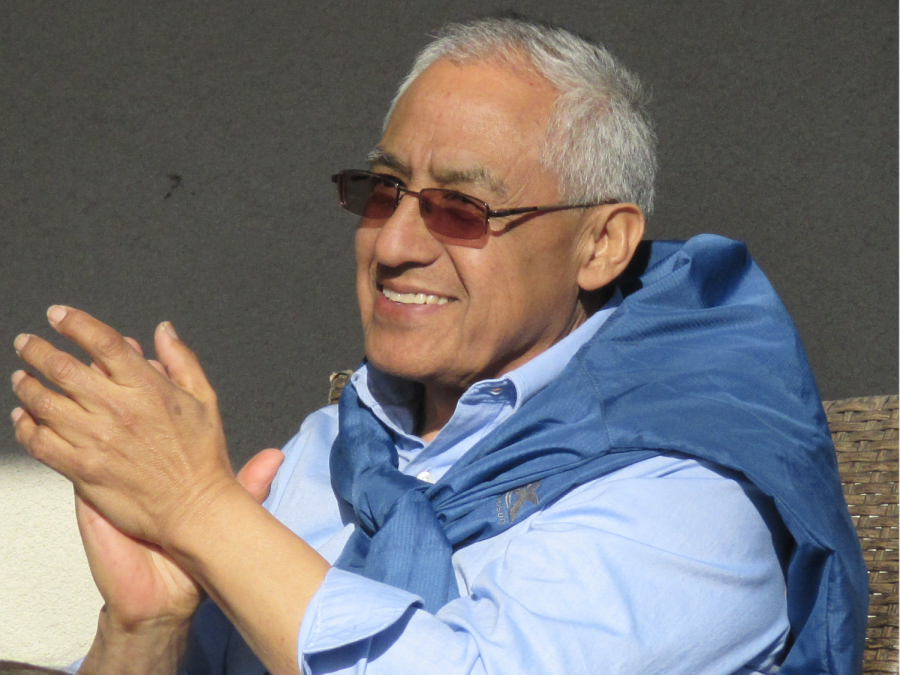 Since 1986, Spanish professor Galo González brought a distinct energy and light to Macalester. He was known for his love of poetry, of literature and of dance. You always knew his class was in session when you heard chatter and music bursting from a classroom in the Humanities building.

Last November, González passed away from cancer, shortly after teaching his last class in the first module of the fall semester. This week, almost a year later — and one day after what would have been his 72nd birthday — the Department of Spanish and Portuguese hosted a celebration of his life with music, poetry and storytelling.

During his more than 30 years at the college, González’s energy, enthusiasm and compassion shaped his department and the students who came through it. Professor Molly Olsen came to Macalester in 2006, when González was the chair. From that point on, she said, he was central to the Spanish program.

“He was the ethical center of our department, like the axis around which everything rotated,” Olsen said. “Even when he was sick and sometimes not present, he was still present.”

This week’s event to say goodbye to González was long anticipated. The department had to wait to do a celebration until vaccines and the COVID-19 situation made it possible to be in person with food and music, as González had wished.

Several professors remember González as one of their first friends at the college. From their first encounters with him, his colleagues say, he stood out from the everyday hustle of academia.

Professor Claudia Giannini met González in her first days at Macalester, when she joined the faculty as a visiting instructor in the Spanish department.

“He invited me to his office. He was the only one who did that,” Giannini said. “I was the most junior, but he was the most senior faculty member. And he spent more than an hour with me, asking me about what I was interested in and telling me about his classes, too… I was so impressed.”

Quick hellos with González often ended up lasting an hour. He was always curious, and he had a knack for drawing people into his unhurried conversations. Meetings with him meandered from stories of his son to discussions of poetry to tales of his at-home menagerie of dogs, snakes, rabbits and parrots.

For coworkers and students used to deadline-driven schedules, talking to González was a welcome change.

“He lived in a different time dimension,” Giannini said. “Time was not linear for him, it was like a circle. He made it last longer.”

Although he was a professor in the Spanish department, González was known across campus for his work and disposition. During his time at Macalester, he served on several advisory and hiring committees for various departments. He also assisted with the creation of the American studies department. This week’s event gave a nod to his reputation across campus — attendees came from across departments and offices to celebrate his life.

“He was, in my mind, the closest to what I think an intellectual should be,” Giannini said. “He was genuinely curious about learning about the world and sharing with his students, sharing with his colleagues, sharing his time, his knowledge, his wisdom.”

His generosity and passion for teaching made González a popular professor. Several of his former students came to his on-campus memorial, speaking to his kindness and his constant encouragement as an advisor.

“Professor Galo brought joy to my learning, brightening the darkest of winter days,” wrote Mae Sullivan ’22 for the event’s program. “I will always appreciate his kindness.”

Spanish professor Teresa Mesa co-taught a class with González when she first arrived at Macalester in 2006, and collaborated with him again in the summer of 2020 as they adjusted their courses for remote learning. She looked up to his dedication to his students.

“What I learned from him — one of the most important things — is his generosity with his students,” Mesa said. “Even in his lowest moments he was enthusiastically devoted to his teaching. The stories that we shared, and the advice that I got from him about education, changes, difficulties, challenges with children, relationships — I will keep that with me for sure.”

Giannini found a collection of letters last year that students had written about González when she nominated him for a teaching award. She was struck by his response when he won Macalester’s Thomas Jefferson Award for teaching in 2018.

“I remember he said… ‘I have learned more from my students than I have taught them,’” Giannini said. “He was so humble.”

González brought that humility and a conciliatory attitude to Macalester’s Spanish program — traits that the department hopes to keep alive.

“There is a before and an after Galo,” Mesa said. “A lot of us agree on that.”