Students express lack of interest in running for MCSG 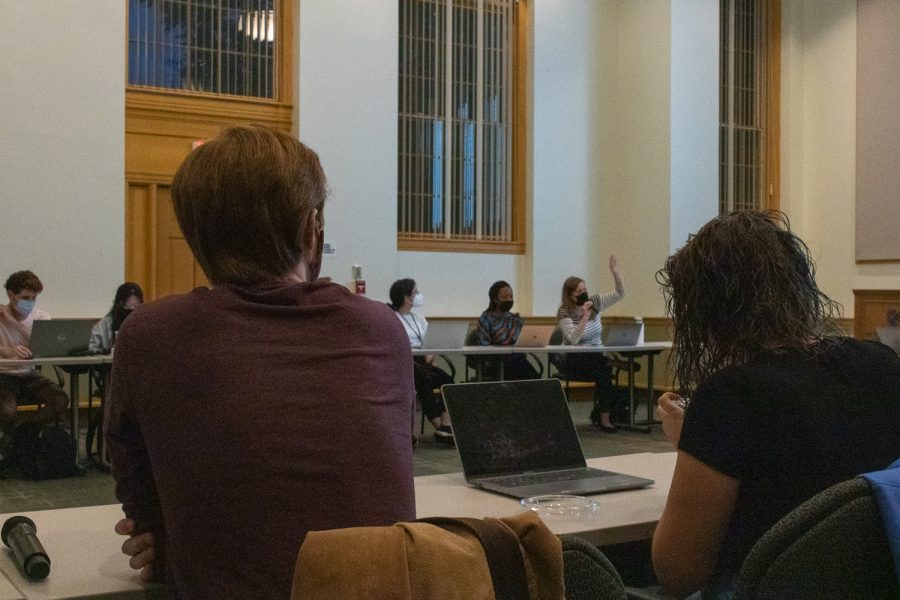 MCSG kicked off the year with multiple unfilled positions and a record-low filing for candidature. Other members of the student government, who have had to pick up the slack, say the school must reconsider its treatment of representatives. Current and past MCSG members cite time constraints, lack of compensation, the stress of elections and poorly defined expectations of MCSG as deterrents for potential applicants and returners.

“This year, half our executive board was empty, [and] frankly it was on our committee advisors and myself to try and fill in the holes,” MCSG President Shreya Nagdev ’22 said. “At the end of the day, if students don’t file for MCSG positions, we actually lose quite a bit of representation within bigger college groups, like board meetings [and] hiring committees.”

MCSG is a considerable time commitment — at least two hours for legislative board meetings per week and an extra hour for every other committee that students join. The mental and emotional demand of student government extends beyond these meetings.

Sami Banat ’24 served as a student government representative for the 2020-2021 academic year, but chose not to reapply this year due to time constraints.

“When you add in prep time, coordinating with others, drafting legislation and all the work going on behind the scenes, it really adds up,” Banat said. “I think that’s a big part of why students aren’t applying.”

Lola Brown served as student representative for the class of 2023, but chose not to continue MCSG this year. She noted that many students lack the information necessary to apply, or simply lack interest in student government affairs.

Some schools offer academic credit for participation in student government. Others count student government positions as work study opportunities. MCSG does not offer either of these compensations, discouraging some students from applying.

“Time is limited, and unfortunately some of us don’t have a choice,” sophomore class representative  Bobbie Pennington ’24 said. “When push comes to shove and you can’t fit anything more in your Google calendar, which position is going to give? For some of us it’s going to be the unpaid position.”

Students, especially juniors and seniors, must also make the difficult decision between MCSG and study away. Candidates who study away have to run on a split ticket, with one person representing in the fall and one in the spring. This complicates the process and requires a great deal of coordination — an experience that many students turn down if they are in the middle of planning a semester abroad. In addition, representatives who study away are immediately disqualified from membership on the executive board for the year.

The election process is also stressful and time consuming for candidates.

“Campaigning took a lot out of me,” Nagdev said. “I’ve run campaigns three times now, and each time I have found myself relying on friends to help me get through my classes during that week.”

Pennington added that the student body’s perception of MCSG may be disheartening for prospective representatives who invest so much time and energy without further compensation.

“There’s a disconnect between what MCSG does and what students actually see,” Pennington said.

For this reason, some students perceive MCSG as “inefficient, overly bureaucratic and generally unsuccessful at accomplishing its goals,” Pennington said. “Students who don’t have stakes in MCSG may not pay as much attention to the organization’s work, and so they may not recognize the impacts of the government on campus life.”

Nagdev acknowledged this issue and said that MCSG is working to create more open spaces for representatives to communicate with their constituents and the college at large.

Some current and former representatives say that task shouldn’t just be on the students. Brown thinks part of the problem is a lack of clarity around what MCSG is able to do.

“For student perception of MCSG to improve, the power of the body itself needs to be addressed and clarified not only from burnt-out legislative body members, but from admin directly,” Brown said.

MCSG is trying to get the ball rolling on addressing the issue. At its Tuesday meeting, MCSG discussed the possibility of paying representatives.

“Folks are committed to doing important work,” Banat said. “It would be helpful for that work to be appropriately compensated … That could be an important solution to getting people involved and applying for MCSG.”