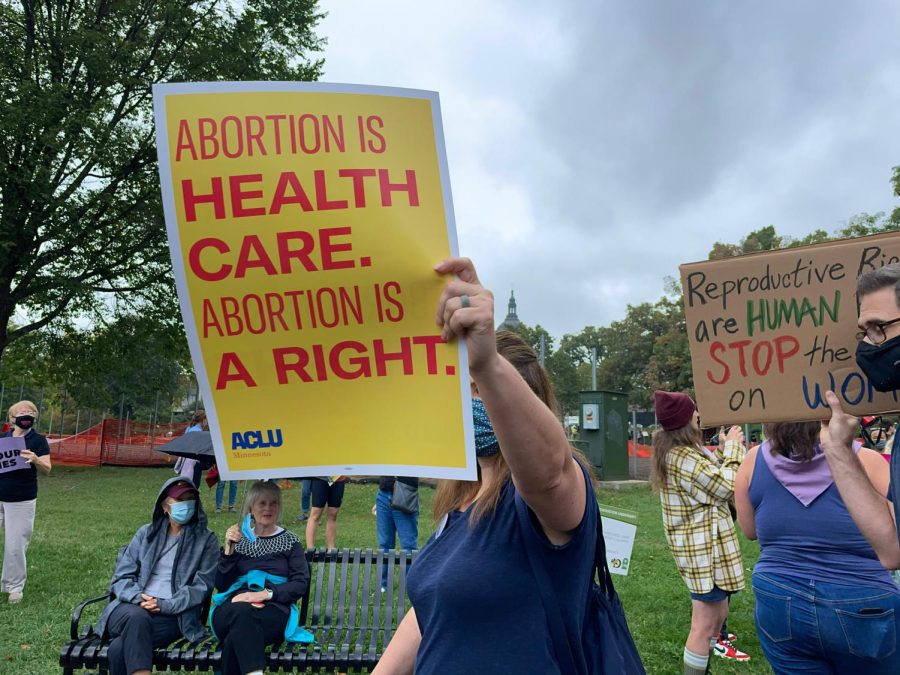 ​​Met with counter-protesters and turbulent weather, UnRestrict Minnesota led other organizations in the Bans Off Our Bodies: March for Reproductive Freedom. The march was one of 650 across the nation, intent on emphasizing the need for the preservation of reproductive rights.

One of the primary aims of the march on Oct. 2 was to protest inaction from the Supreme Court on laws pertaining to bodily autonomy, such as the recent abortion ban in Texas in which the Supreme Court refused to intervene. This is a case some believe could be imminent for more conservative states across the upper Midwest, and one that could threaten abortion laws in Minnesota.

“If, and whenever Roe v. Wade is overturned, Minnesota will become the only state in the upper Midwest where abortion care will still be legal,” Campaign Manager of UnRestrict Minnesota Erin Maye Quade said.

“Threats to Roe are concerning,” LyLy Vang, Board Chair of Our Justice, said. “We need people to channel the energy here today to sustain commitment to access.”

“These conditions are not just a matter of individual choice and access,” UnRestrict Minnesota’s agenda for the march stated.

“This march is us really coming together to show up and show out because right now [reproductive freedom] has been under attack, and we’ve come to a critical point,” Quade said. “We need that show of force.”

Quade ran the show on Saturday, emceeing the rally at Loring Park after the march from the Minneapolis Sculpture Garden. Shayla Walker, vision realization advisor from Our Justice, spoke first, and the energy was high.

“We are not going back,” Walker shouted from the stage.

“We are not going back,” the crowd repeated after her.

Katie McCarthy ’22 was involved at the march as a chanter. She reached out to Women’s March Minnesota Board Member Kris Ragozzino, one of the march’s organizers, offering her support.

“I think they wanted some college-aged, loud women to lead,” McCarthy said. “I really enjoyed it.”

Through Burst the Bubble, an established arts for change program in the Civic Engagement Center at Macalester, she also assisted other Macalester students in finding buddies and transportation to the march. About ten students signed up through that program, but she connected with many more students outside of Burst the Bubble.

McCarthy said that now is an important time for students to show up for what they care about, especially for reproductive freedom.

“It’s really easy to assume that reproductive justice exists, and now that it’s so clearly under attack, I think now’s the time for people to start really showing up, whether that’s with their bodies, with their money, with their time,” McCarthy said.

One of the more powerful things she saw was the amount of older people fighting for reproductive rights, even after advocating for decades.

“It was kind of scary to be like, that could be me, and it’s also equally exhilarating,” McCarthy said. “There’s this community of people who’ve been standing up and who continue to stand up.”

Although generally having the same goal of standing up for reproductive rights and freedom, marchers had different motives and experiences.

“If abortion is murder, then a blow job is cannibalism,” Vanessa Simmet’s sign read. She came to the march with her mother and daughter, and the three generations were all equally passionate about the cause.

“After college, I marched for the RU486 pill, and so I just can’t believe it,” Simmet said. “I can’t believe we’re still doing this shit.”

Melanie, who chose not to share her last name, came to the march with her 14-year-old daughter, Claire. Melanie raised Claire while being open about abortion and educating her on the topic, and it was the first march for reproductive freedom Claire had attended.

“We’re here to stand up for others to have the right to make that choice,” Melanie said. “I’m standing up for her rights, and so is she.”

“We’re standing up not just for women’s rights, but trans men’s with uteruses and non-binary people, intersex women,” Claire said.

A recent graduate from the University of St. Thomas, who wished to remain nameless as her mother is anti-choice, had an abortion. She acknowledged how difficult it was, so at the march, she advocated for preventative action with her sign.

“It is incredibly emotional … nobody wants to look at a pregnancy test and be like ‘s-h-i-t, what am I going to do,’” she said. “Let’s make it so the least amount of women, or people with vaginas, possible are having to make that decision.”

Amy Klobuchar (D-MN) made an appearance, praising the thousands of people who showed up for standing up for people to have the right to choose what kind of reproductive healthcare they want. She also conveyed that persistence is a necessity in this fight.

“Enduring change happens one step at a time,” Klobuchar said.

By this time, the rain had begun coming down harder. However, it did not deter the crowd from cheering or the speakers from preaching the right to choose to have an abortion. Nature Keletso Inger, a human rights activist from Botswana, said that where she is from rain is a good sign, all the more encouraging the people there. She also spoke about how much of this is on the lawmakers.

“The laws that they are putting in place are an act of violence,” Inger said.

Minnesota State Representative Athena Hollins (D-St. Paul) reaffirmed this sentiment. She expressed to the audience how bills to restrict access to abortion were in Minnesota’s State House chamber this last session. Lieutenant Governor Peggy Flanagan upheld the previous speakers’ points, adding that “abortion” is not a bad word and that to fight, the crowd must stand strong.

Speakers, including Planned Parenthood representatives and politicians, said that abortion is healthcare, and, as such, is a right. Marchers seconded this statement.

“Abortion care is safe, affirming medical care that should be available to all of us, as part of the spectrum of sexual and reproductive healthcare,” Nicole Chaisson, associate medical director of Planned Parenthood North Central States, said.

Stephanie, a member of the audience who chose not to share her last name, held a sign that broadcasted messages about maternal death rates. She is a nurse, and her mother had a lifelong career in reproductive healthcare.

“Say they get cancer or something where they need to terminate the pregnancy for the health of the mother,” Stephanie said. “They should be able to do that.”

Dispersed throughout the program were artists, from singers and songwriters to drag queen Zon Legacy Phoenix, who performed cartwheels in thigh-high white stiletto boots on the wet stage. The performers also included poet Lenora Elaine.

“They say us women are made of too many thunderstorms, too many oceans, too many moon-high tides, and it makes men run, and so it makes me hide, but I still love,” Elaine said in her poem.

Quade spoke with The Mac Weekly after the rally and urged students to get involved and fight for what they believe in.

“We may never want or need an abortion, but we deserve, we demand the choice,” Yolanda Roth, representative of Take Action Minnesota, said.