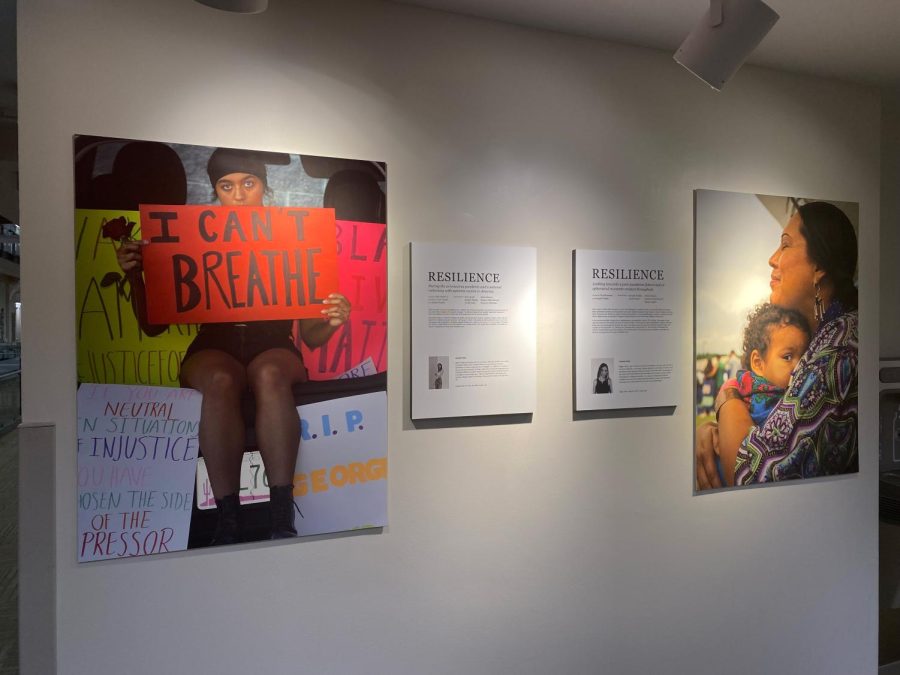 Members of the Macalester community gathered in the center of the Smail Gallery in Olin-Rice for the opening of the gallery’s 2021-2022 exhibition “Resilience — Looking Towards a Post-Pandemic Future and the Ephemeral Moments Throughout” on Thursday, Sept. 30. The exhibition opening was coordinated by the environmental studies department as part of their “EnviroThursday” weekly events. Attendees heard from those involved with the exhibition, including the three grand prize winners, over snacks and drinks before looking at the photos hung on the walls around them.

The grand prize winner is Maija Hecht ’22. Hecht’s submission is a photo of CEO of the Minnesota Indian Women’s Resource Center Marisa Miakonda Cummings holding Dani, the two year old daughter of Cumming’s close friend, Nikki Pieratos, co-founder of vertical aeroponic farm Harvest Nation in northern Minnesota. The photo was taken at the Bois Forte Band of Chippewa Pow Wow. According to the photo description, Hecht sees this photo representing how care is an act of resilience, something that had “become clearer” to her over the past year.

The second and third prize winners are Shosuke Noma ’23* and Sam Ding ’22, respectively. Noma’s submission is a self-portrait of Noma in a mid-dance pose surrounded by the graffiti that covers the entrance to Macalester’s student-run bike shop in the basement of Doty Hall. At the exhibition opening, Noma explained how breakdancing helped him build confidence over the course of the pandemic, especially after taking Hip Hop Performance with Harry Waters Jr., former professor in the theater and dance department, last springDing’s submission is of a man waving a Black Lives Matter flag in downtown Minneapolis on the day that former Minneapolis police officer Derek Chauvin was found guilty on all charges in the murder of George Floyd. At the exhibition opening, Ding explained how being in the crowd in Minneapolis when the guilty verdict was announced held special significance because he had not been in the country when Floyd was killed and nationwide protests followed in May 2020.

The exhibition is a continuation of last year’s exhibition “Resilience,” which aimed to capture the moments of resilience in 2020 through photos taken by Macalester students. The gallery is displaying both last year’s submissions and this year’s, collectively showing student’s visions of resilience and how it has changed since last year.

“I think it says a lot about where we’ve been and where we’re going,” Roopali Phadke, professor and chair of environmental studies, said during the exhibition opening.

Phadke worked with Priya Baumann ’22, the curator, on the exhibition over the summer. Baumann was recommended by Kori Suzuki ’21, the curator of last year’s exhibition, to helm this year’s exhibition. After reaching out to students for submissions in May, Baumann collected photos over the summer. In August she put together a panel of judges, primarily professors. During the second round of judging, Baumann wanted to get a student’s voice involved, so she brought MCSG Student Body President Shreya Nagdev ’22 on board as an additional judge. After the judges made their decision, Baumann had about a month to curate the entire exhibition.

“I don’t think I’ve honestly really processed that it’s done for me yet because it was such a time-consuming and energy-consuming project,” Baumann said.

Despite the short timeline, Baumann enjoyed seeing it all finally come together and having students see the curatorial work she’s done and the “beautiful” photos that students from a variety of different majors had taken. From her perspective, Baumann thinks that people should visit the “Resilience” exhibition because it captures this historic moment in our community and the world through the point of view of students.

“I think it’s really important to talk about or see the resilience in this time because it’s a time of a lot of struggle, a lot of negativity, but also from that, you can see a more positive side even if it doesn’t come off as that right away,” Baumann said.

The exhibition will stay up in the Smail Gallery throughout the academic year, and Phadke plans on sending the submissions to the college archive.

*Shosuke Noma ’23 is Photo Editor of The Mac Weekly