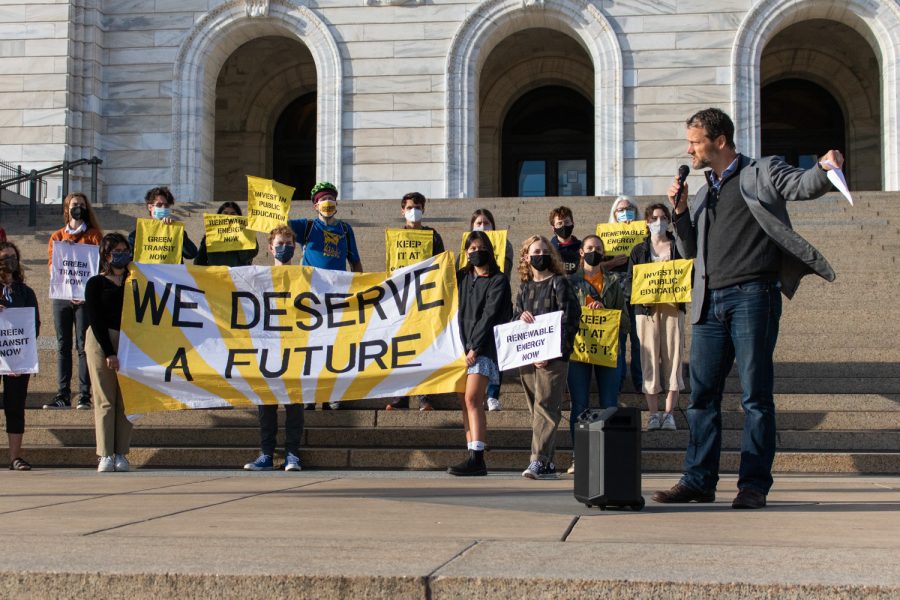 On Tuesday, Sept. 21, Sunrise St. Paul organized a rally to demand that Senators Tina Smith (D-MN) and Senator Amy Klobuchar (D-MN) recognize the severity of the climate crisis and to claim that young people deserve a future.

Currently, the U.S. Congress is considering several bills that have varying degrees of investment in climate infrastructure.

Macalester students and community members were among those who gathered on the front steps of the Minnesota State Capitol and called on Minnesota senators to pass the version of that infrastructure bill with a price tag of $3.5 trillion.

Hufsa Ahmed ’24, who was a main organizer of this rally, described this bill as a “once in a generation political bill to invest in the infrastructure of the future.”

Ahmed, who is from St. Paul, has been involved with Sunrise since the fall of 2020.

Sunrise St. Paul is one action hub of many in the national Sunrise movement. The rally last Tuesday was part of a coordinated national action, with local hubs rallying to call on their senators to pass the bill with the most investment in climate infrastructure.

The rally in St. Paul featured speakers from the Twin Cities and Minnesota explaining the importance of this legislation. These speakers are all working to bolster local climate infrastructure in a wide array of sectors including education, public transportation and renewable energy.

Ahmed said that hearing from these local speakers with different backgrounds and fields was inspiring.

“Being able to see how this infrastructure bill can impact so many different sectors was so cool,  and then being able to hear people’s personal stories as well was super cool,” Ahmed said.

One speaker was Robert Blake, who is the founder of Solar Bear, an Ojibwe-led solar installation company based in Red Lake, Minn. Solar Bear wants to create a tribal utility and a renewable energy grid while also creating green jobs for the Indigenous community.

“That’s why this $3.5 trillion needs to pass, because then we can do more work,” Blake continued.

Ahmed also elaborated that this measure needs to pass because this generation is facing the brunt of the climate crisis, and the infrastructure bill has the potential to alleviate that.

“It’s almost like we have no choice but to fight for this and put it as a priority,” Ahmed said. “Very very soon the climate crisis is gonna catch up to us and we’re seeing effects of it right now with hurricanes and floods and extreme temperatures and food shortages.”

Overall, Ahmed was happy with the rally and was excited about the energy that was present there.

“At the rally there was a lot of momentum,” Ahmed said. “I think everyone that was there really cared about the message we were trying to push across. It felt like a really fun community.”

Congress will vote on the infrastructure bill on Thursday, Sept. 30. Depending on the outcome, Sunrise St. Paul may do some follow-up actions. They will also be working with other environmental justice groups in the area to create educational programs on climate-related issues and local elections’ impact on climate policy.

The hub also plans to continue working in solidarity with Indigenous organizers in the fight against Enbridge’s Line 3 oil pipeline, even as the pipeline goes into operation in the coming weeks.

Ahmed explains that Sunrise is always looking for new members so that the hub can expand and evolve.

The best way for Macalester students to get involved with Sunrise, Ahmed said, is by attending their Sunday meetings at 5 p.m.

The organization is currently meeting one week on Zoom and the next week in person to accommodate the members of the hub who live throughout the Twin Cities.