Administration pays for students to live in off-campus luxury apartments 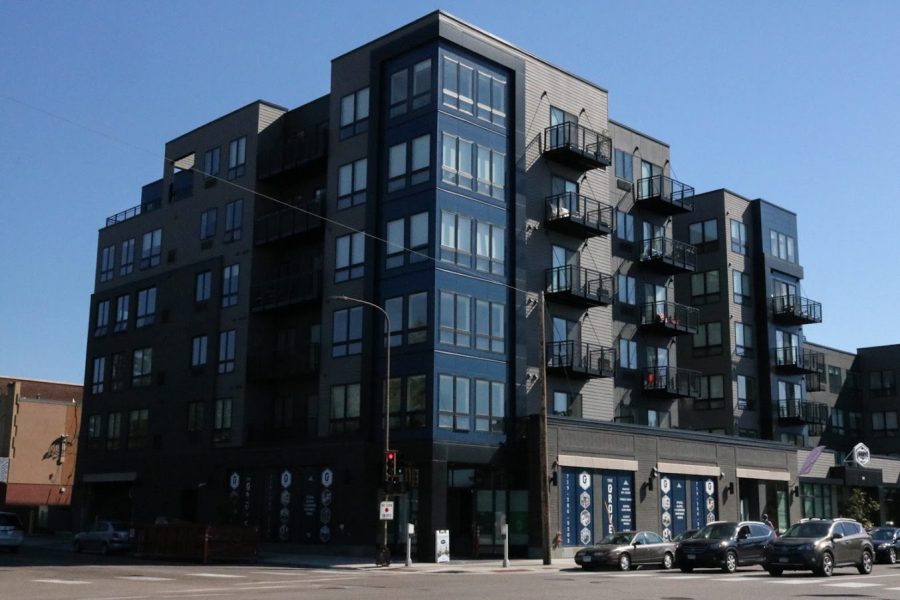 Last spring, it became apparent to the Macalester administration that the school would not have enough on-campus housing for every student with a housing contract due to the large amount of incoming first-year students. So, in June, Residential Life began reaching out to juniors and seniors to offer them the opportunity to live in The Grove.

The Grove is an apartment building just across the street from Macalester’s football stadium. It describes itself as a luxury apartment complex. As of this week, The Grove’s 2 bedroom, 1 bathroom unit costs from $2,252 to $3,753 a month for a 12-month lease.

“The college had to make a decision about how they were going to house all the first-year incoming class,” Associate Director of Residential Life Kyle Flowers said.

About a year ago, when The Grove was first built, Macalester came in contact with the property in anticipation for a situation like this. They ended up renting out five rooms for ten students for the 2021-2022 school year.

According to Interim Vice President of Administration and Finance Patricia Langer, due to Macalester’s corporate partnership with The Grove, they are not able to disclose how much they are paying the apartment complex.

“The Grove has been a good neighbor to Macalester since before they opened, and I am comfortable with the financial agreement we have with them,” Langer wrote in an email to The Mac Weekly, when asked to elaborate further on the cost placed on the school.

However much Macalester is paying the Grove, students are still paying Macalester the regular housing cost and have the option to go off the regularly required meal plan.

“I don’t believe the college wanted to give an option to students to make a change and assignment quickly but then have students pay more,” Flowers said.

Residential Life’s priority was assuring the students that they would have housing, no matter their final choice, and giving them all the information they needed to make their decision.

“We wanted to make sure that students knew… that their housing was secure,” Flowers said.

Residential Life looked for students who had already lived on campus for the required two years and then sent an email to the selected students asking if they would be interested in the opportunity to live off-campus.

For Ira Langdon ‘23, the decision was not difficult to make.

On June 23, Macalester Residential Life contacted Langdon and offered them, in an email, the “one-time opportunity to live in a luxury apartment at The Grove.” Originally they had planned on being housed at Kirk, but when informed by Residential Life that the cost of living would not change, Langdon elected to head to The Grove.

“It was really easy because it is so close to campus, and is a much nicer space,” Langdon said.

Residents are not required to be on the meal plan, internet and utilities are completely included, and each apartment leased by Macalester includes basic furniture from the dorms.

This is not the first time that Macalester has had to consider moving some students off-campus to make room for incoming first-years. While Macalester has never worked with The Grove, the apartment’s parent company is no stranger to these types of partnerships. It has worked with other landlords and complexes in the area.

“Some companies won’t allow it,” The Grove’s Community Manager Jon Bruss said. “It depends on where you’re at with your property and what you do have available.”

For example, one of The Grove’s parent company’s properties is near a John Deere factory.

“80% of it is what’s called corporate housings,” Bruss said.

Previously, Macalester has looked at partnering with other apartment buildings as a corporate housing deal. In a corporate housing deal, the financial responsibility for an apartment falls back on a company, in this case Macalester. The last time this type of situation happened was in 2018, when the school had a large amount of first-year students.

“My understanding is this arrangement will conclude at the end of the school year,” Dean of Students Andrew Wells said.

While Langdon is grateful that they have the opportunity to live in this luxury apartment building, they did not shy away from the strangeness of the situation.

“A weird psychological point of living there is that, doing the math, in order to reasonably afford these apartments you’d need to be making just an absurd amount of money,” Landon said. “The fact that I won’t be making that in maybe a few decades and now, living in it now: truly absurd.”