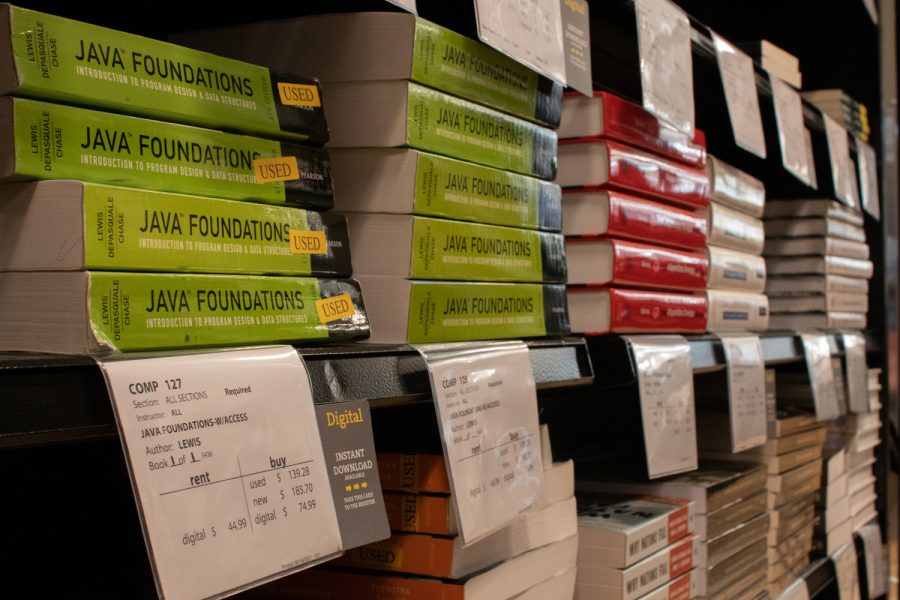 Macalester is considering the adoption of a new textbook rental model that is intended to relieve students’ financial burdens, especially those who are low-income. However, the downside is that the program will cost many students a significant amount of money.

Under this model, called the Barnes and Noble First Day Complete, tuition would increase by $827 per year, or over $414 per semester to cover course material costs. Macalester would divert this extra revenue generated from increased tuition to a Textbook Grant Fund, which would be awarded to the 20-25% of students with the most financial need. Those students would, therefore, not have to pay for their textbooks.

Macalester’s Financial Barriers Working Group (FBWG) proposed this program to provide lower income students with support in acquiring course materials to combat a surge in textbook prices. They have created a website laying out the background and logistical information about the program, as well as a form where the Macalester community can leave their input. Student response to this proposal has been mixed.

Three Macalester students, A’di Dust `23, Phoebe Thoroughman `23, and Kanon Nakajima `23 have initiated a petition against the new textbook model. The petition brings up a variety of issues with the proposed plan, including the fact that the amount of money students would have to pay is too much considering that the textbooks are only rented. Another issue the creators of the petition brought to light is the timeline of this proposed plan. Dust commented that students were only notified of this plan a week ago, considering that the deadline for the school to make a decision is coming up quickly on Oct. 31.

“I think in the future, if the college was not just more transparent about what they’re doing but also giving us time to make our voices heard, the problems that we have with these, we should be able to bring them up [sooner],” Dust said.

Assistant Vice President of Admissions and Financial Aid Brian Lindeman emphasizes that the FBWG is proposing the Barnes and Noble First Day Complete model with the financial well-being of Macalester students in mind. He cites a quantitative survey project that the groups conducted in conjunction with the sociology department during module three last year, as well as ad-hoc informational sessions to spread awareness of the proposal over the summer. Other universities implemented this program with positive (albeit limited) feedback so far, Lindeman claims.

“We wouldn’t be having this discussion if supplies were affordable,” Library Director Angi Faiks commented. In the long term, Macalester hopes to move away from expensive learning materials towards low and no cost open education resources so that learning materials are accessible to all students.

Faiks stated that this program, if implemented, would take a lot of pressure off of low income students. She emphasized that one important goal of the program is to create possibilities that would serve the most people.

“I see it as a social justice issue,” Faiks said, applying the implementation of the new program to broader efforts to increase access to education everywhere.

The FBWG is considering offering a path for students to opt out of this program, although Lindeman worries that if too many students opt out there won’t be enough money to generate grants for low income students.

The FBWG discussed the program with MCSG at their Legislative Body meeting Tuesday night, where Faiks and Lindeman addressed many student questions and concerns. Faiks and Lindeman emphasized that more input is needed from members of the Macalester community in order for a lot of the questions to have more clear answers.

The FBWG will consider further student feedback from the survey listed on their website before deciding whether or not to move forward with the program. The group hopes to make a decision by Oct. 31 in order to implement the new model by fall 2022.