Interning in the time of climate crises: new MacNest program 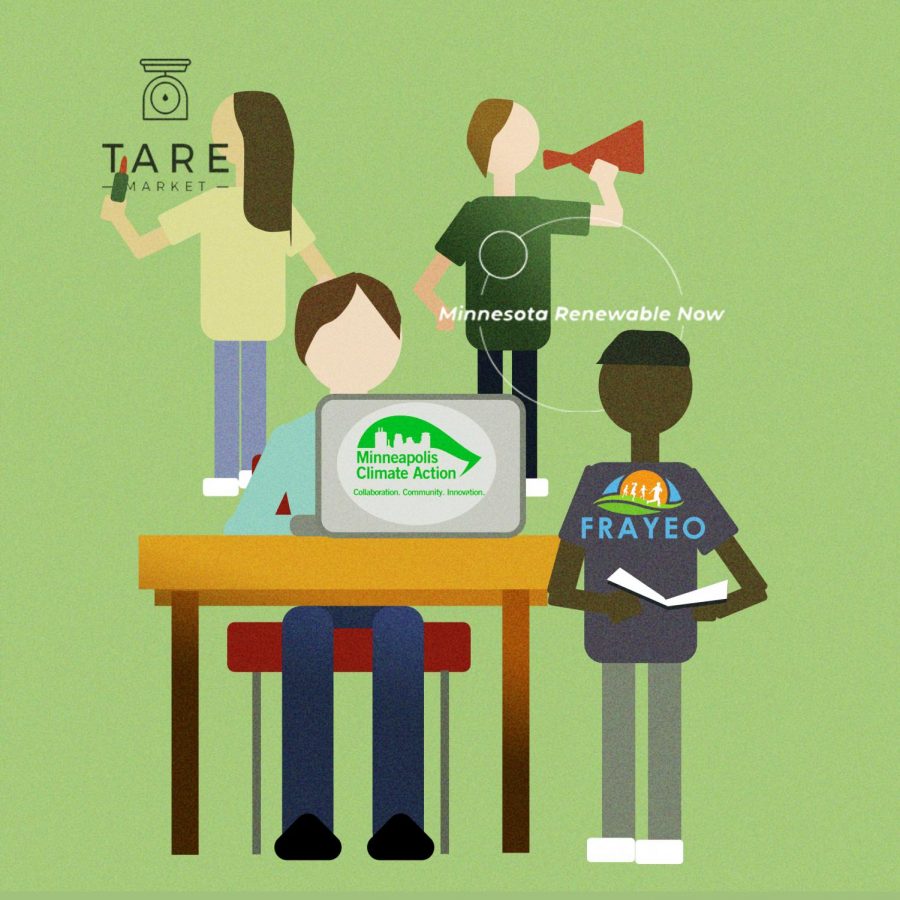 When CJ Denney ’23 started his summer internship at Minneapolis Climate Action, an environmental policy and community organizing non-profit, he wasn’t sure at first what his role would be. Soon, however, Denney said he found himself in the thick of community outreach work, organizing discussion groups around environmental injustices and helping plan community events.

Donors Dr. Margaret Rick ’64 and Dr. Paul Rick ’64 both inspired and funded the Climate Justice Internship Program. Alumni who first met as students, Margaret and Paul worked closely with Interim Director of Entrepreneurship and Innovation Jody Emmings and Director of Sustainability Christie Manning to design an internship program that would have a two-pronged positive impact.

“We wanted to create a program that would increase awareness and action about climate change that involved students,” the Ricks wrote in an email to The Mac Weekly. “In addition, funding the climate justice internships provided an opportunity for us to promote student self-discovery and personal advancement.”

The Ricks have set up funding for the MacNest Climate Justice Internship Program to be offered for the following two summers and to allow for a cohort of four student participants each year.

While the Sustainability Office and the Department of Entrepreneurship and Innovation have contributed to a number of shared projects such as student food co-op initiative MacSHARE and skill-share days in the Idea Lab workspace, the Climate Justice Internship program is the first formal collaborative project between the offices. According to Manning, the two offices’ partnership is just one of the bonds created by the program.

“MacNest climate justice internships built durable new relationships — between the students and their mentors/supervisors, between the students and a new part of the Twin Cities (three of the orgs were located in North Minneapolis), between [the Department of Entrepreneurship and Innovation] and the [Sustainability Office], between our campus and these organizations,” Manning wrote in an email to The Mac Weekly.

Emmings said that the Sustainability Office offered a unique expertise on climate justice that paired well with the innovative vision of her own department.

“Entrepreneurship is a methodology to work on problems and environmental and climate justice is at the heart of a lot of Macalester, what Macalester students care about,” Emmings said. “It’s really a natural partnership.”

Part of Denney’s work with Minneapolis Climate Action included lowering barriers to education about climate change. He helped the non-profit host an event for kids in the Whittier Park region of Minneapolis to have casual conversations about climate change and environmental protection. Additionally, he contributed to a community solar garden program which offers accessible solar energy to households without credit or income minimums.

“That was kind of a big thing because a lot of companies that create solar energy require you to have all of these eligibility requirements,” Denney said. “A lot of people just can’t meet those; usually it’s the affluent, white communities.”

According to Denney, his internship experience underscored how community is at the heart of successful climate justice work.

“People say it takes a village to raise a child, but in terms of the environmental justice movement — it takes a village to sustain that movement and raise and uphold each other,” Denney said. “It’s really all about working together to come to an equitable goal for everyone and involving all types of people and everyone affected into the conversation.”

Student participant Karsten Beling ’22 interned at Minnesota Renewable Now, a non-profit aimed at expanding access to renewable energy. He worked directly under founder and Minneapolis City Council candidate Kristel Porter. Beling said his duties took on different forms depending on where he was needed most, from grant applications to event planning — an experience he said he thinks is characteristic of non-profit work.

Beling has experience in climate activism work as a co-founder of a Sunrise Hub (community organizing units of the national Sunrise Movement environmental advocacy organization) in Walla Walla, Wash. before transferring to Macalester last fall. At Minnesota Renewable Now, Beling said that he witnessed firsthand Porter’s commitment to gaining trust in Minneapolis communities.

“Kristel [Porter] is from North Minneapolis and she knows everyone just walking down the street…I think when it comes to any kind of climate justice, or social justice work within BIPOC-dominant communities, they have to know a face or know the person – how Kristel described it to me is they have to know you before they could trust you, which of course makes sense,” Beling said.

According to Beling, interning under Porter gave him a new perspective on environmental justice work.

“Actually seeing her do that just reminded me how sensitive and cautious you need to be mindful of the history surrounding the racism and environmental work,” Beling said. “Relational organizing is, I think the keystone of this work. It just put in perspective to me like where I fit into this movement.”

Beling is from Park City, Utah where a wildfire this past summer forced many, including his family, to evacuate. He remembered having to tell his family what belongings he wanted them to bring with them and hearing that firemen painted the front of his house to mark that it was empty so that they wouldn’t have to look for bodies if it burned down.

“Luckily, my family had a place to go, but there were other people in my community who didn’t,” Belling said.

Beling cites an increase in climate disasters such as his hometown’s wildfires and late-August’s Hurricane Ida in the U.S. south as evidence of growing environmental threats to vulnerable populations and motivation for his work in climate justice.

“I think [climate refugees] are becoming more and more of a reality,” Beling said. “More of this is going to happen and we have to build up the resilience in communities like North Minneapolis that are especially vulnerable so that they can be better equipped to deal with these disasters.”

Katie Chin ’22 interned with TARE Market, a South Minneapolis based zero-waste company that sells eco-friendly household goods, beauty products and bulk foods and liquids. Chin said that her duties centered around making sustainable products accessible to low income communities in Minneapolis. She worked with stores across the city to get zero-waste beauty products onto their shelves and available to their customers.

Chin said that to her, climate justice is deeply connected to racial justice. She referred to Minneapolis’ own system of waste management,  believed  to disproportionately harm communities of color, as an example of the link between the causes.

According to Chin, witnessing community organizers through her internship made her understand the importance of local activism in a new way.

“Climate justice is a hard thing to get into because the problem is so big and it feels overwhelming sometimes,” Chin said. “But just seeing the smaller efforts that people are making every day and also seeing how those kind of add up into one larger community of climate justice, environmental activism — that was really inspiring for me.”

The fourth student participant in the Climate Justice Internship Program, Ahmed Abdalla Ahmed ’23 worked with the Fortune Relief and Youth Empowerment Organization (FRAYEO) a refugee-and-immigrant led group serving East African families in Minnesota. Ahmed is spending the semester studying abroad in the Netherlands and was unavailable for comment.

Today, Denney is working with the Clean Energy Resource teams at the Great Plains Institute, where he has already been able to use his non-profit connections and offer opportunities for grant funding to smaller organizations. Chin is interning with the Immigrant Law Center of Minnesota, a non-profit offering immigrant legal services as well as  advocacy work, where she said she hopes to tap into the relationship building skills she picked up at TARE Market. Beling is interning with the Ashoka Foundation, an organization offering funding to global “change-makers,” as part of the environmental leadership practicum of his environmental studies major. He hopes to use storytelling to share the experiences of people impacted by climate change to a broader audience.

Looking back on his summer internship experience, Denney acknowledged that working with a small non-profit to make a difference in his community often lacked structure.

“You can plan, plan, plan all you want but when it comes to actually putting on programs and getting people to interact and be part of your thing, it just always turns out differently,” Denney said. “But the positive side of that is…you can just let things flow and sometimes it turns out way better than it would have if everything went to plan.”