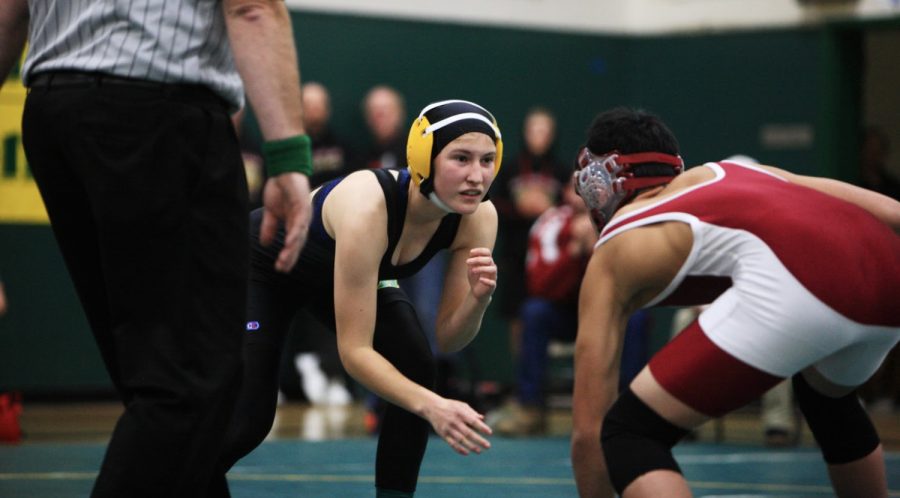 Outside on an eighty-degree September afternoon, Francesca LoPresti ’25 and Sofia Doroshenko ’25 are trying to explain the “Gable grip.” The “Gable grip,” known by other names, refers to an overhand/underhand wrestling grip where athletes tuck their thumbs in. According to LoPresti it is especially difficult to escape from. The name comes from famed 1970s wrestler Dan Gable, but now evokes images of University of Minnesota wrestler Gable Steveson — his namesake — who won a gold medal in Tokyo this summer in the men’s 125 kg freestyle competition.

Steveson, however, is not why we are talking about the grip. LoPresti, Doroshenko and Anna Andreasen ’23 are the three founders of the women’s* wrestling club at Macalester, currently in its first year. Though in name it is a women’s club, Andreasen clarified that it is a queer- and trans-welcoming space.

“A lot of sports do a poor job of being inclusive of the gender diversity that is out there,” Andreasen said. “I want to make this gender inclusive.”

All three people wrestled in high school. While Andreasen and Doroshenko wrestled on co-ed (all gender) teams, LoPresti wrestled on a women’s team at her San Diego high school. For women wrestlers, though, co-ed teams are the usual.

“I was the only girl on my wrestling team; the year before there was like one girl… but that’s basically it,” Doroshenko said. “There hasn’t been that many girls. I’ve been wrestling with men, so it’s really nice to get some change and wrestle with women. It’s a lot different, but I’m getting used to it.”

It is not just high schools where women’s wrestling is not afforded the same opportunities as men’s. Women’s wrestling at the collegiate level is currently designated as an “NCAA Emerging Sport for Women,” in all Divisions (I-III).

There are only three Division I programs which have specific women’s wrestling teams: Presbyterian College in South Carolina, Lock Haven University in Pennsylvania and Sacred Heart University in Connecticut. There are some Ivy League schools like Harvard and Columbia which offer women’s wrestling clubs and others that allow women to wrestle on the men’s team, such as Princeton. By and large, however, there are far fewer opportunities for women to wrestle in the NCAA.

In order for the sport to move from an “emerging sport” to an official NCAA championship sport, it needs 40 programs in a division. That means wrestling would need to add over 80 more programs to have official championships in each division. There are currently 38 programs or planned programs at Division II and III schools, including one at Augsburg University in Minneapolis. Ultimately, it is difficult for elite women’s wrestlers to get scholarships and competition opportunities at academically rigorous institutions.

LoPresti and Doroshenko described how they got offers from some programs at Division I schools, but both were not interested because they wanted academic rigor. Both described seeing athletically-talented men at their schools who were able to get scholarships to compete at prestigious institutions. LoPresti saw Macalester as a school where she could do both.

“It feels like everyone just wants the men to continue in college,” Doroshenko said. “But there’s not really much in wrestling for women to continue.”

“There’s honestly not a lot of academically rigorous colleges that have women’s wrestling teams,” Andreasen added. “There are getting to be more, but it’s still pretty limited — especially when I was looking at colleges [in the 2018-2019 school year].”

Andreasen thought she was done with wrestling in a formal manner, until she met LoPresti and Doroshenko who both wanted to start the club.

With its commitment to academic excellence and the ease of chartering student organizations and club sports teams, LoPresti decided to come to Macalester and start a women’s wrestling club.

“I was done with wrestling,” LoPresti said. “It was four years of my life and I was like, ‘Alright, I’m done with that.’ Then I took a gap year and I found myself tackling anybody that I could but also really struggling mentally to find something that gave me that natural high that wrestling did.”

Both Doroshenko and LoPresti have worked to start a women’s wrestling club since the beginning of the summer. They found Andreasen, and together they started the club this fall. Earlier this week, the Athletics Department okayed their purchase of a wrestling mat, adding a big vote of confidence to their month-old endeavor.

LoPresti is also working with a Division I geared organization, DI Women’s Wrestling, which helps students at Division I schools start wrestling clubs and begin the process for creating a varsity program. She said they have been helpful in understanding the process of chartering a new club and working with the Macalester Athletics department.

“I was really excited to find other people who wanted to start a club,” Andreasen said. “I definitely wouldn’t have had the confidence to go out and do that alone, but I really miss wrestling.”

So far, they have had a lot of interest, including interest from men who wish to wrestle.They tabled at the student organizations fair two weeks ago, and gathered almost 50 sign-ups. Often there are around 15 people showing up to practices and training in the Leonard Center, and everyone with any level of wrestling experience is welcome.

Despite the lack of formal institutional support for women’s wrestling in colleges and high schools, the U.S. is ranked second in the world after the 2020 Tokyo Olympics, and came away with a gold medal and two bronzes. Tamyra Mensah-Stock is the first Black woman to win the gold medal in wrestling. She won in the 68 kg category. Mensah-Stock did not wrestle at a DI institution; she went to Wayland Baptist University in Texas where she won the Women’s Collegiate Wrestling Association championship in 2014 and 2017 in the National Association of Intercollegiate Athletics.

She is the second American woman to win a gold medal in wrestling. The first, Helen Maroulis, won the gold medal in the 57 kg category at the Rio 2016 Olympics. Despite being from the U.S., Maroulis attended Simon Fraser University in British Columbia to wrestle at a Division II level. Both these women, in addition to 2020 50 kg bronze medalist Sarah Hildebrandt, were able to wrestle at a collegiate level, but not at a Division I level. That is what women’s wrestling advocates are hoping for.

“There are so many men at my school who got recruited to go to amazing colleges because they were great at soccer or they were really great at golf,” LoPresti said. “I felt like I was at a similar caliber to them athletically and in terms of dedication. I got offers; two very weird schools that nobody heard of where the academics aren’t emphasized at all, and I really wanted to give up.”

Though the ability to access Division II, III and club programs is important, the lack of Division I programs is troubling. Division I has the most scholarships available; without those, some women are unable to continue wrestling at the highest levels — both athletically and academically. Instead, they must go where they can afford, which often means leaving athletic dreams behind.

With this new wrestling club, wrestlers who want to continue their athletic career — whether that means aiming for an Olympic medal or learning a new sport — at Macalester will now offer that opportunity. This step creates more space for women who want to wrestle and want the type of academic challenge a school like Macalester advertises. Both Harvard and Colombia have women’s club teams, but many other small liberal arts schools do not. Carleton, St. Olaf and Grinnell, for example, do not currently offer women’s wrestling programs.

Ultimately, the three founders  want people to join and create a supportive, inclusive and strong community — regardless of prior wrestling experience.

“[Wrestling] was just one of the most important things to me during high school as everybody is figuring out their insecurities,” LoPresti said. “High school is terrible, but then you have like this family of girls, and we’re so bonded. I love them to death, and they still text me out of the blue, just to check up on me.”

*This club is gender-inclusive — trans and non-binary wrestlers are welcome.