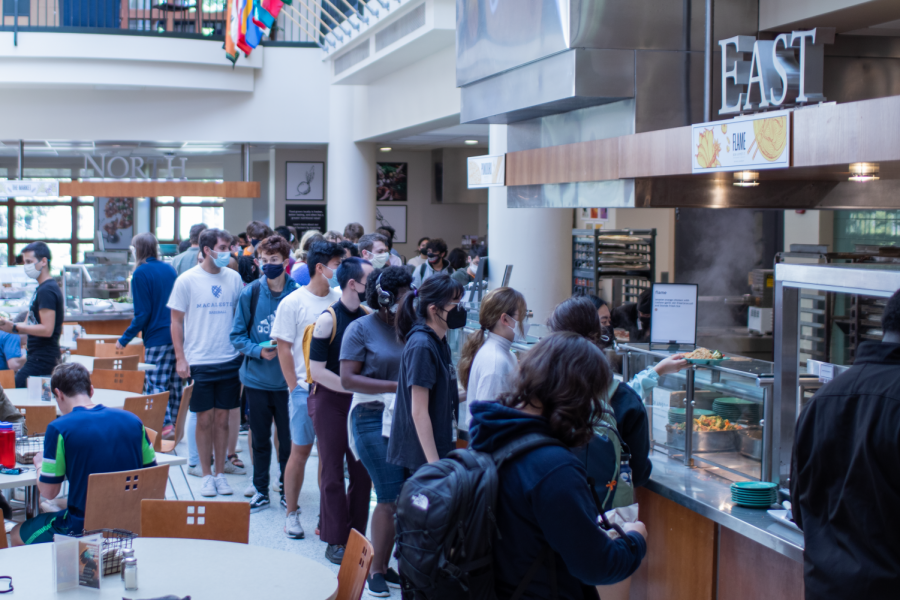 Across the U.S., food companies that serve college campuses are experiencing product shortages that have been directly influencing the amount of food that is available. Café Mac has been affected by these shortages, which in turn has been negatively impacting students.

Multiple students say they are not receiving enough food from Café Mac. Chris Sanders ‘24 described an instance at the Grille where they and their friend were ordering pizzas. Sanders’ friend received their pizza before them, and Sanders was disappointed when they received theirs.

Sène explained how when she was waiting in line at the plant forward station, one of the cooks came forward and told people in line to leave because the food was almost out.

These limitations are making dining especially difficult for students with dietary restrictions.

“I’m vegetarian, and they haven’t had as many options this year. Last year they did really well adding the plant forward line and stuff,” Nicole Higgins ‘23 said.  ”This year it kind of feels like they’re relying on that as their veggie option.”

According to Café Mac General Manager Amy Jackson, these issues are due to a combination of low food supply due to national product shortages, an unusually large freshman class, and the process of recovering from the COVID-19 pandemic.

Macalester College Student Government is aware of these issues and at their meeting on Sept. 14 motioned to form an ad-hoc committee. The committee will focus on specific issues relating to food shortages, lack of takeout containers, and the general COVID-19 risks that eating at Café Mac poses.

Some of the challenges Bon Appétit has been facing have been supply chain related, which means that there are lots of ingredients for meals that are in danger of being substituted.

“Our forecasting shows us that these supply chain issues will ease but are with us for the near term,” Jackson stated in an interview.

Jackson said that Bon Appétit is actively working to combat these shortages by taking actions such as proactively substituting menu items based on what supply chain risk communications say are unavailable.

Jackson described a situation last week where there was a rice noodle dish at the plant forward station. In the middle of meal service, Jackson realized that they were running out of products that were necessary in order to continue serving the dish. “I said to one of our cooks, ‘Hey, let’s get on top of it. What can we do? We need a substitution,’”Jackson said. “‘He’s like ‘I can just make some cilantro rice to substitute in.’ So sometimes you’ll see a change even halfway through meal service. Those are the types of things we’re doing.”

Jackson says Bon Appétit has communicated these issues with Macalester and that they will eventually ease.